At the time of this writing we only have 48 days left in Andalucia (before our big move to Mallorca).  We’ve been having a bit of early-nostalgia (can you have nostalgia when you haven’t even left, yet?) and we don’t want to regret anything. So we took a hard look at what we needed to do before we leave and we arrived at three things.

Not too long ago we decided to knock off numbers one and two on our list, and took a trip to Jerez with a day trip from there to Cadiz.

We took a 6 hour train and arrived just before dinner. We stayed in a really cool, eclectic apartment that was completely decorated with farming equipment. Our apartment was just behind a corridor filled with keys.

We walked over 45 minutes to go to the mall. This seems like a strange choice but we don’t do Spanish dinnertime. I don’t want to wait for forever for dinner. We also live in a village where the most interesting thing that could happen is someone shooting random fireworks off a church. A mall, with all the pretty colors and big food court can be very entertaining.

So we went to Taco Bell. Because it’s a treat, for us. The nice man behind the counter complemented our Spanish which was charming because we were, you know, ordering Mexican food in Spanish in Spain from a restaurant that is inherently American. Of course our accents were great because “quesarito” is barely a word in Spanish.

We walked the Taco Bell off with more investigation of the mall and then almost getting lost on the way home. Our phone, with the only map, died. But we got lucky and accidentally found the street we needed.

Jerez, like Almeria, Seville, Tarifa, Malaga and Granada – has its roots in Islamic history. These cities were always fortified with huge city walls and an alcazar/alcazaba. Alcazar literally means “palace” while Alcazaba means “citadel.” Some people say there is a difference in who built it (Moors vs Christians).

Jerez has a huge old city wall left over from this time. People usually just build around/upon the walls (if they don’t dismantle the wall for free building material).

The Alcazar itself was a big compound with living quarters, entertaining spaces, gardens, a mosque, a bath, and an underground water cistern.

View into the mosque:

The olive oil factory had something we had never seen before! A confusing massive press that was just completely absurd. Using entire trees lashed together to smash slowly over hours. Seriously, note the staircase in the background to see how stupid-big this is. 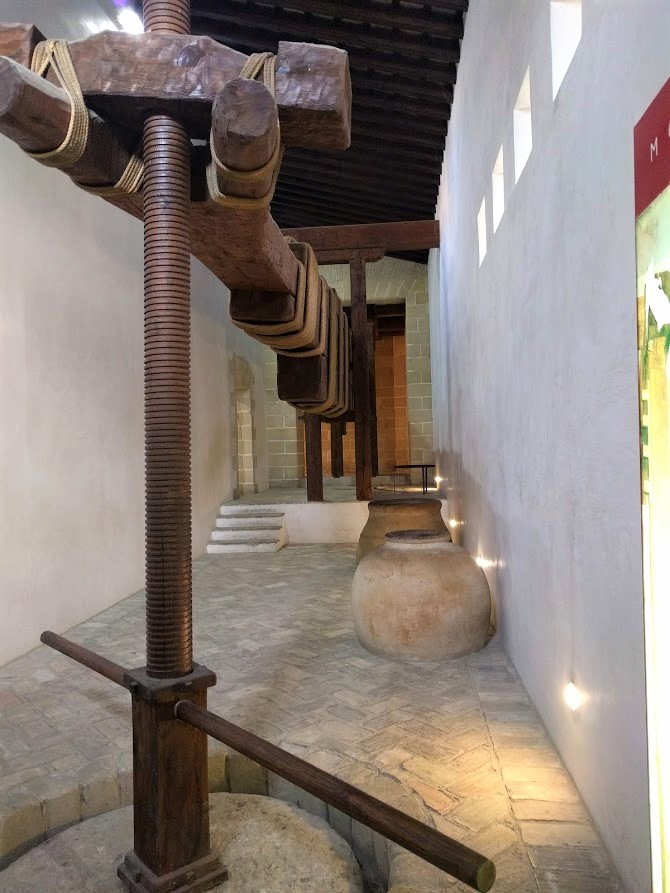 The “how it works” was one of the most confusing things we’ve ever read.

The beam sits on the stone quintal with a central support and a counterweight support. The head of the beam is lowered and wedged, then the dowel is removed, the quintal is raised with the help of the spindle. This makes the screw turn, which smooshes olives. The olives have been completely squished when the quintal reaches the ground.

I think this translates to a freaking big see-saw that goes up: then down.

The simple version involved lashing a donkey to a pole attached to a conical mill stone. A version of this is probably what we saw in El Cortijo del Alamillo (6th picture down).

These cones are all over everything here – they are more of a symbol of olive oil than actual olives. We should be thankful the mecha-seesaw isn’t.

Visit to a Bodega

Jerez is ground zero for sherry making, and going there without visiting a bodega would be like going to Kentucky without visiting a bourbon distillery. Most of the bodegas have set-times you can visit, and unfortunately these times correspond with each other. Almost every bodega has the same set hours: 10, 11, 12:30, 1, 2, 3. The tours take over an hour. If you want to see more than one you can, at best, see two a day. There are loads: Sandeman, William & Humbert, Diez Merito, Tio Pepe, Fundador, Lustau, Tradicion, Faustino Gonzalez, I could go on. You could probably stay in Jerez for a week and just see nothing but bodegas.

We picked Diez Merito based on someone online saying you got to taste more samples for the same price as other bodegas. More sherry for the same money – we’re in.

We were the first people to arrive so we got to pick the language – English. After reading the olive-oil seesaw I was done trying to comprehend Spanish. Another couple arrived who spoke French (and Spanish and English) and it was a jolly mess of the guide not knowing the word for “hole,” the French couple not knowing how to say “barrel” in English but knowing it in Spanish, no one knowing the word “ferment” in any language. The process uses American White Oak barrels -like everyone else does to make whiskey, bourbon and Tabasco sauce. We were the only people who knew why (sweet wood).  Thanks bourbon trail!

We also irritated them immensely by asking about the “Palomino” grape variety. Where we’re from “Palomino” is a type of horse. Google “Palomino” and you’ll get nothing but horse pictures. They assured us “palomino” had never been, and never would ever mean horse. Only grapes.

We didn’t really learn that much – between language barriers and “I don’t know why it’s white oak” “The Palomino grape, NOT HORSE is less sweet.” We kinda just looked. The big thing we learned was they use the same soil as bullfighting rings (see picture above, it is the same color).

At the end, though, we got to taste almost every kind as many times as we wanted. The ones in this picture were actually the same exact ones we got to try. After our 6th or so Dixie cup of sherry we were all having a great time, language barrier and all. 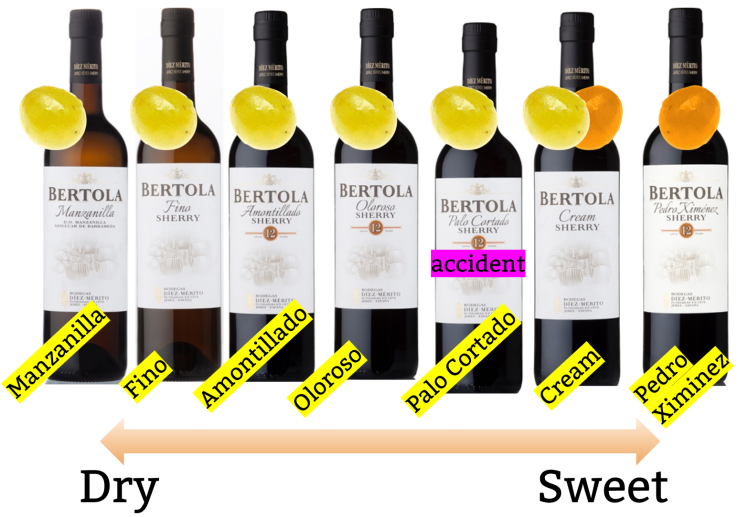 Manzanilla was like white wine, while Pedro XIminez was grossly sweet.

We could’ve bought a couple of these liters of labeled-glass bottles for $11 but we went to their warehouse across the street and bought 4 liters in unmarked plastic bottles (that sounds so nefarious) for $11. They filled it up right in front of us. 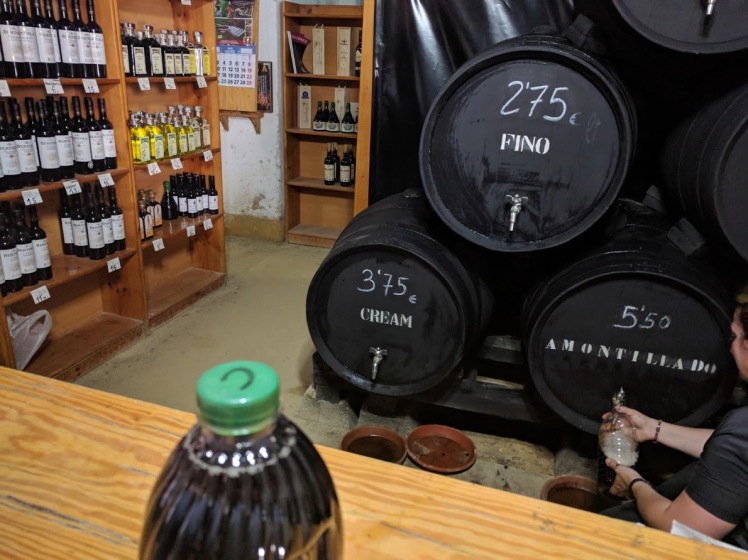 We’ll have these for forever. 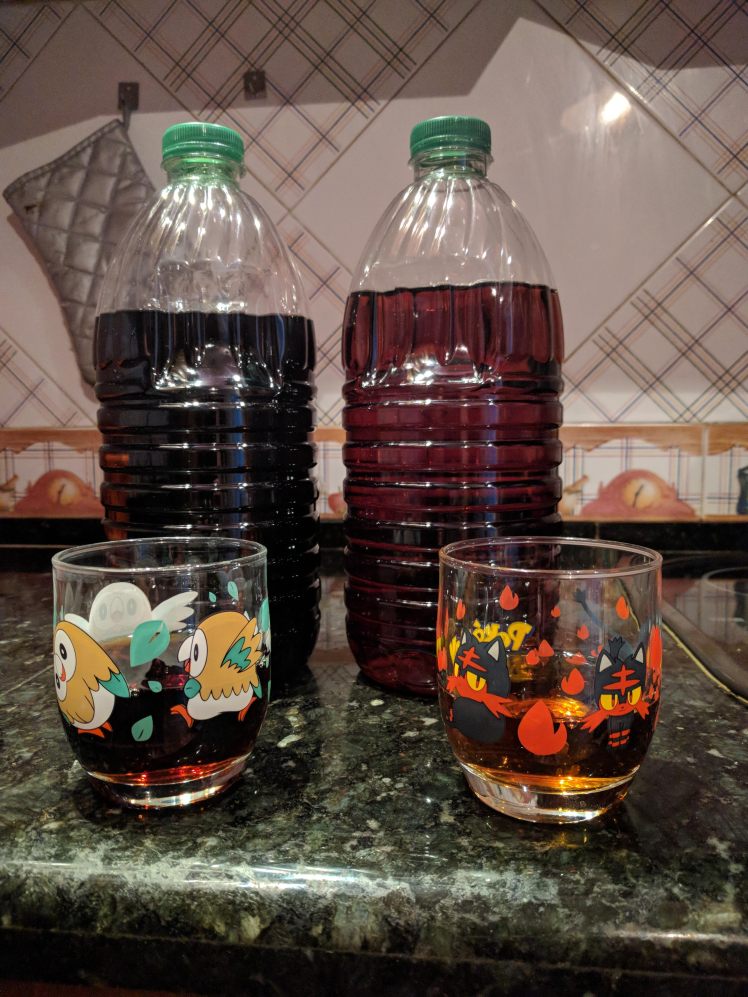 We took what we learned from the Bodega (which wasn’t much) and researched some more so we could write this post about sherry, which is here.

We cooked our favorite travel dish (something we invented, in fact). Mushroom Steak Cream Sherry Pasta Cooking Cream with black pepper (needs a better name). Why is it our go-to travel dish? Because sherry is easy to find and nice to have in your hotel, and you only need cooking cream, steak, mushrooms and pasta (things almost any corner store will have). Most apartment hotels already have oil (some even have pasta) and pepper. We spent this night listening to our neighbors playing flamenco music while we ate our sherry dish (the music got old fast).

The next day we went to Cadiz which we’ll save for another post. On our last full day we explored Jerez a little more. Besides the Alcazar and Sherry Bodegas there isn’t too much else to see. We went to the Archaeology Museum which was neat. Then we went to a horse show.

The Moors imported fancy horse techniques when they invaded Spain, and ever since then horsemanship has been taken very seriously in Spain. Today, it’s common to go to horse schools in Andalusia and watch horses dance, spin, jump straight in to the air, choreograph and cross their legs whilst hopping. I’m sure there are very technical terms for this.

The school we went to was maybe the school in all of Spain to visit. It’s called the Fundacion Real Escuela Andaluza del Arte Ecuestre, or the Royal Andalusian School Foundation of the Equestrian Art. Photography wasn’t allowed so we have no photos. We were also late which is something we’ve never done before. We’re very careful, organized travelers but we looked at the wrong time and actually arrived 15 minutes late.

We were actually glad. To be honest. It was interesting but not incredible. I mean obviously it’s incredible what the horses have learned to do over years and years of hard work. But it’s a lot of downtime between truly amazing things and there’s a lot of whipping and spur use. I think about training a dog and how they only want to please. Horses are huge, autistic cats who are oftentimes scared of nothing. Of course you have to use a carrot and a stick to get them to dance or jump. Though I would’ve paid a million dollars and camped there if it had been dogs dancing, choreographing and jumping straight in to the air – just saying.

If you want to see some of the show someone broke the rules and filmed – so here’s a youtube video (the music will haunt your dreams) starting with one jumping in the air. Again, we’re not saying it’s boring or stupid, but it’s something that probably was not forth 24 euros per person.

And, since we couldn’t take pictures or videos of the horses, we consoled ourselves with a picture of the grounds.