We just got back from a road trip! A road trip that would span over only Andalucia, and mostly just through Jaen. We’ve mentioned that we’ve been worried about missing things. We’re about to move to a completely different part of Spain (physically and culturally) and want to make sure we see the good ol’ south before we go. Who knows how long, if ever, until we’re back here again. So we made a list of all the weird things you can’t get to by bus or train. Then we rented a car and did it.

It wasn’t easy – we spent over 40 hours planning it out because we’ve never done this before. The list of want-to-see had to be whittled down to must-see things. Things had to be booked ahead because they were not touristy places – like we actually had to call people and say “can I come at X time?” Because of August closures things were complicated further. Then sacrifices had to be made – you can see a Roman cistern or a cheese factory. And on top of it all, we did the entire thing in Spanish.

Do one thing each day that scares you

I was terrified to drive in a foreign country because it’s so cultural. We walk around everywhere and see people doing crazy things in their cars. We also see all the road signs- what does that sign mean?

Why are buses and some people “allowed” to drive wrong-way on a one way street? Where do you park in a medieval city? What does a flashing yellow/red combo mean on a stop light?

Half the streets are from medieval times and are so tight you could almost touch both sides with you hands –  you’re expected to fit a car down that? 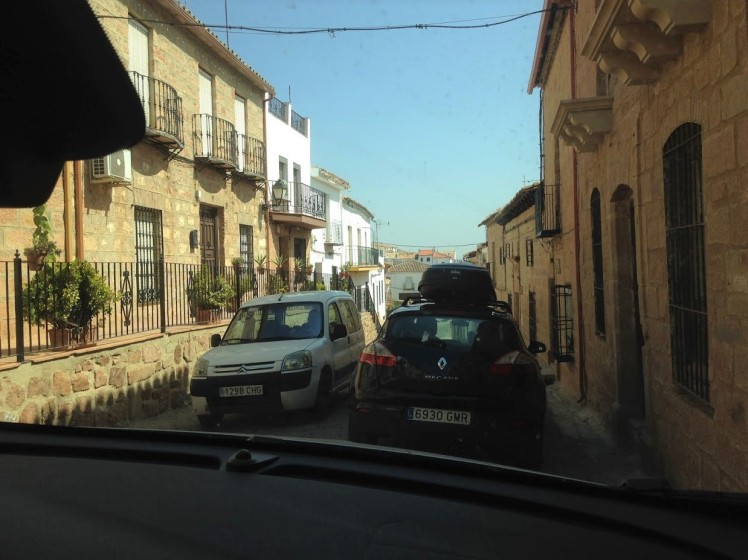 I didn’t really want to do a road trip because I thought it would probably kill us all. But I’m obviously not blogging from beyond the grave. Everything turned out fine. Obviously.

Whenever we go to Jaen nothing works – everyone is out sick, things are closed, or people shout at us. So we were figuring now that we had 4 non-refundable hotels waiting for us, the car rental guy would probably deny us our car.

We had booked it online before even arriving. We had done tons of research on the road signs and rules. We had brought all of our paperwork. We were ready.

Two interesting things about driving in Spain is that it is mandatory to keep a high-visibility vest in your car in case you break down. And it’s mandatory to keep a spare set of glasses in the car if you wear corrective lenses. We were lucky we had just gotten Chris a second pair because we didn’t even have a second pair before then. The rental cars have a high-vis vest already in them. We didn’t have to buy one special for the trip.

To even start our road trip we had to take the bus to Jaen then walk down to the train station. We were really keeping our fingers crossed everything would work out.

The guy ended up being really nice. He asked us for our passport, address, phone number and international drivers licence. We didn’t end up needing the 30 photocopies of past licences, health records and vision prescription we had brought – we didn’t want to give them any excuses to not rent us a car.

He didn’t speak any English which was cool. This kicked off the whole trip of speaking only Spanish. The only time we got confused was with the insurance – it sounded like €30 more but ended up being €130 more. Worth it (minor foreshadowing).

He really pushed an automatic car – the only automatic on the lot. I think he asked 3 times if we weren’t sure we wanted the automatic – “are you sure… I mean, you are American.” I’m not sure if he just needed someone to drive it around so it didn’t die from under-use or if he knew it was a good idea. After the third time asking we said yeah fine, give us the automatic. It also didn’t cost us anything extra, which it usually does from what we hear. And we are glad we did, some of this driving would’ve been nightmarish.

Hell no – hooray for automatics!

We’ll divide it into 5 parts: