But losing your buried treasure – probably the epitome of disappointment. No joke, the guy who buried all his treasure never came back for it. Disappointing. And that’s what this hike was: disappointing.

Our “adventure” took us to the neighboring village of Torredonjimeno with the intent to learn about a famous horde of treasure that was discovered nearby. We last mentioned this village in our post about Three Medieval Martos Things, specifically in the part about our hike to the abandoned salt mine, but we’ve never talked about the village itself (except for that one time we walked all the way there only to find the entire village closed for siesta). 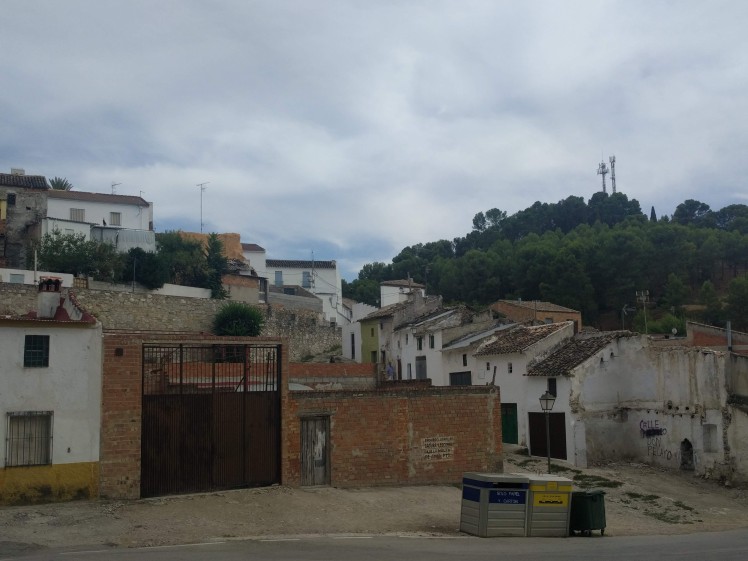 The main attraction in Torredonjimeno would be its castle, but people tore most of it down to make space for a church a long time ago. Just by looking at the village you would never know that it actually has a pretty cool history. For those lucky enough to get inside what’s left of the castle, the big ticket item is a museum dedicated to the treasure.

So, first on our itinerary was the village of Torredonjimeno itself.

We had timed our departure so that we would arrive in the village right when their castle was opening for visitors. But, typically, once we got there we were faced with a locked gate, and a paper saying that the castle was only open to visitors with a scheduled visit. So we snapped a picture of the gate, and of the inside of the castle through a small window in the gate.

We were unable to see the exhibit they have about the buried treasure, but luckily there is a ton of information about it online.

The Visigothic Treasure of Torredonjimeno

Let’s go back to the year 711AD. The reign of the Visigoths is about to come to an abrupt end thanks to the invasion of the Moors.

Many of the Visigoth kings didn’t realize they were being conquered until it was too late, and the ones who got out didn’t have a lot of time to pack. Many of them buried their treasure to keep it out of the hands of the enemy. This is probably what happened in Torredonjimeno 1,300 years ago. A king (whose name is lost to time) was fleeing across the land before the invaders. He stopped long enough to bury his treasure, probably promising one day to return and reclaim what was rightfully his. Well, sadly the war wouldn’t end for another 800 or so years, and his treasure was forgotten.

Fast forward to 1926. A simple olive farmer was digging holes in some field, probably to plant more trees. While doing this, he found a whole mess of gold and jewels. For some reason that I can’t understand, this guy thought it was a horde of useless junk. Maybe he couldn’t tell that he was handling gold and jewels because the pieces were covered in mud, I don’t know. In any case, he gave the things he found to his kids, who entertained themselves by breaking most of them. A junk collector eventually made his way out to the farmers house, and bought all the pieces the farmer had found. He eventually sold these pieces to a collector who then sold them to a museum.

Today these pieces of treasure are spread throughout various museums located in Cordoba, Seville, and Madrid (Including the National Archaeology Museum). The pieces in Torredonjimeno are replicas, but they have a good exhibit about the treasure and about the Visigoths (probably). But the story of who owned them, and exactly how and when they came to be buried in a random plot of land remains a mystery.

All anyone knows about them is that they are likely around 1,370 years old, and this is just by comparing their style with other pieces of Visigothic treasure found in other locations.

For those of you interested in seeing what the treasure looked like, here is a link to a gallery.

We set off for our second destination, the mill.

When we got to within seeing distance of the mill we were met with the sounds of at least a dozen barking dogs. It turns out that a local farmer has taken over the remains of the medieval mill, and built a bunch of kennels for his many dogs. He also had a tool shed with a garage nearby. So we walked on by, unable to explore the ruin because apparently it belongs to someone.

Apparently a group of friars built this mill back in the 1400s to supplement their income. It was not fortified like the Molino del Cubo, so it is much smaller and less preserved. There is not a lot here anyways, but it was more or less along the way so we had to see it! And it’s always fun to see something from the 1400s. 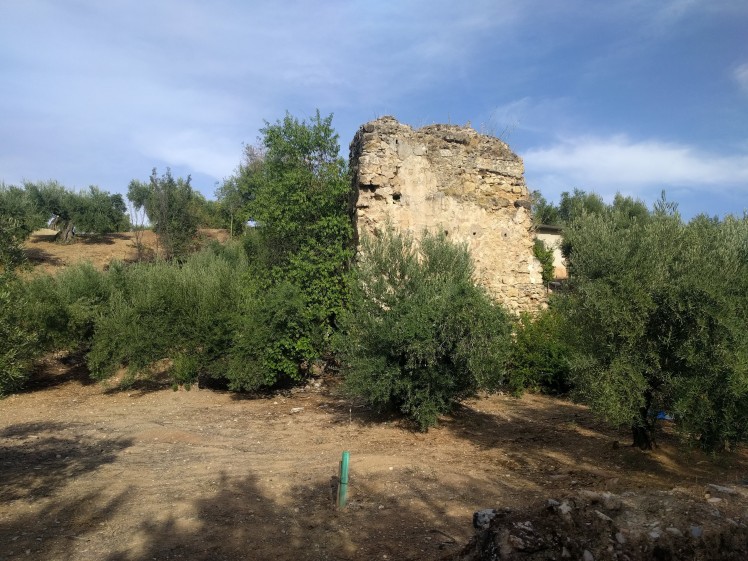 No matter! Two more or less failed destinations down, but we were still having fun. We walked through the sea of olives until we got near our third and final destination.

There really isn’t anything indicating the fact that there used to be buried treasure here. It’s just a field, with olive trees, no different than the millions of other fields with olive trees.

We had the coordinantes of the specific location, but chose not to go all the way there since we were getting a bit tired at this point. Instead we took a photo in the general direction of the treasure site, and kept walking home. 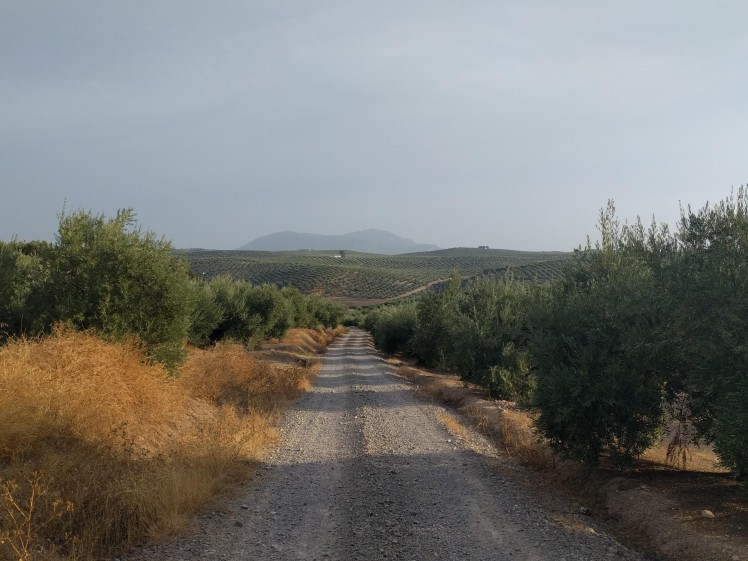 The road went up and down the valleys and ridges, at times we lost sight of La Peña (impressive since we were so close). And while there wasn’t anything interesting to see, I just happen to know about an interesting event that happened somewhere in these valleys.

The Battle of Martos

In the 1270s Martos was constantly under threat of attack, but the Moors had a shortage of fighters so things never got too serious. But then the Muslim kingdom of Granada was reinforced by a huge number of Moroccan soldiers. Moroccans and Grandams liked fighting each other just about as much as they liked fighting the Christians, so they were all quickly sent off to invade Christian Spain before they could kill each other. When the invaders arrived in Martos area, they found that all the knights and soldiers were in their castles doing what they usually did, waiting for backup.

Their back up should have been the king of Castile, but he was away fighting in some other region, so the task of helping Martos fell to the prince. Unfortunately the price died just because that’s how things were in medieval times. Command was passed down to the king’s second son, an archbishop named Sancho. When Sancho arrived in Torredonjimeno (near Martos) he learned that the location of the largest part of the Muslim army was unknown, but that there was a small group of raiders near the city. Not only were the raiders nearby, but they were laden down with loot and slaves. The knights of Calatrava (who dealt with this crap all the time) told him to sit tight, and wait until the main body of the Muslim army was discovered. Sancho, eager to defeat the heathens, insisted on attacking them, so he rushed out with all his knights and soldiers.

If you were thinking that this was an obvious trap, congratulations, you are smarter than Sancho. The rest of the Muslim army came out of hiding, surrounded the entire army, and killed just about every last person. Sancho was taken captive, but both the Moroccan and Granadan soldiers claimed him. Since Sancho was the son of the king, he was worth a lot of money. But the Granadans and Moroccans argued so much that their commander feared they would start fighting each other.

Imagine two children fighting over the last cookie. The most logical thing for a parent to do is to divide the cookie in half, right? Well unfortunately Sancho was the cookie. The commander decapitated Sancho, and gave the head to the Granadans and his hand (with all his official rings) to the Moroccans. Then they kissed and made up and went on with their invasion.

The exact location of the battle is not exactly known, probably because there were so few survivors on the Christian side. But since our hike went right through the approximate area where this occurred, it was easy for us to imagine how an entire army could be hiding just out of sight, especially back in the day when there was an actual forest here.

Well, that’s just about it. And given our schedule, the rains, and how busy we are, this might turn out to be our last hike in/around Martos! When we first learned that we were going to be placed here we never expected to find so many interesting things in the surrounding area. Even though we managed to see many wonderful things, there are tons more still out there. Let’s hope our next destination is even half as interesting! 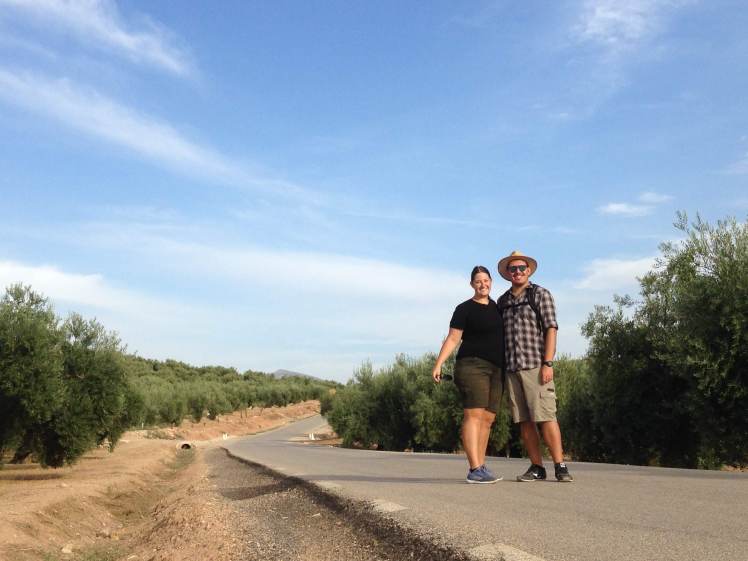 4 thoughts on “Hike: Treasure and Disappointment!”