I consider hand turkeys to be the one thing I can 100% say is American. People always say oh hamburgers or pizza but those are German and Italian. The saying goes “more American than apple pie” but apple pie actually comes from England. Baseball? Sure we did invent that one but it’s only America’s third favorite sport after football and basketball. Nope, hand turkeys and probably the electoral college make you feel like a red (white and blue) blooded American. Dammit if I’m not gonna trace my hand and make it look like my food this holiday.

So I always try to sneak hand turkeys into any class around this time. We had some amazing hand turkeys in Korea because the kids were older. In Martos we did it with real live paint which was a pretty big operation to have 30 6 year olds running around with paint-y hands. 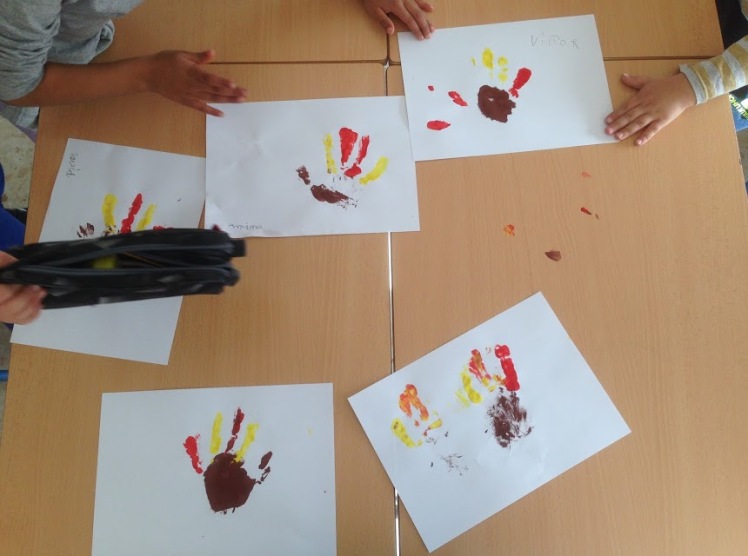 My 5th graders got really into it (for 10-11 year olds). It was dead silent as they all focused on tracing and drawing the beak and legs.

The 3rd graders couldn’t figure out where the beak goes. Because I’m left handed I trace my right hand as an example, but this doesn’t jive in their little heads. They see a beak on the left side when their right handed turkey would have a beak on the right. So there were some backwards pinky finger turkeys.

A rousing success for hand turkeys.

This year marks our third Thanksgiving in Europe and 6th abroad. Every year there are always interesting substitutions.

We made a little chart of the things we’ve been able to find in the past. Things change all the time so this doesn’t reflect the whole country (just our city in that year).

We always bring the sage from home. The big surprise was the whipped cream. When we lived in Germany they didn’t have canned whipped cream (they might now). Andalucia didn’t have marshmallows but Mallorca has tons of marshmallows in any size, shape or color (imported from Germany). So we actually could make sweet potato casserole this year.

Also the first year we were in Korea they had no cranberries so we used grape jelly (judge that how you will). Then they had bags of frozen cranberries and we whipped up sauce about once a week. In Germany we had it with red currant/Johannes berry. Last year in Spain we bought a bag of mixed berries, there were strawberries, blueberries, gooseberries, and blackberries. The gooseberries looked an awful lot like cranberries in the picture on the bag. We painstakingly separated the mixed bag and mixed up the “cranberry sauce” Nope. Cranberries have naturally occurring pectin so if you boil them right it will set up like the sauce we all know and love. Gooseberries do not. So we had basically soup/juice made of funky berries.

Pumpkin pie is unstoppable abroad but you can’t buy it in a can. I’ve so far never met a gourd that couldn’t be turned into pie. I’ve done acorn, butternut and kabocha (Asian pumpkin). We did cook the pie in a double boiler (the kind of pan you use to melt cheese or chocolate. But hey, it was a great size.

How we did/do Thanksgiving in Spain

You can buy a pack of 2 hunkin’ turkey legs from Mercadona. We roasted those for a couple hours under a pile of stuffing. You can buy small chickens and actually stuff them but if you want turkey the legs are your best bet. We can buy these legs year round in the freezer section so we’re happy (plus they’re only $3).

You can’t buy soup in cans in Europe so we have to mix our own mushroom soup “concentrate” and hope it’s not to wet.

They don’t have those nice french style green beans all sliced up. I guess I could hand slice my own but who is going to do that.

Stuffing is universal if you bring your own sage from home. Bake bread, saute veggies, re-hydrate bread. This year we bought a 99 cent box of livers and hearts so we could put the gross stuff in there for extra authenticity.

Haha! Almost a success. After all the failings of every other year we hacked the system.

Its cranberry juice and agar agar. Gelatin can fail in too much acid. Cranberry with orange zest is the definition of acid. Fortunately there is agar-agar which is a plant based gelatin. It sets up faster. We boiled the cranberry juice with zest to try to get some of the water out then chilled it with the agar agar in it. It sort of worked.

This is always an ordeal to peel and chop the pumpkin, steam it and mash it just to be able to follow an american recipe that calls for canned pumpkin. In Spain we can buy pre-chopped pumpkin for under 2 euros so that’s a good deal.

You can’t get evaporated milk so we evaporate our own. Then all the spices are easy (as pie) to get. Nuez Moscada, Pimienta (secret ingredient), Jengibre, and Canela. There isn’t usually brown sugar but we found a sugar in the raw that was dark and we think that worked out well.

This year was the first year abroad we made it successfully. In Korea it was just plain weird. We have the spices, we have the imported German marshmallows masquerading as American, why not?

Nah. We aren’t about that. I’m mostly just here for side dishes. I honestly wouldn’t even have any turkey if Chris didn’t want it.

Heck yes we had leftovers.

Our drink of choice both years has been Asturian apple cider “Sidra.” This really rounds out all the fall flavors.

With Thanksgiving over it is finally socially acceptable to put up our lights. We have our smallest tree yet at about 1 foot tall at best.

Last year’s tree and lights. The lights blinked and flashed and went nuts like a seizure inducing Christmas party rave whenever they’re on. Then they broke, which I guess is predictable. It’s like they got all of the light out of their system early.

This year is far more calm and happy.

Also if you’re wondering how we travel around the world and still manage to have ornaments – we mostly use key chains, phone charms, and small toys that we’ve found on our many adventures. Highlights include a sad egg in a hamburger (Japan), a dog tugging a bone (Japan), some soju (Korea), a pirate lion (Germany), and some Star Wars things out of Kinder Egg candies from Germany.

One thought on “Thanksgiving”