Before coming to Toledo we spent two nights in a place called Cercedilla, and three more in Madrid. And then after Toledo we went to a little place called Alcala de Henares to finish up our trip.

Cercedilla, Madrid and Alcala de Henares were all interesting in their own ways, but none of them really deserve their own posts. So I’ll summarize them here and devote most of the attention to Toledo.

Cercedilla is a little mountain town that is a popular weekend hiking/skiing destination for people from Madrid. It’s most people take a little train up into the mountains, hike around all day, and take the train back.

But the weather had other plans for us. It wasn’t a constant downpour, but just bad enough to convince us to call the hiking off.

“No problem!” we thought, “there’s at least two interesting things to do besides hiking!”.

Our first interesting activity was a walking path that followed an ancient Roman road, and according to our map there were tons of cool Roman road relics like mile markers and curbs and stuff. It probably would have been really neat, but we didn’t see a single thing. The walk only took about 20 minutes, not exactly a days worth of fun. So we went off to the second thing.

The Ski Museum. We were expecting it to be closed or something, given how the day had turned out so far. But no, it was open! The museum was free and talked about the history of skiing in general and in Spain specifically and also the evolution of ski technology. There was also a huge shrine to Paquito Ochoa, the first and only Spaniard to win a gold medal in the Winter Olympics (1972, Sapporo). 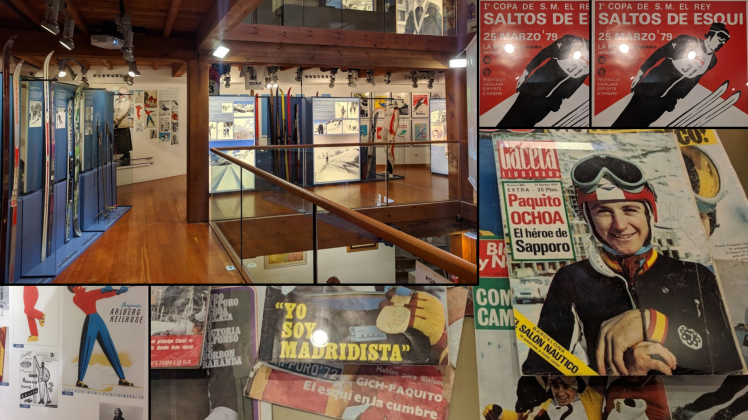 Shorty after the museum we were chased into our hostel by the rain, but we were happy to have the time so we could research cool things to do in Madrid.

Remember how we got stuck in madrid last year? We had something like 6 hours to kill, so we decided to go to one of the two huge art museums in the city. It was awesome, but we never really felt like we had seen the city.

So that’s what we did. We saw it. We went to three great museums, we went shopping, we ate LOTS of Mexican food (why not?). It was nice, but tedious. We are never 100% miserable in large cities, but we are much happier in the Avilas of the world than we are in the Madrids. The main problem is the sheer number of people. Any popular area to see in Madrid is crammed with tourists taking photos, locals commuting to work, and the small army of buskers lurking about trying to convince you to give them money. And they aren’t even good buskers, they just wear shitty furry costumes and menace you until you pay them for a photo.

Anyways… those museums though. We went to the Prado, the Museum of the Americas, and the National Archaeology Museum. Quick recap:

The Prado Museum is a massive royal art collection. The museum across the street (the Thyssen) is the private collection. And if you only have time for one museum, choose the Thyssen. It’s got a much more varied collection whereas the Prado has mainly religious pieces. However the Prado has Velasquez …. so tough call.

The Museum of the Americas has all of the artefacts that the Spanish brought back from the New World. We saw feathered cloaks, golden idols, weapons, statues and pottery from the Maya, Hawaiians, Aztec and even the Apache. Then there was an actual Mayan calendar, and two mummies from Peru. It was spectacular, and almost empty compared to the Prado.

The National Archaeology Museum is full of all of the best stone age, Roman, Visigoth, Moorish, and Christian artifacts dug up around Spain. It tells a really interesting story about the history of Spain, and contains some seriously cool things.

The thing we were most excited for was the Tesoro de Torredonjimeno. Torredonjimeno was the neighboring village to Martos, and we tried to hike to the area where the treasure was discovered, but failed.

We ended up staying here right up to closing time, and we unfortunately missed an entire floor.

Now on to Toledo!

This was the place Kaeti was most excited to take me, and it’s probably the place that defined the trip.

Toledo was the original Visigoth capital of the Spanish peninsula right up to the point when they were kicked out by the Moors in 725 CE. It stayed under Moorish control for about 360 years. This sucked for the Christians in Spain since Toledo was seen as the cultural/Christian capital of Spain. Whoever controlled Toledo controlled the spirit of Spain. So when it was finally recaptured by the Christians it marked a huge turning point in the reconquista.

Toledo being the spiritual center of Spain and witnessing so much history means that there are tons of cool things to see here, and we spent 4 nights here. So to make our stay as comfortable as possible, Kaeti had reserved a penthouse apartment for us.

This was probably the best hotel situation we’ve had while on vacation.

The people in town were also much nicer than they had been in Madrid. We were walking around the back streets looking for lunch when some local stopped us. He thought we were lost and looking for the main square, so he started giving us directions. We said thanks, but actually we want lunch. So he started telling us about his favorite restaurant just up the street, and about how awesome it was. He even recommended his favorite dishes. We really appreciated this, and it made us super happy that we know enough Spanish to have this kind of experience.

From the outside the restaurant looked like some dingy bar with only 2 tables. So we marched in trying to look like we knew what we were doing, and got directed to a large dining room in the back. Chris tried the dish the man had recommended to us, not even having a clue as to what it was. It turned out to be chopitos con garbanzos, AKA baby squid and garbanzo bean stew. It was super good, and I probably would not have tried it without that guys recommendation.

We spent most of our time just wandering around town, looking at all the cool things. We saw the ruins of a massive Roman circus (chariot racing track now used by people for jogging and bike riding), we had coffee at a Friends “Central Perk” themed cafe (with themed ice creams, and climbed the surrounding hills to get a view of the town.

The best view we had was from El Cerro del Bu, a tall hill just on the other side of the river. We had been trying to get to the main overlook, but we saw a dirt track leading up El Cerro, and we decided to go up there on a whim. At the top of El Cerro are the ruins of an old bronze age settlement. We sat on some rocks and watched the town for about an hour.

We also went to a cheese museum. It’s more of a place where you can buy fancy cheese and wine, but they also have some rooms that explain how Manchego cheese is made. And I’m pretty sure that this was the first time we tried Manchego cheese. Manchego is just sheep cheese made in the normal Spanish way, but it comes from La Mancha (hence the name “Manchego”). We paid a few euros for a wine and cheese tasting, which was fun. We walked out with a bottle of fancy wine (made from 100% graciano grape juice, which is apparently rare) and a hunk of fancy cheese. We combined all of this with some meat, bread, and fruit, and made our own basic charcuterie. And finally we visited the massive Alcazar de Toledo. Alcazars are usually medieval castles that were converted into palaces throughout the ages, and the Alcazar in Toledo takes the cake for “most over the top palace conversion”.

There had always been a castle on this spot, going way back to before the Romans. Sometime after the reconquista Spain became The Spanish Empire, and thanks to some wonky marriage contracts (incest!), the Spanish monarch found himself in charge of half of Europe, and also the New World. So to represent his god-like power, he had a massive new palace built literally right on top of the medieval castle in Toledo.

Recently they did some digging in the foundations of this palace, and uncovered relics and foundations from every culture that’s ever possessed Toledo. It’s all been excavated, and it’s the first thing you see when you come into the palace. 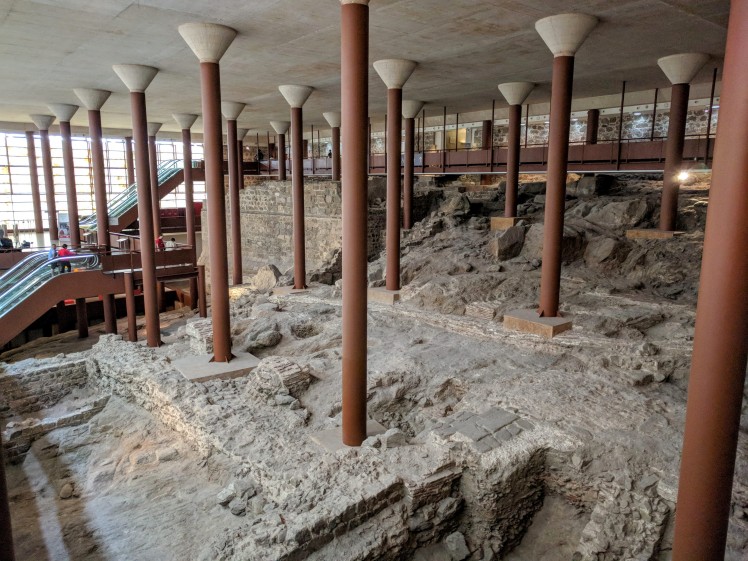 This is the part that has been excavated. The poles are supporting part of the palace and a huge patio. You can see the foundations of medieval towers, roman walls, moorish walls, buildings, etc.

The entire palace has been turned into the Museo del Ejército, or the Military Museum. In reality the museum works better as a museum of Spanish history, starting at the very beginning and going all the way up through the Spanish Civil War. It was so massive and informative, that we had to go back a second day just to finish it. Since I’ve already added so many pictures, I won’t here. Just picture walls of guns, armor, paintings, famous swords, and tons of information.

There are many other museums and things to see in Toledo, but the thing we enjoyed most was just being there. We cooked breakfast and dinner in our apartment every day, and ate on the balcony. And during the days we would get lost in the historical city center, or walk around the city on the river path.

It was super busy at times, so it was not the most relaxing of stops. But that’s why we had the penthouse.

Our next and final stop Alcala de Henares

This little town sits just outside of Madrid, and was the final place on our circuit around Madrid. Kaeti chose this place because it is geographically close to the airport, which would be easy to get to on our final day.

The town is also kind of quirky, and has two fun things to see.

The childhood home of Cervantes, the author of Don Quixote. And the ruins of a Roman city.

Cervantes house is really pretty, and serves as a cool example of what houses looked like in the 1500s. There isn’t much about Cervantes or Don Quixote here though, just the awesome house.

And the Roman city is great, but most of it has yet to be excavated. But if you go there you can see the foundations of middle class homes (which were almost the same style as the house Cervantes lived in 1,200 years later), an upper class estate, a market square, Roman baths, and the sewer system.

We enjoyed Alcala, but were sad and stressed to end our vacation. It had been awesome, and we only had 3 days of freedom before starting up the new year of school.

One thought on “Toledo (and some other places)”