We left Ljubljana fairly early in the morning. We walked by the American and Russian embassies which are right next to each other. A fun fact is that this phenomenon doesn’t happen anywhere else on earth – for some reason they’re neighbors in Ljubljana but everywhere else they don’t like to be that close to one another.

We power walked (as usual, we’ve started keeping to Spanish time and that means leaving late) to the train station. Turns out our train was 16 minutes late. It was nearly -3°C (26°F) and we all just had to stand around on the platform waiting for the train. It was nice to think about all the times we’ve nearly had heat exhaustion in Andalusia as we huddled together in the wind.

We were headed to Lesce, Slovenia: Population of 2,000 and elevation of 1,600ft (487 meters). It was the perfect location to balance all the things we wanted to see, a ski museum, Lake Bled, and some castle ruins. You can see our journey in lime-green below.

We arrived and were immediately surrounded by snowy mountains. Oh we had missed this.

We walked all of two minutes across town to our hostel. The only place to stay in the whole village was this hostel. It had the usual shared kitchen and bathrooms, but we had a private room with a sink. This brought back amazing memories of us backpacking around Europe in 2011.

It was only 10 am and we had hundreds of things we wanted to do with only 2 days to do them. So we headed to Lake Bled, probably the most famous thing in Slovenia. We had a nice walk of about 5.9km/3 miles along a bike path. Slovenia’s flag has the Triglav mountains over a river as their national crest, and at times if felt we were looking at an embodiment of the crest/flag while looking over the Triglav mountains and the river. 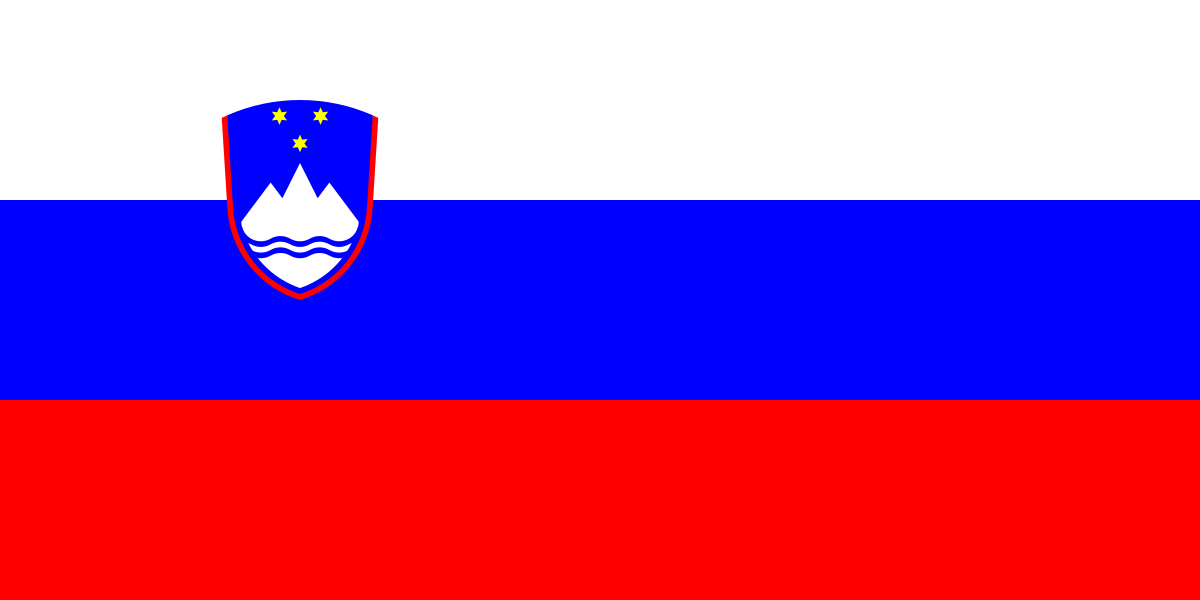 Slovenia’s rivers are all an ethereal ice-blue that we’ve never seen in nature before. And the houses in the villages are exactly what Alpine houses should look like.

So we took well over an hour getting to Lake Bled because we couldn’t stop taking photos.

Lake Bled had a Christmas market but the prices were gouged crazy high. As we said this is a super big tourist destination. So it was the first time we really had a problem with crowds or price gouging. Interestingly the Italian border is only 45 minutes away and the Austrian border is only 21 minutes away. So we were with more European day trippers than Slovenians. Well, them and the huge Asian tourist bus groups. We saw and heard loads of Korean, the last time this happened was in Granada. We try to stay away from huge destinations so little old Lake Bled having bus after bus surprised us.

Walking around the lake turned out to be a little stressful. There were huge tour groups walking slowly and all the day trippers had their dogs and were taking a billion selfies. All in all it was gorgeous and everyone wanted a piece of the good views. 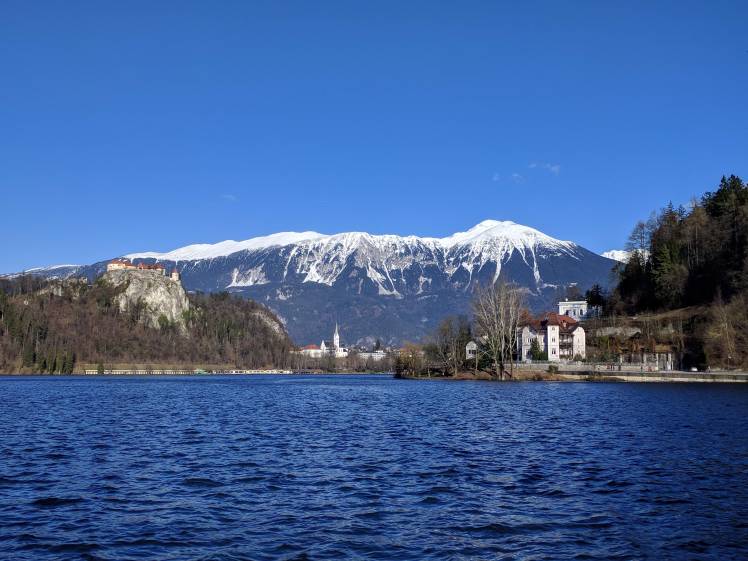 We walked about halfway around but wanted to get out of the rat race. So we hiked 700 feet nearly straight up to Mala Osojnica, a famous view point looking over the lake. When you’re on the ground it’s hard to tell that there is an island in the lake but looking down you can get a feel for how large the lake is and how gorgeous the surrounding mountains and villages are.

The only problem is some erosion and insanely steep stairs that make the final approach. The tourists who dared hike it were mostly in heels and sneakers, and were power walking because of the cold or maybe to keep to their tour bus schedule. Turns out earlier this year someone plummeted down and had to be medevaced. Between the ill prepared tourists and the steep climb, this doesn’t surprise us at all. Anyone thinking of hiking this better bring some suitable footwear.

The views were crazy good and there weren’t many people so you could take your time and just look at it.

We don’t usually post panoramas but you can click on this picture to make it bigger and zoom in on the landscape.

Afterward we headed to a coffee shop to warm up. We didn’t taste the world famous Bled cake there but did get a piece from a supermarket for way cheaper. If anyone ever wonders how we travel so much this is the kind of budgeting we do, we don’t buy cake and coffee from a coffee shop with a view. We’d just had a lovely view, better than 90% of the people walking around the lake. There’s no need to pay 6 euros for a piece when you can get 2 pieces for 3.50 at the grocery store. I’m sure some people think of that as an experience but we enjoyed the experience of getting lost in the back roads looking for a quiet coffee shop. To each their own, not shaming anyone who enjoys what they want. We personally don’t enjoy it and we can justify skipping it to save some euros.

When the day was all said and done we had walked a little over 17 miles (27km). It didn’t feel like it at all so we kept to our plan to hike even more the next day.

It was a super quiet Sunday morning in the village. We didn’t see a single car which worked out because there weren’t any sidewalks. We walked on the side of the road for a couple miles to the Elan Ski Museum. I remember, as a child, looking at everyone’s skis on the lift and asking my dad about them. “Where are Volkls from?” “From Germany” “And Rossignol?” “Uhhh France?” “And Elan?” “Italy? Maybe France?”

Nope. Elan skis are Slovenian. And they’re not subtle about it, either. They have a ski that has the entire “Death Dance” a very famous fresco painting in Slovenia. Some of their best skis are named after regions in Slovenia including skis named “Triglav” after the highest mountains (and the mountains on the crest/flag). But I’m getting ahead of myself. Begunje na Gorenjskem has a population of a whopping 1,014 people. It is home to not only the Elan Museum but also the factory. We got excited as we approached because there were high covered fences and fiberglass everywhere. It felt a little like a Willy Wonka moment – what mysteries are behind this fence and in that building? I don’t know how skis are made.

The museum was fascinating. Turns out Elan makes (or made) everything: gliders, sleds, stages, halfpipes, stadium seating, playground equipment, gym equipment, tennis rackets, full on yachts, etc. They had children’s play equipment to play on but more fun was a ski simulator where you had to slide back and forth with a slalom course on the TV.

Besides having fun we also learned a lot. Elan invented shaped skis so that was interesting to see, they also basically invented screen printing for skis. So the museum was not only about the historical progression of skis it was also a bit of an art museum (hence the famous fresco being on the skis). 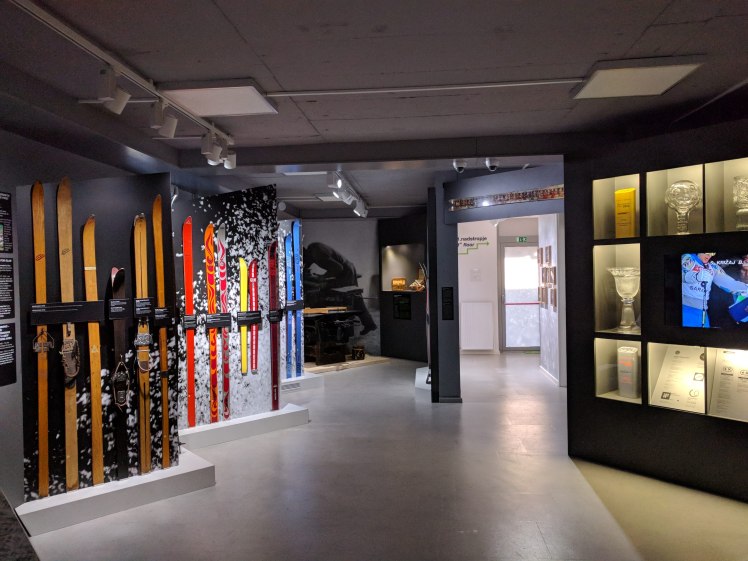 They also recently invented fold-able skis (in the top picture in the far right). This sounds like a great idea for small cars, garages or just to throw in your backpack. They teamed up with Porsche to create skis that have the bindings in them. So a seamless ski that has adjustable bindings already on the ski itself.

Did we learn how skis are made? No, we saw a nice cross section that explained the layers of the ski which did explain a lot. Elan skis still have wood inside of them (all skis do?). But admittedly we were more distracted by some wicked good ski jumping skis that had a deadly medieval point on the tip of them. Banned after just 1 year, Elan’s many inventions include accidentally inventing a lethal ski.

We had the entire museum to ourselves which meant we could try the ski simulator over and over. We haven’t skied in over 6 years so it was great fun to not have to rent equipment and bundle up but still feel like we were skiing.

We spent a few hours there but hadn’t had eaten yet so we went in search of breakfast. Turns out tiny villages don’t have many breakfast spots. Geese crossed the nearly empty roads, but other than that we were nearly alone. We wanted to see the Museum of Hostages – an old palace in the area was turned into a Nazi Prison. People were tortured and imprisoned there. It wasn’t open but we did see a few moments later to some mass executions that had happened in the woods nearby.  161 prisoners were shot in 1941 and 1942 (from the nearby prison). Interestingly they covered the monuments with plastic protection to stop the wood from rotting in the winter.

We kept walking up to Grad Kamen. This is a famous castle in the area from 1145. It peaked in the 1460s and started falling into disrepair until the 50s. They’re still working on it a lot, I imagine in 20 years you’ll have to pay an entry fee to go in and look around. For now it’s mostly ruins. The most dangerous places are blocked off (unlike Spain where you can just go in wherever you want).

We headed up the valley to Gostišče Draga, a restaurant for hikers. It’s only 20 minutes from the Austrian border so it was filled with mostly Austrians and some local hikers. We shared a table with another couple and enjoyed some really good food. 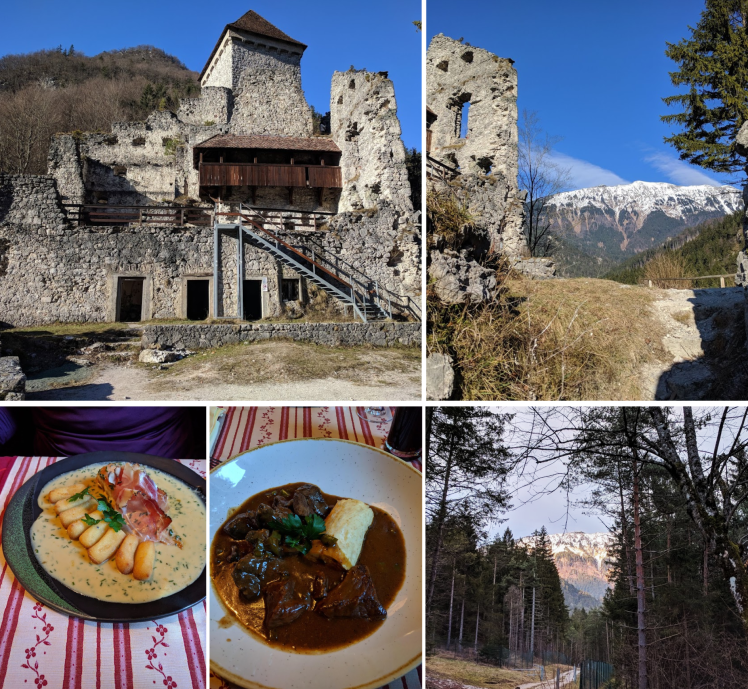 There is nothing better than coming in from -7°C (18°F) degree weather (with windchill) and having a hot meal, especially when you never managed to find breakfast. Chris got Paprikaš (“goulash”) made from wild boar and I got chicken with prosciutto in a chive sauce with croquettes. The music was just traditional oompah music (you know the kind with an accordion and a tuba).

We walked back as the sun was setting. We passed under the Devil’s Castle, a medieval fortification built high up on an inaccessible cliff (Anasazi style), and many more small Bronze and Iron Age archaeological sites on the way back down. We arrived long after dark and used our headlamp to walk along the road. Sure it was only 5:45 but it was pitch black in the mountains.

2 thoughts on “Lesce and Lake Bled”