Since arriving in Spain, everywhere we go we see traces of “The Reconquista”.

And every time we have a question about something specific, the answer usually lies in “The Reconquista”.

Why are there so many castles?

Whats with the architecture?

Why are there so many Spanish words that start with “Al”

The answer to all of the above questions is essentially “Because of The Reconquista.”

Pretty interesting, especially since we never really learned about it in school.

So, as something different, we will lay out the super basic explanation about “The Reconquista”, what it was, and why it’s important. 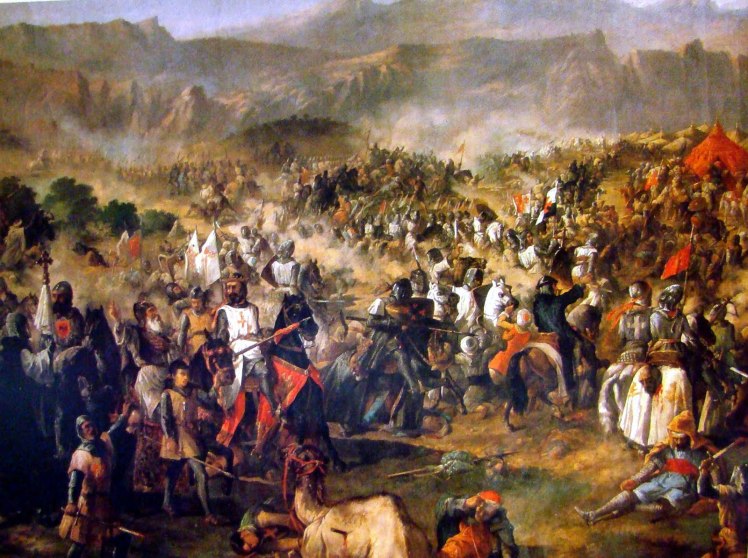 First, the most basic bits.

The Reconquista was a time of war that lasted just about 800 years between the Christian kings of northern Spain and sometimes France and Italy, and the Moorish (North African) Islamic kingdoms. The war probably started in 718 and ended the same year Columbus sailed to the new world (1492).

800 years is a very VERY long time. I just thought about it, and less time has passed between the war’s end and today (525 years), than between the start and the end of the war itself.

So, without too much detail, what actually happened?

In 711, North Africans invaded and took most of Iberia (that’s Spain!) from some small fry Christian kingdoms. Then they got a bit greedy, and invaded France which sparked an 800 year long shit show that went something like this. Two “sides”, with each side spending most of their time arguing about who should be in charge of their side. Then, when one side decides which “faction” should lead them against the enemy, they start some trouble, only for it all to fall apart for any reason you can think of, thus starting the process over again. Sometimes the Muslims and Christians are both busy fighting EACH OTHER. Sometimes everyone is dying of the plague.

Back and forth this rocks, until around 1340. The Islamic forces had been pushed pretty far south, and they attempted one last invasion of the now Christian north. They failed, and retreated back to their last remaining region, Al-Andaluz, in the far south of Spain. If that sounds like Andalucia, where we live currently, that’s because it’s the same word.

Three powerful Christian kingdoms have evolved at this point, Portugal, Castile, and Aragon. They spend the next 100 or more years making the parts of Spain they had already reconquered as Catholic as possible.

This is when the Spanish Inquisition gets going, the Jews get kicked out/murdered, and all the Islamic people who stayed behind get…you guessed it, kicked out/murdered. Or I guess tons were force converted to Christianity, but they were always treated with suspicion/and/or scapegoated for every small thing that went wrong, which usually led to them being kicked out/murdered.

When Spain (excluding Al-Andaluz) was suitably Catholic, Castile and Aragon joined their kingdoms together with a royal wedding. Portugal got folded into the new super alliance and was then ignored for 200 years.

The new super kingdom invades Al-Andaluz, and finished the Reconquista by taking the city of Granada, which had been the seat of Islamic power in Spain up til then.

The Spanish crown, probably bored with the idea of not waging war on a different culture, celebrates by sanctioning Christopher Columbus’ voyage  to the new world that same year.

All this fighting, spread over a vast period of time, left a huge impression on the landscape. The province we live in was on the front line between the Christian and Islamic kingdoms for about 150 years. Today, it has the densest castle population of any province or region in all of Europe. Just about every single village has a castle, be it a ruined castle or a state funded restoration castle. We can see two from our balcony, we can walk one village over and see another, and if we hop on the bus we will see 3 or more in less than 30 minutes. The castles built in our area aren’t the most picturesque in the world, they were built quickly and abandoned as the fighting moved further and further south. The real pretty castles are the ones that sat behind the front lines for hundreds of years.

And why do we care today?

The kings might have been fighting each other, but Christians and Muslims seem to have been living together just fine, sharing food, language, architecture etc.
In fact, during Islamic rule the people and the general culture flourished. Jews and Christians were at least tolerated by the Islamic kings, science and philosophy spread. And, most enduring, many of the most famous architectural landmarks in Spain were built during this time.

Also super relevant, today, something like 8% of the Spanish language is directly based off of Arabic. Here’s a fun fact, Al- is Arabic for “the” (generally speaking). So when the Spanish adopted Arabic words, they usually just kept the “Al”.

And on and on.

Besides the Al- words, tons of common Spanish words are Arabic as well,

We haven’t really talked about what Spanish cuisine consists of, mostly because the answer is very complicated. There is no real defining “thing” about Spanish food. The best description I can think of at this moment?…. Mediterranean (meaning olives, olive oils, cheese etc) with ham and potatoes. And apparently a lot of it was introduced directly or indirectly, by the Moors. Arabic scholars invented an advanced still, which was used to make the first Brandy in Spain. Almonds and most spices, vinegar preservation (pickles and onions yum), marzipan etc were all originally brought from the middle east at this time.

Well there it is, 800 years of history and cross cultural analysis  rolled up into one blog post.

Has this been generalized? Yes, but we really want to explain Spain, and the region were we live, so this should help give all of you some context for how complicated Spain is.