We were attracted to Tarifa because of its proximity to Morocco, 2 natural parks, roman ruins and sand dunes. We were mostly looking to hike around the latter 3 and if we were feeling adventurous, take a day trip to Morocco. We were also attracted to its down to earth surfer vibe. It’s full of surfers, windsurfers and kite boarders. It’s actually the windsurfing and kite boarding capital of Europe (maybe even the world). So while they’re down to earth people, the fact that it’s all wind sports tells us something about the climate. When we told our coteachers we were going to Tarifa they all responded the same way: “It’s very windy there. Be careful.” The average wind speed in Tarifa is  around 14 miles per hour. In December there are never days under 3 mph but most days around around 7mph topping out at 17 mph.

Also the average temperature while we were there was 53 degrees. So it’s was not chilly but it wasn’t a toasty place to lay on the beach. We were wearing jackets the whole time both for the weather and the intense wind. 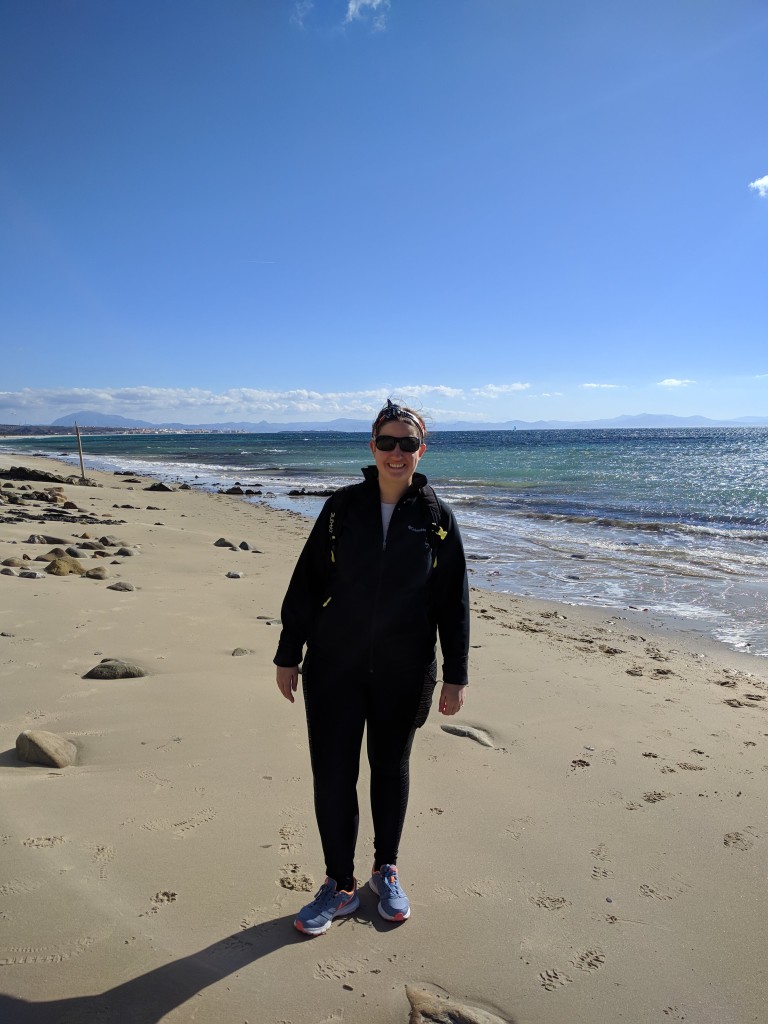 To get to Tarifa from Martos we had to

So it should be clear to everyone reading that Spain is nothing like our time in Germany. We can’t just hop on a bus or train and be at any village no matter how small. Spain is like the US in that it’s a car based culture. Cars aren’t just cool, they are full on “necessary” here. So it drives the need for buses down. Also like the US some, er, colorful people take the bus. So it feels sad, the way American public transportation feels sad. Fortunately the train is expensive so the strange creepy people can’t afford it and it’s much cleaner and nicer.

If we had driven from Martos to Tarifa it would’ve taken 3 hours 32 minutes. Rather than the 6 hours of travel (8 including all the waiting around). So like Almeria, the travel was pretty lame.

What wasn’t lame was everything after we arrived. We had this great vacation rental for mad cheap because it’s the off-season.

We spent our first day hiking the Colada de la Costa trail. This is part of the El Estrecho National Park.

This trail would be, in theory, 11 miles round trip (from Tarifa Castle to Guadalmesi Tower). We spent only a few miles hiking around because we were in total awe of everything around us.

For one, Tarifa is at the very bottom of Europe (it’s the southernmost point, in fact). So we spent the whole time in awe that we were standing in one continent looking at another. Those mountains, that land mass over there. Yup, that’s Africa. It’s strange being so close. Close enough that you could swim it if you were crazy and strong enough.

The second thing that had us slowing down was all the bunkers and abandoned houses on the coast. This is a strategic place to look out for, well, everybody. When Spain was fighting the Moors this would’ve been a good place to look out. During any wars this is a good place to watch to see who’s moving ships around. This is where the Mediterranean and Atlantic meet. So there are loads and loads of bunkers and military installations to look at.

We also weren’t exactly sure where the trail starts so we walked around the shoreline for a little while which was slow going but interesting.

We found wells, old homes, hidden military garages, and of course bunkers. Along the shore we found abandoned boats and of course all kinds of interesting trash. We made it a game to see who could find something with Arabic on it first – given that trash can easily wash here from Africa it doesn’t take too long to find a milk carton or water bottle with Arabic.

Interesting things aside, we took it slow because it was so pretty.

And we were walking into 14 mile per hour winds. Of course the journey back was much faster.

Day 2: Adventures in the Castle

The Tarifa Castle is also called the Castle of Guzman the Bueno (Guzman the Good or Righteous). Guzman the Good got his “the good” title for murdering his son. Er, for acting as accessory to murder of his son. So he’s a super hero for this and it’s a MAJOR part of Spanish stories (and propaganda of the past).

The Arabs were trying to take the Tarifa castle with a seige (the castle has been under siege a lot and has changed hands between the two forces a lot). So the Moors/Arabs/Maranids/Berbers captured Guzman’s son. The story goes they have his son at the bottom of the castle and are like “hey, we’ve got your son here and we’re gonna kill him if you don’t give us our castle back.” And Guzman was like “Well then here’s a knife.” And threw his knife over the edge to help the Moors/Arabs/Etc out. So they killed his son and everyone was like “omg I love you Guzman, you’re so good and righteous for sacrificing your son to keep this castle under Christian control. Yay.” And so they made him “the good” and made as much art depicting the dagger incident as they could.

So welcome to Tarifa/Guzman Castle.

It’s a really neat place that has a great bit of history (obviously, with it changing hands so much). The Arabs/Moors/Berbers built it originally ( in the 10th century). They had a mosque and some nice baths built. Then the Christians captured it and figured none of this will do. So they put a church over the mosque and wrecked the baths because bathing is probably spreading disease (their logic). Then the Moors/Arabs/Whomever got it back and they would add a bit of walls or a tower here or there. Then the Christians got it back and they built a big inner bit for better siege-ing and comfort.

In fact here is a picture showing how many changes and repairs were done over the centuries. 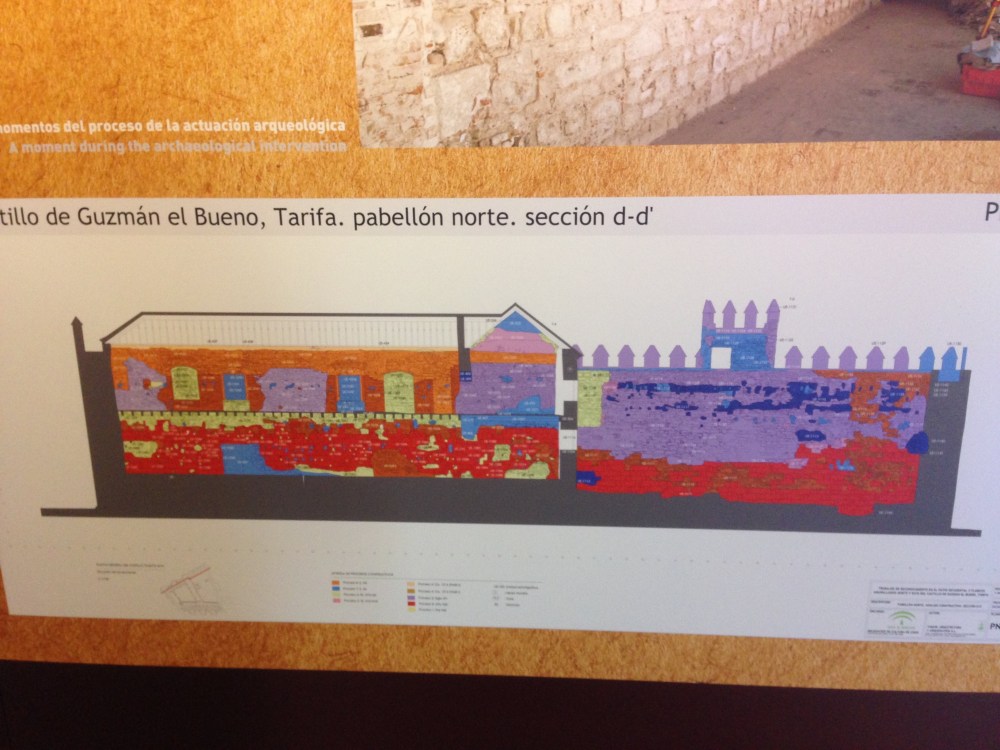 This big inner bit the Christians built is now a really great museum. They chronicled everything, the history of the Pillars of Hercules and the Straight of Gibraltar; the history of the castle and area; and even the history of medieval times. There were trebuchets to see and armor to touch. Very cool.

You could take this great photo there, too. Note Guzman and his knife in the background. 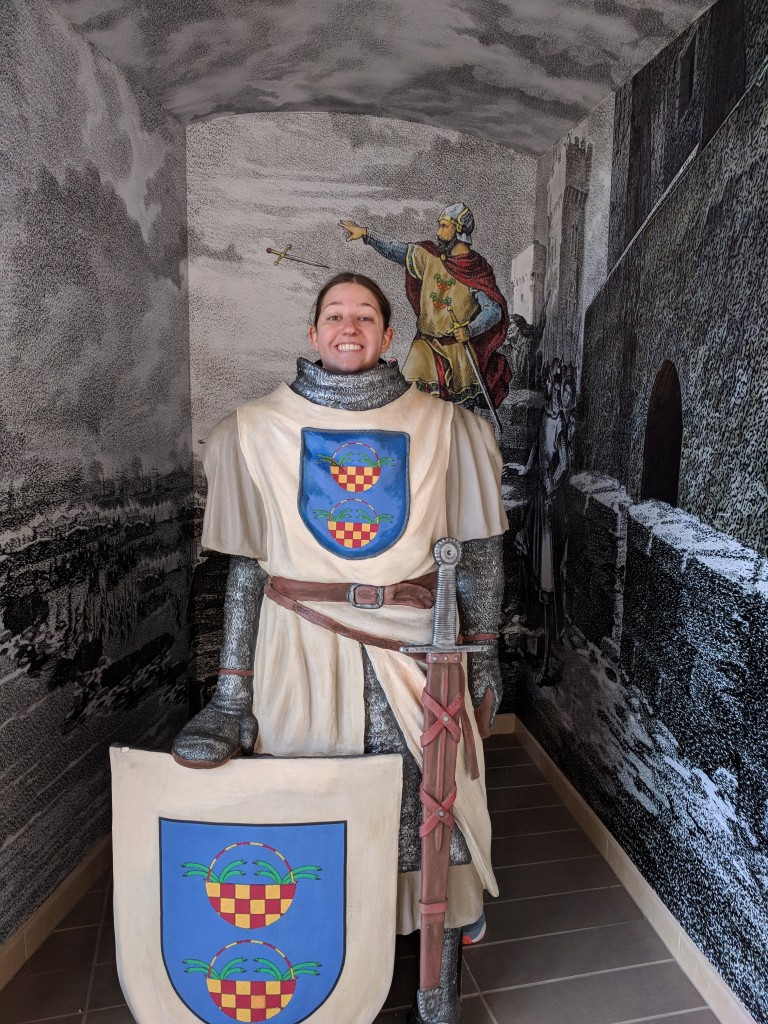 The view from another tower.

After the museum we decided to walk the short distance to the Isla de las Palomas. This is closed to the public now because half the buildings are falling apart. But you can walk down a road to the southernmost point in Europe. 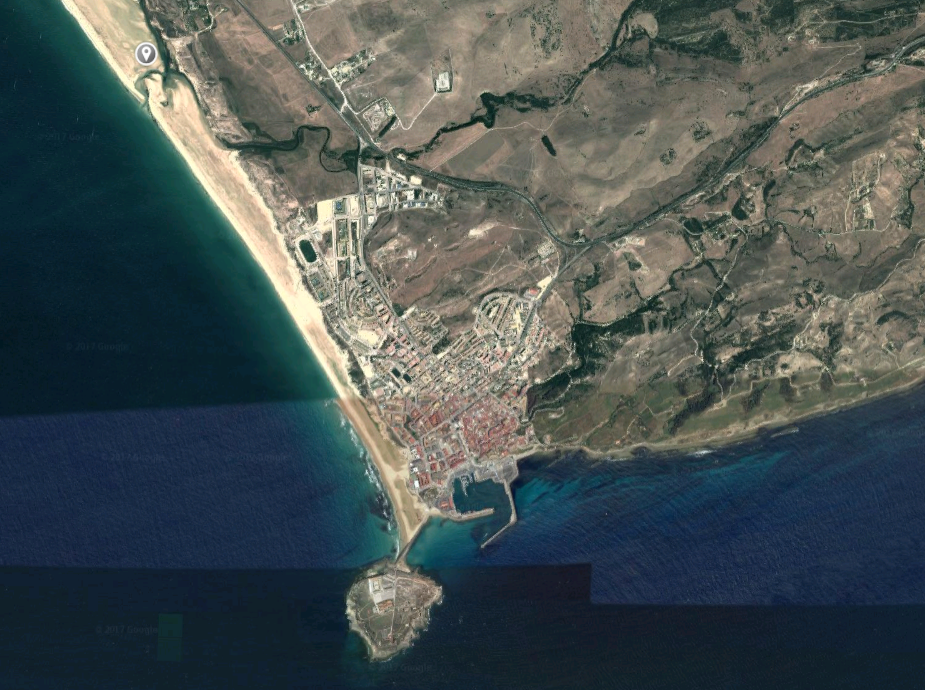 You can see the little dingle on the bottom. We decided to make the short walk. The problem is the waves break against the rocks and the intense winds carry the water pretty far. You can see how wet the road is.

We walked quickly but I stopped to take this artistic photo 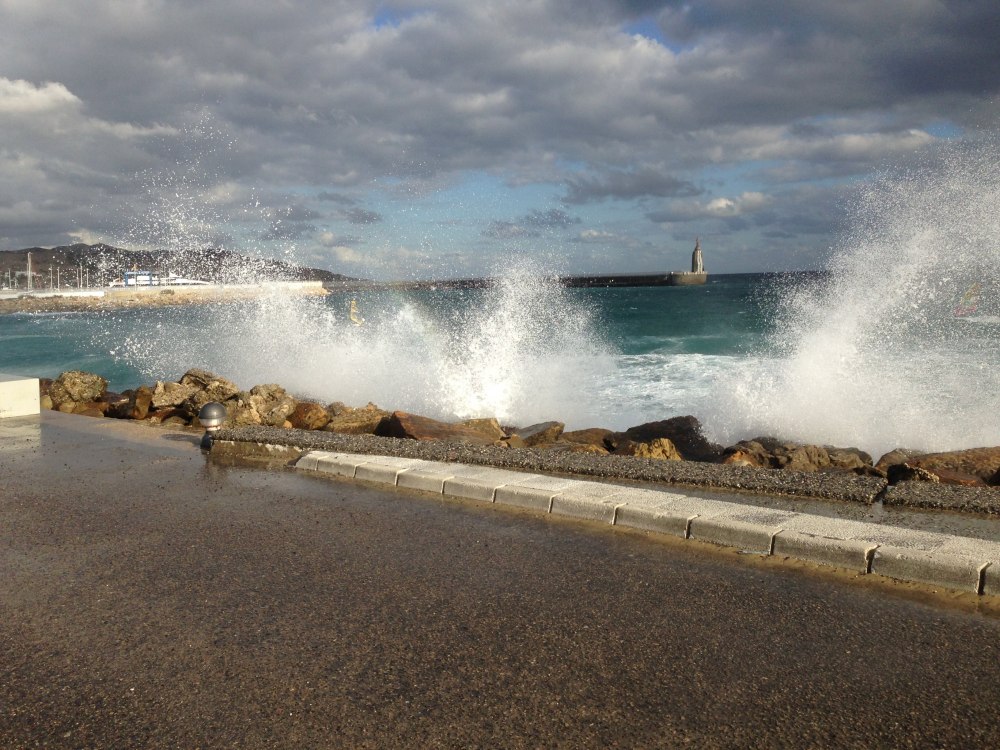 And got us drenched. Whoops.

The only thing down there is a ruined old sign saying you’re in the southernmost point. Still it’s a cool walk.

We watched the sunset while eating some roasted chestnuts. It was an oddly perfect combo.

We thought this was an interesting picture, the sun reflects off of the water on the beach. There’s a river that meets the ocean around here that gets flooded backwards at high tide. So the water fills the back part of the beach for miles – like a huge line of stagnant water. This is important in the next blog so remember that the water does this. For now enjoy the picture.

One thought on “Tarifa”