We’re huge museum people. On the day Chris proposed in Berlin we had a nice time and cried tears of joy and professed our love but then went straight to a museum because that is our way. So that was our plan for Lisbon. We got a 72 hour Lisbon Card for 40 Euros each and then challenged ourselves to hit up as many museums as we could to make 40 Euros worth it.

We started the Museum-ining (like reckoning) with some cereal. For one, New Years resolutions fail early so we didn’t make any then went to eat dessert for breakfast on the 2nd. Also Museumining is hard work so you need energy.

This was a super cool restaurant called Pop Cereal Cafe. There were imported American cereals all over the walls and a bunk-bed instead of a table for kids to eat on.

You could mix your own chaotic mess or get one of their pre-tested pre-made ones. Chris got King Cocoa – cheerios, nutella filled cereal, white chocolate filled cereal, shredded coconut and chocolate. 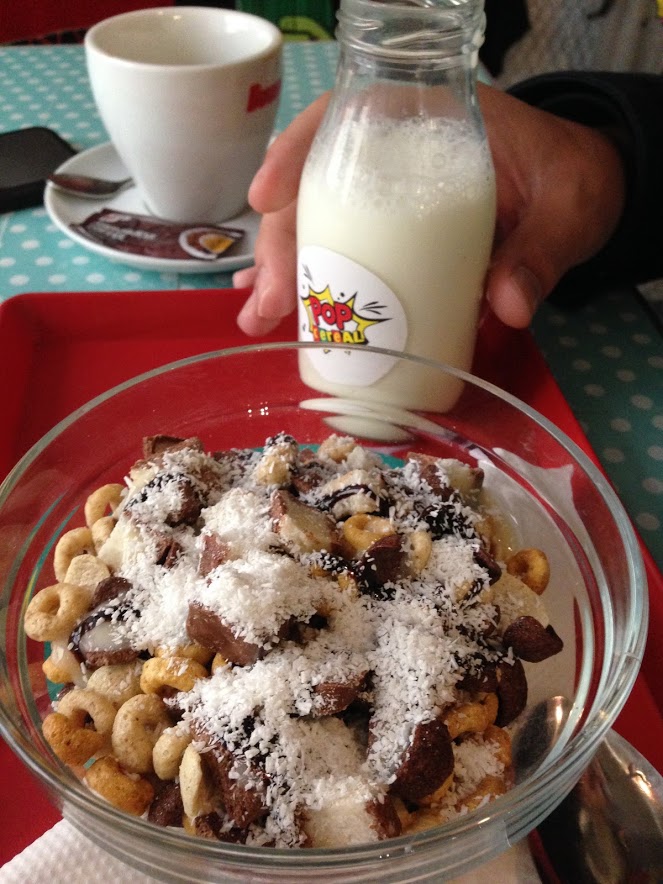 I got one called “Final Fantasy” it had rice krispies, frosted flakes, pudding (yes vanilla pudding right there in the middle of the bowl), whipped cream, “butter cookies” (like crunched up ice cream cone), toffee and sprinkles.

And of course coffees because we’re adults. Then it was time to walk it off around the city.

The Lisbon Story Center (without pass €8)

Which was just next door to where we got the pass. We have to be honest and say this was terribly done. There are no plaques to read, you have to get an audio guide and just get pushed around watching silly videos loop. We had really hoped this would be a good place to start since we know nothing about Lisbon’s history. Really we just got silly childish narrations. There was a room to watch a recreation of the Great Earthquake of 1775. The video was well done and helped us understand a lot about the rebuilding and how bad it was. This video was the only worthwhile part.

This was right next to the Se Cathedral. Both were pretty cool. The Romans built this huge huge theater overlooking the Tagus River as a way to show off. At one point it was big enough for 5,000 people to fit inside. It was actually forgotten about for a while and a road went right over it. Now it’s excavated and you can see right where the street ends and the covered archaeological site begins. 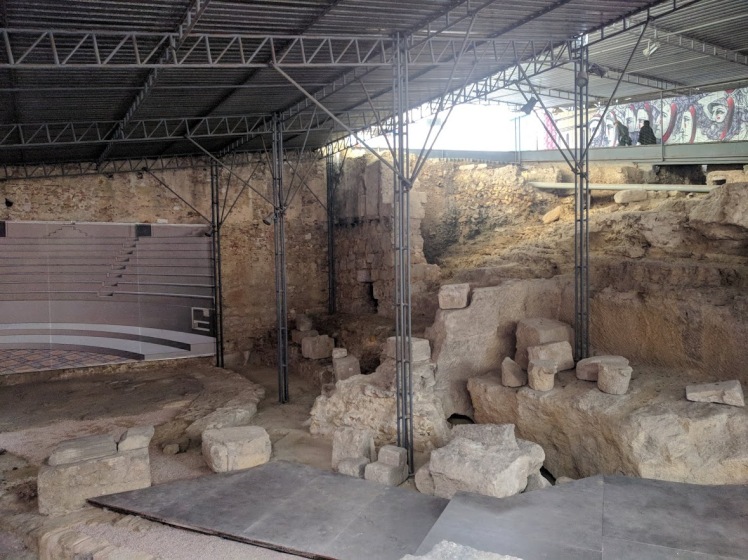 This part is free but the museum across the street isn’t. It’s poorly organized/chaotic. You go downstairs and around and around many times to see things. It has some cool artifacts which were nice. They did something cool I’ve always wanted to see a museum to and have a map corresponding with their artifacts. 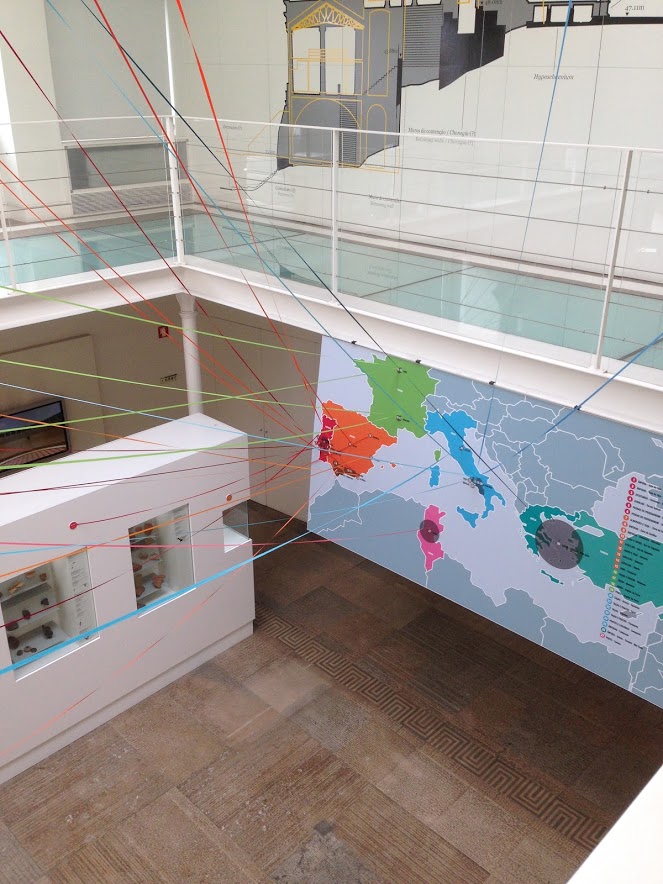 So the map has colored ribbons leading to the artifacts all around the room. Not only is it pretty but it provides a little more context as to where everything came from. Romans moved around a lot and imported lots. So the museum was filled with things from everywhere.

We walked by Castle Sao Jorge and decided to skip it because the line went down the hill and around the corner. Instead we went to the

There are fado (local music) singers, soccer players, writers and plenty of presidents actually entombed here. There are also cenotaphs (empty tombs for those who aren’t brushed up on their Greek and Latin) to other famous Portuguese people. We thought this was a very beautiful place and learned more history here than in other places. It’s like a human museum, you can read the plaques and find out more about these people’s lives. 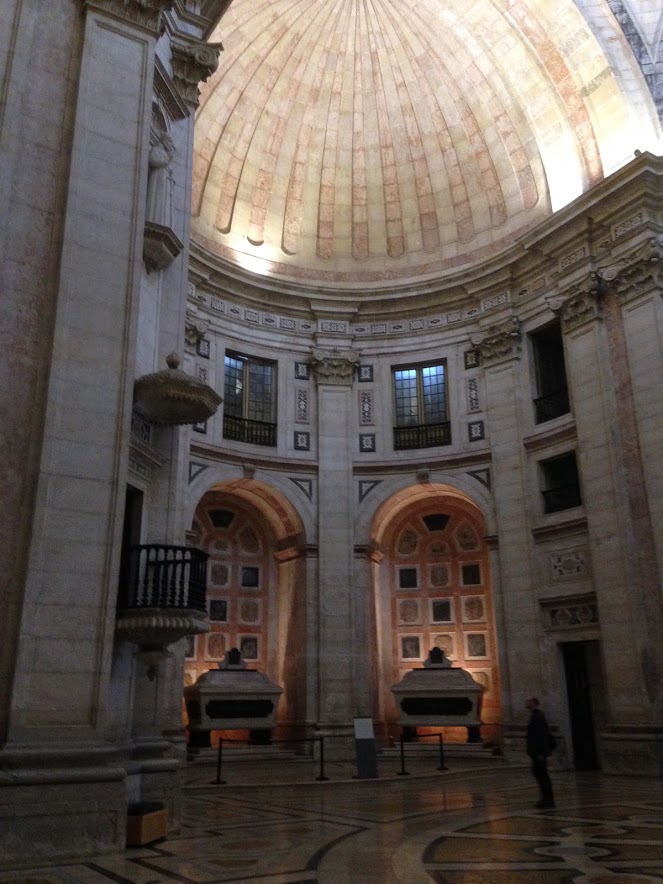 There was Pedro Álvares Cabral, discoverer of Brazil; Afonso de Albuquerque, conqueror of Islam, spreader of Christianity and trader of spices (also damn good naval navigator). Nuno Álvares Pereira helped get Portugals independence from Spain (not called Spain at the time). Of course the stars of the show are

Prince Henry the Navigator who instigated the age of discovery. He woke up one day and said no more sitting still. Lets go trade things and find new routes to trade new things. Things we’ve never even heard of and places no one even knows are there – lets go do it. He didn’t say that but that’s what he did.

and Vasco da Gama who was the first European to get to India via the sea. Thus linking Europe and Asia for the first time. Christopher Columbus didn’t do this even though he thought he did and wrote letters saying he had. Nope. Vasco de Gama.

I will say for anyone going that the roof isn’t worth going up to. It’s a long climb and you can get enough of those around town. The view from the top looking down was alright:

But if you want to see a good view of the city head to the nearby lookout: Miradouro Sophia de Mello Breyner Andresen. Which is what we did.

Because we were walking we took longer to get from museum to museum. Not today. We took the train from Calais to Belen (without pass €1.20. But you’re saving your sanity. The lines to buy tickets were madness and half the machines were out of paper to print tickets. They still took your money but wouldn’t print your ticket. So you had to wait in line for 30 minutes at the window to get someone to physically break open the machine and put paper in to back-print the ticket. Nope! We were saved from this BS by having the pass).

We saw the Belem Tower but left the line after it hadn’t moved for 15 minutes. Instead we went to the nearby

This was chaotic like many other museums. You buy tickets in the middle and can go to the left or right. The left wasn’t that interesting but the right side had some great mummies and Egyptian things. Then we had to go through a metal detector and keep our phones in plastic bags (???) while we looked at a gold exhibit. The gold was neat, it showed how humans have taken gold and started with something basic like a loop for the finger then turning it into elaborate works of art that jewelry is now.

Neither of us wanted to go but there was nothing else to do in Belem that didn’t involve a 3 hour line. But this ended up being the most interesting museum we have ever been to. 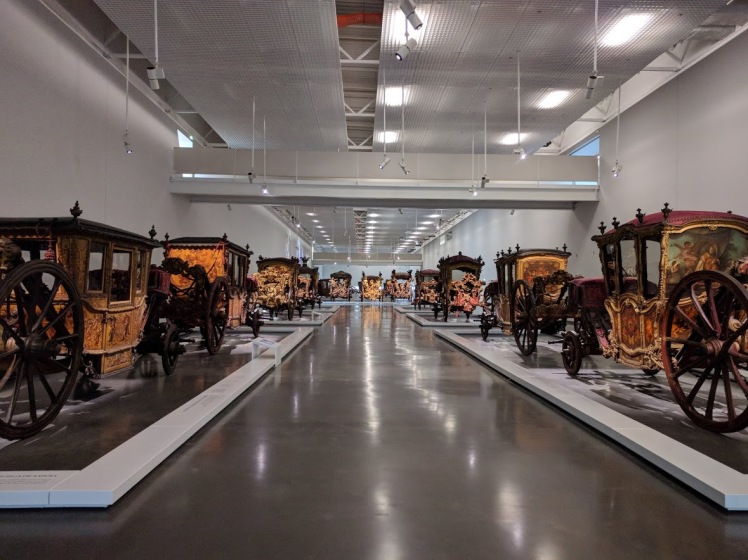 The museum is a huge warehouse filled with royal coaches as well as examples of the evolution of coaches. You could walk around and read more about them or watch movies about coaches projected onto the walls. They even had their own interactive app to see inside the coaches with a 360 degree view.

They all had information like who’s coach it had been and what it was used for. There were many for wedding adventures, like sending a woman off to be wed so they commissioned a special coach. Also a coach for the pope and one was for the baptism of a baby boy. All of the royal ones had insanely beautiful carvings and gold plating everywhere. 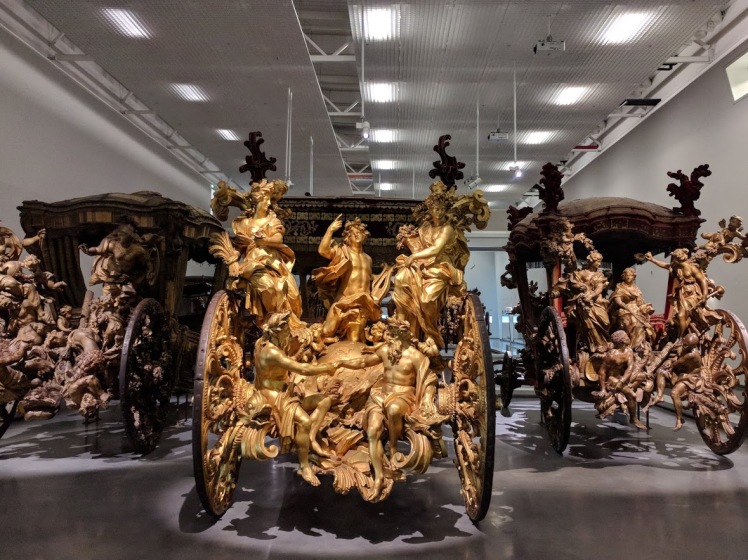 We would recommend the coach museum over probably most of the museums we went to.

For our last day with the pass we headed to the Calouste Gulbenkian Museum. This is a bit difficult to get to and at the end of the day we saved  €5.35 in subway fare with the pass.

The museum pass doesn’t include this since it’s a private collection. We saved  €2 for an entry fee of  €8.

This was the most highly recommended museum in Lisbon and it was worth it. There was art from Rembrandt, Degas, Monet, Gainsborough, Renoir and Manet. Besides the art there were tiles, rugs, tapestries, serving dishes, ancient Bibles and Korans, Chinese vases, desks and chairs that were gorgeously made or imported from far away lands. This is a seriously insane collection of art. Considering it was a private collection is unreal. I mean there are full on funeary masks from Egyptian mummies. This guy was wealthy. According to Encyclopedia Britanica Calouste Gulbenkian “is credited with being the first person to exploit Iraqi oil” in 1897 he was way ahead of his times.

So fortunately his will said turn this into a museum and so they did. And it’s probably the best thing in Lisbon, so thank you Calouste Gulbenkian and thank you Iraqi oil. If Gelubenkian hadn’t bought these things and taken good care of them with oil money we might not have them now.

In a 1955 Life Magazine someone said about him that “Never in modern history has one man owned so much.”

And actually not everything he owned is in his museum, only 1/6th of it is here. Of the 6,400 things he owned many are in other museums. 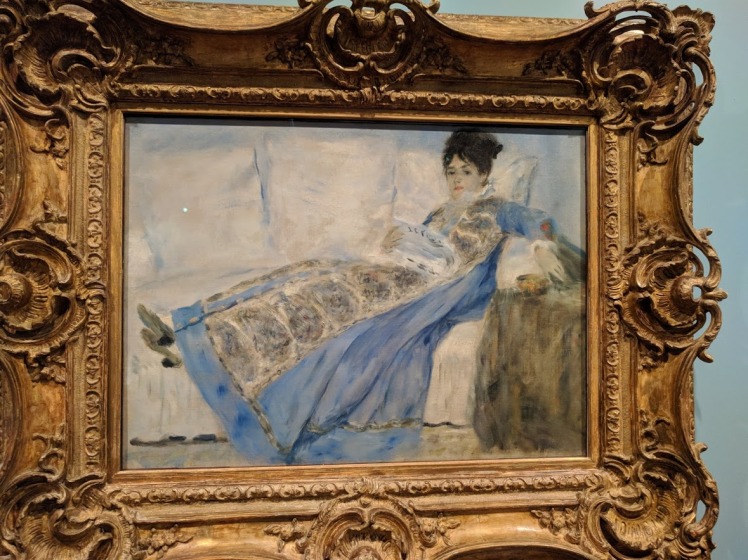 The 10 euro fee included entry into the Modern Museum across the park. We went and found it alright. It doesn’t have any famous works which is the point – it’s there to promote local modern art. Not famous pieces.

We took the subway to the outskirts of town to the

We had been looking forward to this one more than the coach museum. Sadly it’s far from the rest of the big things so people don’t make the journey out here much. Which is a bummer since it’s pretty neat. It goes over the history of clothing, particularly in Portugal.

As strange as it sounds, this is the museum we remember the best.

It answered questions like how did women get those huge butts when that was in style but didn’t answer if those women could ever sit down.

It also had this:

Clothes from the 90s. In a museum. Where they belong. I am so sick and tired of the 90s being in style right now. Take off your overalls and dumb patterns and put them back in a museum.

If you walk across the super fantastic garden there is the Museum of Theater which is included in the pass as well. We just went home though.

We bought the passes for 40 Euros and used them for 42.75 Euros worth of entry fees and transportation costs. I’m sure if we had hit museums harder or chose to wait in 2 hour lines (rather than going home) we would’ve seen more.

The Lisbon Pass is worth it because you just scan the pass and get on the trains. You don’t have to buy tickets or get screwed by the machines being out of paper.