Bullfighting is a very distinctly Spanish tradition. It’s like a sport and an ancient cultural tradition wrapped up into one event. April is the beginning of the bullfighting season, and it will end sometime in September. Given the controversial nature of the subject, I’ll try to stay impartial. Also, there are few pictures, because I don’t want to steal photos from other sources, and we’ve never been to a fight.

It’s very difficult to pinpoint where, when and why bullfighting emerged.

When Spain was a part of the Roman empire, a kind of bullfighting existed at that time, but more as a different take on normal gladiatorial games. There weren’t many rules, and it was probably just some poor bastard with a spear vs a 1000lb bull. The Visgoths (the people in Spain after the Romans), as well as the Moors (the people after the Visgoths) continued the tradition. The Moors might have had a hand in “art-ifying” the sport, but it’s hard to say. According to some sources, they disproved of the simplicity of it, and instead made it into a regulated and artistic cultural expression.

At this time, bullfighting morphed into an “aristocrats only” kind of sport. A bull would be released into a town square, and rich guys on horse back would fight the bull with long spears. The horses usually died. Meanwhile, the mounted rich guy would have assistants on foot, whose job was to distract the bull with their brightly colored capes (probably to give him time to get a new horse once his had died). Gradually, the assistants started drawing more attention than the horseman. Eventually the cape-guys became the center of the show, and they started developing more lavish and technical moves to draw the fight out longer.

Then in the 1700’s, a guy named Fransicso Romero revolutionized the sport, and cemented the cape-guy as the star of the show. He did this by asking the mounted aristocrats to allow him to kill a bull, face to face, with nothing more than a thin sword and a small cape. He did it, and became a legend. He traveled around, performing his version of the bullfight, and others followed in his footsteps.

Because the sport no longer had aristocrats or dead horses, it became cheaper and therefore more popular.

What is it today?

I won’t lie. If you like animals, bullfighting is not the sport for you. Growing up, I remember seeing bullfighting portrayed in cartoons. All it usually consisted of was Bugs Bunny dressed up as a bullfighter waving a red cape around and dodging whatever was charging at him. It turns out actual bullfighting is a bit more…gruesome.

There are too many traditions, subtleties, variations and rules to really explain everything. Also, bullfighting exists in South America as well as Spain, and there are different traditions and rules etc in every country. So I’ll be brief, and only talk about Spain.

GENERALLY, the star of the show is the “matador”. A matador will typically have six assistants, two mounted, three a-foot, and one “sword page”

The two assistants on horse and are called picadores, they perform in the first stage of the fight, and their job is to stab the neck muscles of the bull with lances to weaken the neck muscles. Their horses wear thick padding to protect them from the bulls horns. Can’t have unnecessary cruelty towards animals, see?  The picadores have to toe the line between being too good at their job (and ruining the fight), and being bad at their job (and making the next stages too difficult for the other fighters).

Stage two involves the three walking assistants, called banderilleros. They carry little sticks with barbed spear points colored with the colors of their home region. They run at the bull and stick him with their sticks. They are supposed to get as close as possible to the bull, and escape with grace.

Stage three is the Tercio de Muerte (the third of death). Matadors are usually in the ring the entire time. They observe the bulls habits, and participate in the second stage if they feel like it. But in this last stage they are alone. He has a cape (usually red) and a sword. The red cape is due to tradition, and has nothing to do with making the bull angry. The bull has many reasons to be angry at this point, it doesn’t need a color to make it more angry, besides they are colorblind. He dances around the bull, in the stereotypical manner you are probably familiar with, until the bull is exhausted. Then he stabs the bull in the heart. If all goes well, it’s a quick death (ignoring the previous 20 or so minutes).

Very rarely, if the bull has performed super well, the public will petition the president of the ring to spare the bulls life. If this happens, the bull gets to leave and live out his days as a stud.

There is another variation that consists of a guy wearing normal-ish clothes pole vaulting (for lack of a better word) over a charging bull. It’s not super popular, but its becoming more popular due to the fact that the bull doesn’t get hurt/killed.

Is it dangerous for the bullfighters?

Kind of. They get injured not infrequently, but only 53 have died since 1700, with the most recent fatality happening in 2016. It happend on live TV, and spread quickly via the internet. This death reignited the argument to ban the sport.

There are those who declare bullfighting an integral part of Spanish culture, and others who say that the time for bullfighting has passed.

People against bullfighting say that it isn’t fitting with modern civilization or European attitudes towards animal rights, a popular slogan used is “torture is not culture”. They point out that, the myth of the bull receiving a clean death is grossly exaggerated. Besides the constant spearing of the bull, the matador as often as not fails to kill the bull with his first sword thrust. This leads to the animal dying extremely slowly and in a great amount of pain.

Defenders of bullfighting say that a bull raised for fighting has a pretty decent life compared to the average lives of the millions of cows slaughtered for human consumption every year. A fighting bull gets to roam free on a large ranch for the first three years of it’s life (compared to a cow raised for slaughter who usually lives for under 2 years in a feed lot). For a point of reference, a bull’s life span can be up to 20 some years under optimal conditions. Ernest Hemingway personally loved it. He had this to say, “Bullfighting is the only art in which the artist is in danger of death and in which the degree of brilliance in the performance is left to the fighter’s honor.”

The discussion on morality goes back and forth, but most importantly bullfight attendance has been decreasing every year, with only 8.5% of Spaniards attending a fight in 2011. Also, bullfighting is subsidized by the Spanish government, a move that angers many people irrespective of if they are for or against the sport. Many people, probably correctly, say that without government subsidies, bullfighting would collapse, and if it can’t stand on it’s own then obviously it shouldn’t.

So right or wrong, we are likely witnessing the end of bullfighting in Spain. The youth of Spain are solidly against it, and even the elderly population have started turning on it.

Our town has a small bull ring, but it’s been closed and abandoned for many many years. Nobody I’ve spoken to remembers it ever being used. However, our provincial capital Jaen does have a functioning bull ring. One of our first pictures in Spain was of a poster advertising an upcoming fight, and for your enjoyment, here it is. 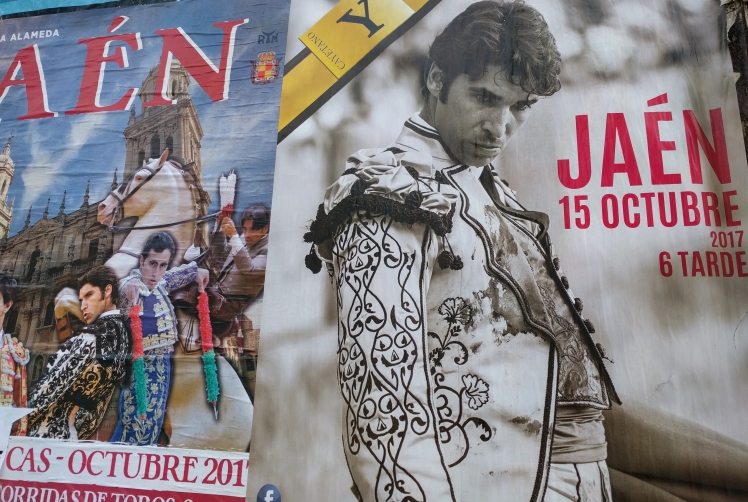 On the left, you can see the three banderilleros with their colored stabbin’ sticks, as well as the mounted picador. I am assuming the man on the right is the matador.

One thought on “Spain Sunday: Bullfighting!”