Sure a lot of posts have been about food lately (Eating, Tortilla Nutrition and a recipe). But whatever, we’re doing a drink this time. Doesn’t count.

Ten countries in the world account for 2/3rds of the whole world’s wine consumption. Spain is number 8 on that list with a whopping 10 million hectoliters (hl) of wine (1.3 billion bottles). Whoa, 1.3 billion bottles? That’s a lot. Yeah but America first. America smashed everyone with 31 million hl (and all the Americans are like cool but what’s a liter?) that’s 4.1 billion bottles. America drinks more than anyone.

So China drinks more wine than Spain. Interesting. Why are you doing a post on wine in Spain? We’ll get to that.

When Americans were asked what they want in a wine they said the country of origin was only 4th important to them (price was first). But when they are paying attention to the country Americans prefer American wine (America first) followed by Italian, French, Spanish and then Australian. But Spanish wine was mostly unimportant, only 32% of people said they had consumed Spanish wine (26% said Australian so it’s not far off).

When we tried to find Spanish wine in the US we struggled for a while. It was easier for us to find Australian wines than Spanish wines. The liquor store recommended French and Italian wines instead. Meanwhile some family members asked us if Spain was even capable of growing grapes – or if the olives were the only things.

So here is this country (America) that is consuming more wine than France and Spain combined. They don’t even really care that much about Spanish wines (or know about them). Spanish wine tourism is barely popular with Americans. And yet….

That’s right, Spain is now the number one producer of wine in the world. So we want to introduce our friends at home to Spanish wines. Source

And since Americans are still shaking their heads we can say 1 hl is 26.4 gallons.  So Spain made 602 million gallons of wine.

The average price we pay for wine is 1.50 and that’s because we feel like treating ourselves. You can buy a bottle for 99 cents and it’s alright enough. The highest price in our supermarket is 25 euros. There is only one bottle of this wine and it even has an electric security device affixed to it. Maybe it’s from the king’s own cellar, I don’t know. The average is probably about 2-3 euros. (Current Euro-USD conversion means 2.70-3.70 so not that much more).

“We’ve boosted our exports significantly, but probably too rapidly, so that we’ve now got the wrong price pyramid, with a lot of wine sold very cheaply,” said Rafael del Rey, the director of the Spanish Observatory of the Wine Market, an institute that researches and promotes the country’s wine. New York Times

Italy brought in €6 billion last year. France  €9 billion and little old Spain got €2.8 billion (keeping in mind how much more Spain produces. Damn). Source. So because Spain produces so much wine, it sells for dirt cheap.

Spain has the most vineyard land in the world, they produce the most wine, but they aren’t drinking it (and no one else is, either). Where else could it be going? Into everyone else’s wines. Spain makes so much damn wine that they’re exporting it to all their neighbors who are repackaging it and selling it as their own or as blending it with their own. In all likelihood, your French/Italian/American wine was at least partly Spanish.

Of the 22.8 million hl of wine Spain produced, 12.6 million hl were exported to other countries. When it gets there, it’s rebottled, relabeled and sold for up to 3/4 more than if it had come from Spain directly.

You’re not meeting Spanish wine for the first time today, you’re meeting the superhero behind the mask. You’ve probably had more Spanish wine than any other, adn you didn’t even know it. It’s funny because Spain doesn’t even like wine. They’re just really good at heartlessly growing and producing it. Twenty four hours a day they make wine. They don’t ever stop.

Two years ago, a bunch of French winemakers (vintners?) hijacked five trucks loaded with Spanish wine and drained them to protest unfair competition. Did Spain care (yes) no, they just kept making wine. Actually they did complain and one guy bitingly said that “each country has its strengths.” Aka France is BS and cannot make wine.

You know how Americans mostly drink American wines. Yup, they’re from Spain, too.

Most Spanish wine (more than half) comes from Castilla la Mancha which is smack dab in the middle of Spain (and right next to Madrid). 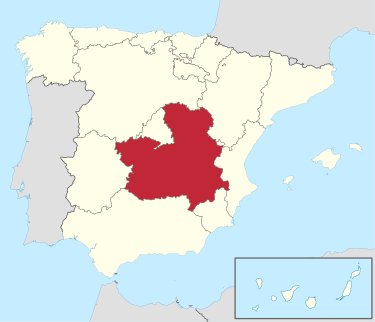 Castilla La Mancha isn’t the historical wine producing center of Spain. That would be La Rioja, a bit further north. Some of the best wines come from La Rioja, but as far as production goes, Castilla wins by a long shot.

Every region in Spain can (and does) produce wine. Even the little islands. Here’s a map of Spain’s wines. Spain uses the most land for vineyards (more than any other country) – using over 2.4 million acres.

A wine blog said that Spain’s wines were really just cheap and went well with Mexican food. That’s hardly a compliment at all -but, you know, a good start. More detailed reports on wine focus more on cava (like champagne), or sherry (which comes from Andalucia, if you want to know). Other people probably just think sangria when it comes to Spanish wine.

But Spanish wine isn’t completely cheap/boring or exciting and different. It’s the same as French or Italian wines – people just don’t think about them the same. French cooking uses wine, Italian food pairs with wine. Spanish wine… just is. You don’t think exoticism or romance with Spanish wine -you think tapas or sangria.

So every region makes wine in Spain. Spain has the most land dedicated to wine. They have the cheapest prices. And they made more wine than anyone else on earth last year. But they’re making hardly any money off of their wine. This is ridiculous. It’s really because their neighbors are more famous for wine. Economists are saying the only way out of this trap is to stop making wine (wow) and to start promoting premium wines.

Drink this, not that

We think the best way to get anyone to try something new (or accept Spanish wines into their lives) is replace old favorites.

Next time you’re thinking of having a sparkling wine or a champagne – try cava.

Sidra is not technically wine it’s like wine. In places where they can’t grow grapes (Asturias and Basque) they grew (and yeah, fermented) apples.

We’re obviously terrible at writing about the life story of a barrel that brought you the “coconut and dill flavors” or the history of the damn dirt that brought you those sea breezy notes. We can’t write about wine. If you want more information please take a look at professional wine-talker-abouters here –(Beginners Guide to Spanish Winese) and Top Spanish Wines Under 20.

The last wisdom we can impart – mix that wine up

Don’t drink sangria. No one drinks sangria here. It’s only for tourists. Try:

Yeah don’t judge – but this is equal parts red wine and coca-cola. Holy crap this is surprisingly good. If you have a really strange amount of red wine left or a coke that’s going to go flat if you don’t drink it – just try it.

And of course, if you are mixing wine with soda, you may as well get the cheap stuff. Luckily there is a section of wine intended for mixing at our local store!