Most people have either heard, spoken, or learned Spanish at some point in their lives. Very few Americans are exposed to the Spanish accent. In the USA, the overwhelming majority of Spanish speakers are from Mexico, Puerto Rico, or Cuba. So if you hear Spanish, it’s most likely to be spoken with one of those accents.

So it usually comes as a surprise to many people when they hear Spaniards for the first time, because they speak with a bit of a lisp.

The “lisp” isn’t technically a lisp, in that it isn’t a speech impediment, since it isn’t directed at all “es” sounds. Only Ci, Ce, and Z are lisped. It leaves S alone completely.

There are two basic styles of Spanish pronunciation, Seseo and Ceceo.

Most of Spain is Ceceo, while most of Latin America (all?) is Seseo.

Well, lets look look at the word “gracias” for example. I’m sure most of you would pronounce the ci as an s. However, in most of Spain it would be pronounced like grathias. If a C is followed by I or E, it’s lisped. But notice the S at the end of gracias is still pronounced as S.

Corazón, with it’s Z in the middle, is pronounced corathón. All Zs are lisped.

The city of Barcelona would be pronounced Barthelona by most Spaniards, but not by actual Barcelonés (the people from Barcelona), who do not lisp.

Why would anyone do this?

The common legend that most people hear is that some king from Spanish history had an actual speech impediment. The people of Spain started mimicking his lisps either in solidarity, or to avoid offending him, or because he made it fashionable.

This is a total myth.

It doesn’t really have an origin, at least not one that people who study Spanish linguistic history can pinpoint. All languages are alive, they evolve and adapt to their surroundings. There are some theories that it was a necessary change to avoid confusion between different words that sounded too similar, especially before standardized spelling and general literacy was a thing.

Why doesn’t Latin America use it?

Some places in Southern Spain, and most in the Canary Islands, are Seseo (they don’t lisp). Most of the people who left Spain to settle in Latin America were from these places. This is one explanation, though there are others.

Also known simply as “Andaluz”. We’ve probably mentioned it before since it’s genuinely fascinating, but Andalucia has a crazy accent. Crazy as in interesting and challenging. There is a common saying that people in Andalucia “eat” their words, as in they barely pronounce them.

Saying “gracias” in our village sounds like this “grathia“.

There is a war on the letter S here, if it isn’t outright dropped, its slurred. Bear in mind that adding an S to something is how many words are pluralized. For example, “Mi hermano” vs  “Mis hermanos”. The tendency to drop the ES sound makes them sound nearly the same. It’s confusing at first, but now I’m so used to hearing it that I do it myself sometimes. “Th’i, quiero do’ bol’a’ por favor” (Yes, I want two bags please)

Here is a great example of what it sounds like. As far as I can tell, the guy in this video is from Almeria, a place that is both in Andalucia, and speaks with Ceceo.

Most of Andalucia is Ceceo, but some cities are Seseo. In our province alone, you can have one villages speaking with Seseo, and the next speaks with Ceceo. Seville is a major city in our region, and it is famously Seseo.

I have talked with many of my co-teachers about their accents, and something they all say is that the Andaluz accent is looked down on by other people in Spain. I guess it’s comparable to how the Southern accent in America is viewed. It’s seen as uneducated, backwards, provincial, rural, poor etc. However, the people who speak with it are proud of it.

As much as I enjoy learning and attempting to speak the accent, learning Spanish here has been a challenge. Before we came, I remember reading something that basically said “if you can learn Spanish in Andalucia, you’ll understand it anywhere”. Generally, when Kaeti and I are walking down the street, we miss 90% of the words we overhear. But every now and then we find ourselves next to the hotel. Who stays in hotels? Out of towners. And if we are lucky, some of those out of towners might be from somewhere other than Andalucia . When we over hear them speaking, its like a switch has been flipped, and suddenly we understand 80% of what they are saying.

I don’t mean to paint it as some unintelligible nonsense accent. I’d say that personally, when I am having a one-on-one conversation with someone who has the Andaluz accent (as opposed to hearing snippets on the street), I can perform decently well. But I have noticed that I have to focus harder on what they are saying, and it takes just a tiny bit longer to understand. When I am with some of my lower level students though, I find that they are IMPOSSIBLE to understand. They want to communicate, but their English level isn’t sufficient to get their point across, so they resort to Spanish. A combination of their accent, their youthful idioms and slang, and the sheer speed at which they speak, not to mention that they are all speaking over each other…they may as well be speaking Italian at me.

I’ll leave you with this link here. The link will take you to a blog that seems to have been written by someone dedicated to educating people about the accent (all in Spanish). In it, there is a link to another great explanation about the specific aspects of Andaluz (again, all in Spanish, but for those curious), as well as this gem below. 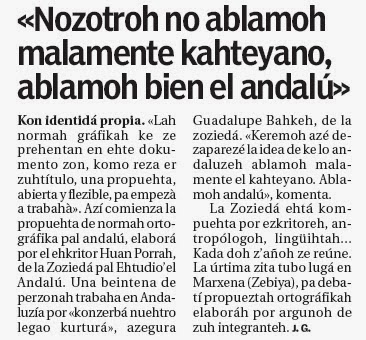 The title reads “Nosotros no hablamos malamente castellano, hablamos bien el andaluz.” Translated (directly) it says “we do not speak Castilian badly, we speak Andaluz well.” (while that might not sound like they are speaking well according to English grammar, its perfectly fine in Spanish. They aren’t trying to be sarcastic.)