In our town of Manacor I don’t think I could count how many windmills there are. In one block alone there are at least 10. The vast majorities of the windmills here and in Palma don’t have their spokes/vanes/blades anymore. Also most don’t have their coned top. Most look like they’re falling apart like in this picture.

Even without blades or a roof they used to be windmills. And the questions are: why are there so many windmills all over Mallorca? Are they all the same? Are they still in use? How long have they been here?

How long have they been here?

The concept of windmills were probably brought over by the Romans or Moors. So a long time ago. They’ve changed a lot since then to have a unique Mallorcan flare. Some had a steering pole so you could change the direction to the wind. Some were painted blue and white which has become the traditional coloring of them. In the 1600s they were so important that millers got together and created a guild. The guild owned all of the repair tools so everyone had to work together (and couldn’t buy their own stuff individually). This guild chose Saint Lawrence as their patron saint and some windmills have his image on them.

Some were covered in cotton or wool which made a great impression on Pope Pius IX who visited Mallorca in the 1850s/1860s. Maybe. This could just be a rumor.

Are they all the same?

No, there are 2 kinds: Flour and water windmills.

Probably the vast majority of windmills in Manacor are former flour mills. They’ve been written about since the 1400s. They were probably around before then (Romans/Moors probably brought them to the island) but maybe no one wanted to write about them. The ones still around probably date from between the 1600s-1800s. You can tell, the stairs are worn down severely from people walking up and down for hundreds of years.

The World Monument Fund says there used to be around 900 on the island but 200 have probably been lost – but First Mallorca says over 3,000 flour mills are on the island (this feels more accurate when you look around) 600 are considered “classical.” On a short walk through Manacor we counted over 15.

The base of these mill is called the cintell and it’s actually a small house. It serves as the foundation of the windmill as well as the home of the miller and his family. Most of the former flour mills in Manacor are now homes.

Some are remodeled and others are dissolving from age. When we were looking at apartments there were at least 3 listings for windmill homes. They’re gorgeous, obviously with arched ceilings and intricate stone work.

Some have the coned top intact. Most still have the cylindrical stone tower above them – while others have chopped the whole tower off and continue living in the stone base. There are many guilds and groups “Friends of the Windmills” which will help you remodel your windmill at little to no cost to you. Additionally some tourist taxes have gone into remodeling the windmills.

The tower used to hold the millstones. Some of the remolded versions online have been converted into bedrooms.

The vanes were made of metal and would be covered with cotton or wood to make sails. I’ve never seen one that still has fabric on the sails.

People deposited their grain at the top, the wind would turn the sails which would turn a driveshaft. There were two millstones inside the tower, one was fixed and the other is connected to the driveshaft which turned with the wind. The grain would be milled into flour between the stones. As more grain is added it would push the finished product down onto ramps where it could be bagged.

In the 1890s the railway made the grain mills less important since you could just bring food anywhere on the island. According to Mallorca Incognita the last one stopped milling in 1964. 500+ years is a pretty good run for any piece of technology.

These were used to extract water from underground wells or reservoirs. This water was usually for irrigating crops.

These are the most common windmills you’ll see in the Palma area.  First Mallorca says there are around 2,500 water extraction windmills. They can have a platform below them but many just stand directly on the ground. 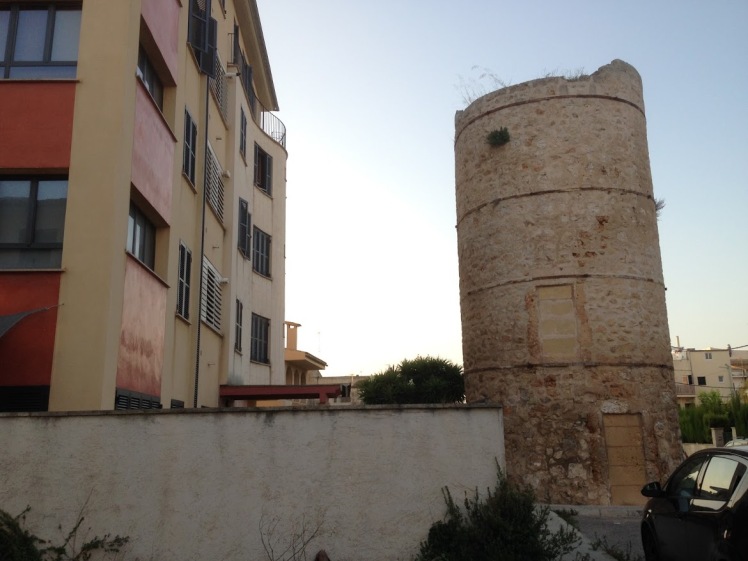 The tower can be square or rounded – the top may have angles to it. There are modern versions with metal blades (that are still in use in agricultural areas like Pla de Sant Jordi). In short there are loads of different kinds of windmills – you can see a whole list here.

The first water mill dates back to 1845. It wasn’t actually made to irrigate agriculture. It was made, as Trump would say, to drain the swamp. There was a swampy bit of land and a Dutch engineer was like “I can fix that.” A local man figured he could use it to actually irrigate something so he tweaked the design to have wooden blades but no real sails – called a ramell (after a flower in Catalan). Every man since then took a look at the design and made tweaks to the blades or the shapes. One was even close-able like an umbrella if it got too windy.

At the best of times they could pump 40,000 liters and hour which is way too much and ended up causing people to dig deeper and deeper each year. They were still being used until the 1970s. Three things happened almost at once that killed off the mainstream use of the water mill

So these mills didn’t last as long as the flour mills. They barely made over 100 years.

So in short why are there so many windmills all over Mallorca?

People need to eat and drink. Mills provided water to crops and mills crushed the crops into delicious flour to make bread. We didn’t always have railroads or boats to bring things over and people needed to grow their own food.