We had already celebrated at home before we left so we spent Christmas day museum-ing. Our first stop was the Hofburg. This is but one of 62 former palaces in Vienna.  62 palaces comes out to 2.5 palaces per square mile of Vienna or 1 palace for every 260 people, if you were wondering. It would be a waste to have them all sitting around waiting for the royal family (which doesn’t exist anymore*) to come back so they have since have been converted into hotels, museums, embassies and homes.

The Habsburg family is one of the most famous and influential royal families in Europe so you should probably know a little about them. Note it’s spelled Habsburg in Europe and Hapsburg in America.

So the Habsburgs ruled this great chunk of land for 300 years, but apart from that they managed to add Hungary, the Czech Republic, Romania, Croatia, and some other Balkan countries to their personal collection. They also scooped up all of the Spanish empire, including Spain and Mexico, when the crown passed to a distant Habsburg who just happened to also be the king of Spain. Even though they were hopelessly inbred to the point many couldn’t speak or eat and many had the mental capacity of small children.

Do they still exist? It’s complicated.

The main branch died out, and people really shouldn’t refer to the modern descendants as Habsburg anymore but it’s an important name so the Vaudémont branch of the House of Lorraine, (a part of a part of a part of the Habsburg family) still call themselves Habsburg.

It’s not just the physical line dying off. After WW1 Austria morphed into a democracy, Charles the (1st of Austria/3rd of Bohemia/4th of Hungary … depends on who you ask) spent the rest of his life trying to restore the monarchy (died 1922). He had a couple kids, the last of which died in 2011 that were the last official crown princes to a country that technically didn’t even exist anymore.

The Hofburg used to be the main imperial palace (of 62 freaking palaces). There were three parts to it that all had separate entry. The Sisi Apartments, the Hofburg Apartments and the Silver Collection. We had absolutely no interest in the silver collection (literally all their dinnerware) or Sisi Apartments. Our museum pass told us to head to “Entrance B.” So we did. It immediately started talking about Sisi. No one had mentioned we were in the Sisi Imperial Apartments, in fact I hadn’t even wanted to see her apartments at all but we were sort of tricked into going because they said we must enter through “Entrance B” if we had the pass. Whoops.

Sisi is the most famous Habsburg of all, and we had never heard of her before stumbling into her living quarters. She married into the family and from what it sounds like, she hated it. It was really chilling to see her emo poetry and private journal entries etched onto mirrors (what’s up with that?!) talking about how her life was a prison and her mother gave her up to this cruel life. She had no privacy at all in life. She was an early celebrity who was worshiped by everyone in the empire. It’s not like she escaped this crushing fame after dying as literally everything she has ever touched was in the museum – her baby shoes, under things, dental kit, doctors records (no joke her doctors notes about her). All her dresses were everywhere and they would talk about how insanely thin she was (eating disorder) but then how very beautiful she was (as if it was worth it). Then you would turn the corner and there would be another quote about how much she hated her life printed on a mirror. Ooof. They kept using terms like “melancholy” and “aloof” but lets face it she was clinically depressed. Things got worse as her mother in law literally stole her first two babies and named them after herself and wouldn’t let Sisi breastfeed or see them, and then her only son commited suicide after murdering his mistress.

It’s a long, tragic story. So she would just travel all the time to get away from her husband and the kids she wasn’t even allowed to see. She was warned of many assassination attempts but probably wanted to die at this point (her husband originally assumed it was suicide) so she kept traveling openly.

She was inevitably stabbed by an assassin. They said she was stabbed by a “file.” There were nail files etched with her name all over the gift shop. We are sure that wasn’t intentional, but damn.

The Sisi Apartments were a confusing maze through bummer town and I wouldn’t recommend them to anyone unless you already knew who she was. The Hofburg parts we had actually wanted to see were interesting to see and enjoyable. No photos were allowed inside any of it, so here’s a photo from the outside.

Our next stop was the Imperial Treasury. While some families have family heirlooms (this is the crown your great grandpappy wore) the Habsburgs seemed to just commission newer bigger better flashier heirlooms anytime anyone did anything of worth. The treasury was just an insane display of wealth. A place Scrooge McDuck could swim in. And it wasn’t all just crowns and gold there were things that were important to them for religious or sentimental reasons.

There were a lot of religious icons, like a toe bone or a tooth supposedly belonging to one of the apostles lovingly preserved in pure gold and gem laden boxes. There was even Christ’s very own holy loincloth. All of these things were worth fortunes in their time. These people had money. And louder again for the people in back: these people had MONEY!!!!!

There were two treasures that stood out from the rest because they are neither golden nor bits of dead saints. These would be the Holy Grail (they’re digging in the wrong place, it was in Austria the whole time!), and a unicorn horn. These two treasures were declared “inalienable” treasures of the Habsburg family by one of the more sane emperors. He did this because he knew that if he didn’t someone in his family would eventually pawn them off, and because he genuinely thought they were special. However, the unicorn horn turned out to be a narwhal tusk, and the Holy Grail is….I have no idea. First off, it isn’t a grail. It’s more of a sink. But it is made from a gigantic piece of agate, and is a genuinly awesome bit of craftsmanship. It was said that in certain lights, and only to certain people, the name Xristo (greek name for Christ, merry X-Mas everyone!) can be seen in the grail. We didn’t get a picture of it but you can see it here.

The best thing about this power-money family is that they were all about art and science so all the museums in Vienna are over the top amazing. And not just because they were inside former palaces. They bought, stole and preserved anything that even remotely interested them. It’s key to remember that these people were professional art collectors, and that most of their Empire seems to have been financed entirely through art investments. If money was ever tight, they could just melt down or auction off some of their things – I can’t remember exactly what it was but there were chairs or pitchers that were all gold and they melted down all but 3 to make sure that some were preserved. Thanks for the foresight.

The museum was really, really well done. all the benches had tablets on them that would let you zoom in on items in the room or see a video of how the item could be used. It was a lot more living history to see how people would’ve used things. In one instance there were “table machines.” These were elaborate gear-driven early machine that would drive across the table and shoot arrows or even tiny cannons. A mechanical centerpiece for long, long fancy tables. They never mentioned if anyone was ever hit by the tiny cannons or arrows (I feel like they really needed to say this). One was even a drinking game, it was filled with alcohol and if it stopped in front of you it would be your turn to drink from it. It’s worth a watch on youtube. Here’s the ship that shot tiny cannons. 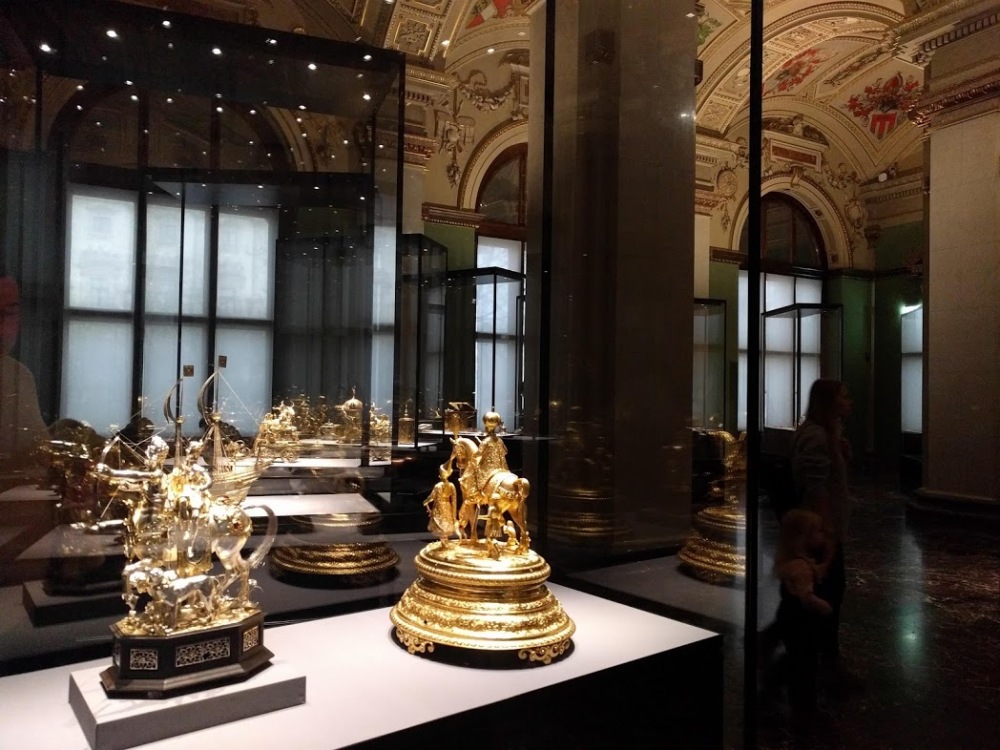 If that’s not enough don’t forget all this unimaginable wealth, and also a massive egyptian and Roman collection are all inside this former palace.

Fancy a drink (we didn’t, line too big) but here’s what the cafe looks like.

Everything in the art history museum was too pretty for words. We loved their benches with interactive tablets to look at things better and we appreciate the Habsburgs a little more for buying and preserving so much of these things.

One thought on “Austria Museums Day 1”