Our trip this past winter brought us to both Vienna and Budapest. While both of these cities were beautiful, interesting, and historically significant, only one of them (spoiler, it’s Hungary) had amazing food.

Seriously though, Vienna was the most disappointing place for food, we didn’t have a single meal (except maybe the Christmas market and the ones we cooked for ourselves) that was anything better than “meh”. They tout Wiener schnitzel as this amazing thing, and we’ve had some amazing schnitzel back in Germany, but somehow every single restaurant we visited messed it up. I think that over the years the restaurateurs have learned that tourists are more than willing to pay 16 Euros for mediocre schnitzel, so long as it’s being consumed in Vienna. And every other dish? Just meh. And don’t forget, in Austria it’s up to the restaurant owner if people can smoke inside or not, and as cigarette obsessed as Austria is that means more than a few restaurants are going to allow it. So while you chow down on your overpriced Viennese food, you also get the pleasure of breathing in Viennese cigarette smoke, just like back in the 1990s!

And the cakes! Don’t even get me started on the cakes (let alone the damned strudel). These cakes are allegedly the best in the world. All this means is that the cafes and restaurants will charge accordingly, and that the best cafes will have 20 minute waits just to get in.

No. If you are going to visit Vienna, we strongly recommend finding an apart-hotel for no other reason than that you’ll be able to cook your own food. You can buy the ingredients for 5 schnitzels, along with pre-made sides (from the deli section), and 5 half-liters of any beer you want, all for less than the cost of a single meal at a restaurant. Or hell, skip the schnitzel altogether, make it when you get back home, it’s not that difficult to shake and bake a pork chop.

But Hungary was the exact opposite. And never mind the fact that what 20 Euros will get you in Vienna, you can get in Budapest for 12 (3990Ft).

I could go on, I really could, but I won’t. Instead of bashing Viennese food (it was probably more the fault of the various restaurants than the entire city’s), I will instead try to promote Hungarian food. I feel like not many people recognize Hungary for the culinary powerhouse that it so clearly is, and I want Hungary to get the credit it deserves.

Pöttyös are a Hungarian candy that is super difficult to find anywhere else, probably because it’s weird as hell. To put it simply, a Pöttyös is a bar of sweetened curdled cream(?) covered in dark chocolate.

They also come in all kinds of flavors, some more “Central European” than others: chestnut, apricot, plum, hazelnut, cherry and poppy-seed, strawberry, and banana.

I tried just about all of them, and I could not pick a favorite. They aren’t as sweet as say…a snickers, but that’s probably why they are so good.

Where to try it: Any grocery store/corner market will have them. They will be in the cooler section, probably next to the yogurt, and can be easily seen due to their polka dot packaging. They only cost about 30 euro cents, and they are worth every penny.

While the idea of sweetened cottage cheese for dessert sounds crazy to us, it’s apparently a pretty common thing in Hungary.

So the next food you should try is a cottage cheese dessert called túrógombóc.

These are more traditional and can only be ordered in restaurants. Basically, túrógombóc are balls of cottage cheese (not at all like you’re thinking) and lemon zest coated with buttery bread crumbs, and then boiled (yes, in that order which makes no sense). The finished túrógombóc are covered with a sweet sour cream sauce (which is amazing) and sprinkled with powdered sugar.

And like the Pottyos, they aren’t super sweet. But if you don’t order them at least once while in Hungary you will seriously be missing out.

Where to try it: We ordered ours from Thököly Restaurant between the Kelti station and Városliget park, but any traditional Hungarian restaurant should have them.

This is the easiest food to find in Hungary, maybe more so than Goulash. 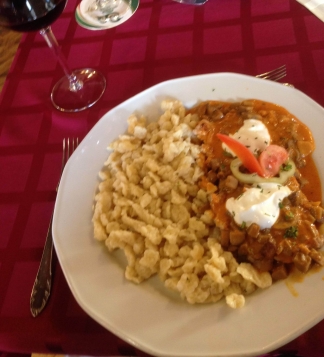 Paprikash can be any kind or cut of meat that has been simmered in a “to-die-for” paprika sauce. It is usually paired with a pile of egg noodles/gnocchi/spaetzle, and drizzled with sour cream.

Where to try it: Because it is so simple and common it’s surprisingly difficult to get really good paprikash. We ordered it from many places, and it was usually only so-so delicious. However, the Paprikash that stood out from the rest, without question, was served at Thököly Restaurant. They offered pork OR chicken Paprikash, so we tried the pork and ended up liking it a whole lot more than the chicken.

The signature dish of Hungary that everyone knows, and it’s usually the first thing people visiting Hungary look for.

Most people assume goulash is a thick beef and paprika stew served with potatoes. However, “goulash” refers to a wide range of stew/ragouts that are mainly flavored with paprika.

There are about ten different NAMED kinds of goulash to my knowledge, all of them served with different levels of thickness, and different combinations of sides, seasonings, and meats.

Seasoning options include thyme, caraway, parsley, juniper berries (try not to get them in your mouth, seriously), spicy paprika, sweet paprika, and bay leaves.

The most common sides are the same egg noodle/gnocchi/spaetzle that you get with paprikash, salty boiled potatoes, or bread dumplings.

Were to try it: Just about any restaurant will serve it in some form or other. If you are reading off on an English menu, they might have translated the word into “ragout”, or “stew”. If you aren’t sure if the thing you want is goulash, cross-reference the hungarian side of the menu and check that the word “gulyás” is in there somewhere. If the menu says “Hungarian Goulash”, then there is a good chance that it’s a tourist restaurant and they are going to serve a simple “crowd pleasing” version of goulash.

Our favorite was served at, Tabáni Gösser Étterem. Their menu had a section titled “Goulash Speciality” with four kinds of goulash to try.

Like goulash, this dish has so many variations it will make your head spin. The simple version is a cabbage leaf stuffed with meat and veggies, simmered in a sauerkraut/paprika sauce, served alongside dumplings or potatoes or egg noodles.

However, the cabbage leaf can be either fresh, soured, or layered like lasagna. The sauce can sometimes be more of a pork stew, and the fillings can be whatever the hell the chef wants, though generally it’s a pork/rice/garlic/pepper meatball. Sometimes bacon gets thrown in there, and sometimes the rice is substituted with some other grain, maybe millet, I have no idea.

Where to try it: Again Thököly Restaurant steals the show. Yes, we ate at other restaurants in Budapest. But this little place, where we were surrounded by elderly locals, was just great. My plate of stuffed cabbage came with a bit of sausage and a small strip of fried pork fat.

Let’s take a detour  from the paprika and stew food category. Picture a decently sized leg of fattened goose, lovingly seasoned with garlic and a bit of basil, the skin is perfectly crackled and layered with such delicious goose fat that you never think for even a second that you need a sauce. That’s Hungarian Goose Leg. Then for sides you have the perfect red cabbage “salad” which has been simmered with apples and red wine for God-knows-how-long, and a pile of mashed potatoes that have been formed into a brick and fried in butter.

Plus the waiter was so happy to see us a second time (because of course we went back a second time) that he gave us a free bowl of white bean soup.

Where to try it: Firkász Kávéház Étterem. Conveniently close to the pinball museum, but far away from just about everything else. Anytime you are surrounded by primarily elderly local people (see Thököly), you know you’ve found a great restaurant.

Similar to Germany, the traditional breakfast in Hungary consists of bread, spread, and cold cuts. There are infinite varieties of this, and no two restaurants will serve it the same way. 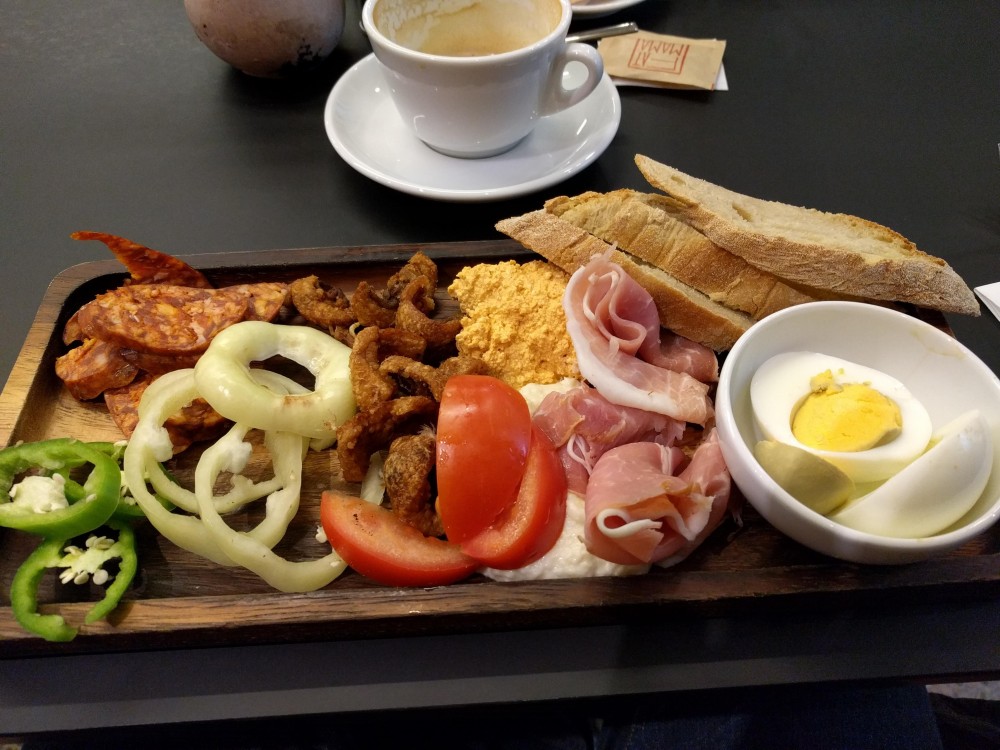 We saw (but didn’t order) another Hungarian breakfast that included just about everything you see above, as well as some scrambled eggs, and a shot of “palinka”-aka Hungarian fruit brandy.

I liked it, and it would probably be very easy to make something similar at home, but it wasn’t the best thing for a cold winter day.

Where to try it: FatMama has the version in the picture above, and Platós has the more extreme version with the Palinka shot. Thought for about the same cost as the Platós breakfast you could get a plate of goose leg, so choose wisely.

From what I saw, there are three main brands of beer in Hungary. Dreher, Soproni, and Borsodi. These three brands have their flagship beers (which are all lagers) as well as countless variations (dark, wheat, pale ale, APA etc) that they brew to appeal to the craft brew aficionados.

Then there is Pécsi Sör, which is a major brewery, but they focus on making premium beers. I tried their brown, wheat, and lager, and enjoyed all of them very much. Actually, I think the Pécsi Sor lager was one of the best lagers I’ve had.

There are also tons of fruity beers that come in tons of different flavors like lemon, citrus, mango, and elderflower, but for some damn reason most of these are alcohol free, which makes them basically weird sodas.

We’ve lived in Germany, and we know all about Ritter Sport and Milka, so we thought we’d seen it all. But two Hungarian companies, Boci and Tibi, proved us wrong. I am struggling to find much information on the internet, and we didn’t take many pictures, but we saw dozens of varieties from both of these brands.

Find them at any supermarket or corner store.

The only thing left to say is… even if you never go to Hungary, if you ever see a Hungarian restaurant in your town, TRY IT! I promise it will be good or, at the very least, interesting.

2 thoughts on “The best food we’ve ever had.”