Many people have asked us about Brexit and we’ve kept our mouths shut until now. We’ve read a lot, watched a lot, talked with people and watched the parliament in action. We’re finally ready to talk about Brexit to our American family and friend readers, as well as talk about how this will affect Mallorca (which sees 3.7 million British tourists every year). But we want to start at the beginning and make sure everyone understands as much as they can.

Pour yourself your favorite tea or beer and deep dive into this:

What is the EU?

The EU is the “European Union” a group of 28 countries who agree – on some or all levels:

Much of the money sent to the EU ends up back into the original country through funding and programs. It depends on what your country needs. The rest of the money goes to EU based projects that no one single country could fund by themselves (space programs, border crossing technology, research programs, and major humanitarian aid). You’re paying into the EU to help the EU work (employees need payment) and to get the benefits of being in the EU (see above).

The EU putting money back into your country (through programs) doesn’t mean the country doesn’t tax their own people and fund their own things. For example the taxes from the Balearic Islands subsidized my students’ laptops. But the computers the teachers use were funded by the EU (and have EU stickers on them) but when the playground needs repaving that will come as a grant from Spain. Local taxes, state (country) taxes and EU taxes all work together to get everything everyone needs. We saw more EU flags on road work and computers in Andalusia because they needed a lot of help – more than Spain could afford so the EU stepped in.

10 countries (out of 28) spend more than they get back. Germany, France, and the UK are the three top biggest spenders who don’t see as much as they contribute. But they have worked to cap some fees to make it more fair on them.

The UK also negotiated a “rebate.” As an example in 2017 the UK was due to owe £18.6 billion to the EU. But they got their instant “rebate” of £5.6 billion. So they only sent the EU £12.4 billion. Then the EU spent around £4 billion on the UK. So after everything they contributed £8.4 billion to the EU that they never saw again.

What about the other countries?

Plenty of countries in/near Europe (Ukraine, Norway, Switzerland, Turkey, etc) are not in the EU but they play nice with the EU. This is important because the UK looked at these countries when deciding to leave the EU.

Norway, Iceland and Liechtenstein are not in the EU but they are in the “European Economic Area” which means free movement of labor, goods, services and capital with the EU. So an EU-member German citizen could go live and work in Norway even though Norway isn’t in the EU. And a Norwegian business could do business with Germany without things getting muddled up with taxes and regulations.

Switzerland, while surrounded on all sides by the EU is not part of the EU or the Economic Area. They are, however in over 100 agreements with the EU including giving up their regulatory autonomy to make trade easier.

Other countries around the EU have agreed to let the EU’s European Court of Justice (and Europol) have jurisdiction over them. And/or they agree to give up their own trade policies so they can work with the EU. So they aren’t part of the EU but they are willing to give up a couple things to play nice with the massive trading power of the EU.

Finally there’s Canada. Canada!? Yes, they are not in the EU (obviously) but they worked really hard over many years to negotiate some really good trade deals with the EU.

Again, this is important because the UK has been looking at all of these countries when they were deciding how they wanted their EU relationship to go.

Far over 3 years ago the idea of Brexit was discussed but only 3 years ago did it get serious attention and momentum. The main arguments to leave the EU were in regards to taxation, over regulation, and immigration.

“If one big government (the UK) is bad, try living under two big governments (the EU and the UK). Double taxation, double rules, double bullshit” (So they said). The people campaigning to leave aptly called “leavers” said a lot of things that sounded great but ended up being exaggerations.

They claimed there were over 109 EU regulations in a pillow but really they just opened up the EU’s legal database and counted the number of times the word “pillow” was used (109 times) and then said there were that many rules. Just because the word “house” appears 55 times in the US Constitution doesn’t mean it has 55 laws about homeowners.

On the flip side the UK was concerned about real regulations that did affect them (as well as everyone else in the EU, they weren’t being targeted). The EU put a ban the import or manufacture of vacuum cleaners which exceeded 1,600 watts in power. The UK flipped out saying that this wasn’t okay and vacuum cleaners wouldn’t have the suction power needed to clean. Many people saw this as the EU interfering in their lives too much when really the EU was asking manufacturers to make a better, greener vacuum (which they have now). Other countries didn’t have problems with this because the EU agreed mutually, the UK isn’t being told what to do, they have a representative who works with the EU.

The EU also wanted to change how meat and fat would be labeled on meat packaging. The leavers flipped out and said this would ban the traditional British sausage and argued it was an attack on their culture.

We said earlier they’re one of the top three contributes to the EU. Still some facts were exaggerated. A bus said “We send the EU 350 million pounds a week/let’s fund our National Health Services instead (vote leave)” 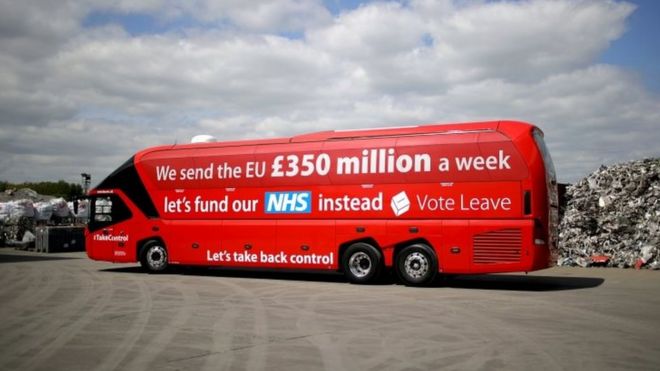 This figure is great but like I said earlier, they get some money back to fund projects, people, etc. So they sent £350 million but in reality after their “rebate” and how much the EU puts back into the UK it was closer to £250. This is still a lot of money but they’re ignoring that that’s not how budget works. You can’t just take all that money and give it to something else. The reality is all that money will be divided into a lot of things (including things they didn’t used to pay for because the EU was paying for it). So the promise to put all that money into their NHS (health services) will now mostly come from (drum roll) increased taxes.

Also we now know Brexit will destroy their economy. Their GDP is estimated to be 3.9% lower by 2030. Then their divorce-cost to pay the EU will cost £1,090 per person. So the loss of money and fees to the EU (they wanted to leave to avoid fees, remember) will cost £100 billion a year by 2030.

So by 2030 they will have lost an estimated 1.1 Trillion while their bus said they would’ve saved 200 billion (in the 572 weeks until 2030). Not only are they losing a whole bunch of money, they are still just going to have to raise taxes to pay for the buses promises.

In short, Turkey has been asking to join the EU since 1999 and the EU has never let them (and likely never will). Politicians skirted the sides of racism by saying if Turkey became an EU member every Turkish citizen would immediately flock to the UK. Taking all their jobs and raising crime rates. The politicians exaggerated saying that Turkey and other presumably bad countries were going to join the EU within 4 years (no one has ever said 4 years, they made this up) and it would lead to 5.2 million people moving to the UK.

When they told people that the over regulation, money, and immigration would be worth leaving people got excited. They made promises that it would be simple to leave. A man named Liam Fox said a free trade deal with the EU would be the “easiest in human history” after Brexit. Well they turned out to be so difficult that 3 years later (with 2 days left) there still isn’t a deal.

They said that leaving would be easy because the EU “needs us more than we need them”. They said they would have more leverage and the EU would be dying to meet their demands. This was partially because of the money (third biggest contributor) and partially because claims were made that 66% of manufacturing jobs in the UK were on demand by the EU. Aka the EU needed the UK’s manufacturing work so badly that the EU would do anything in negotiations. That number, we now know, is closer to 15%. The EU doesn’t exactly need their money or their workforce.

They are a representative democracy so they elect people to make decisions for them. They never should’ve been given the opportunity to vote on it because it’s not how things work. They don’t even elect their own leader, why are they voting for critical issues. They also were given a vote to “stay or leave”. There was no other information about how this would be done (time frame, money, etc). Our ballots are usually filled with “Shall there be a XYZ that is funded by a cap of XYZ this much per year by such and such year.”

Some citizens admit that they weren’t qualified or educated enough to make the decision. Some people made the decision at the last second and others voted as a protest. The Guardian summarizes it these people best

Younger relatives complained of eastern European migrants costing them work, while [grandma], who had lived through the second world war, felt that the EU had guaranteed peace in Europe … In the voting booth, Shaw finally made her choice: she voted leave. “To be quite frank, I did not believe it would happen,” she says. “I thought I’d put in a protest vote. The impact of my stupidity!”

So they voted to leave the EU. No, this isn’t accurate. They voted to “invoke Article 50”. Article 50 is a clause in the European Union’s Lisbon Treaty which says you can leave the EU if you want. It lays out the rules to leaving saying it has to

This was 2 and a half years ago. The date to leave is looming (2 days) and nothing is decided (why in the next post).