As you can see this city has two names, Derry and Londonderry. Which is correct depends on who you ask. The old Irish name for the city was Doire, which has been anglicized into Derry, and means “oak grove”. Then in the 1600s the city was given over to a bunch of guilds from London for development and the new Londoner overlords added London to the name. In the 1980s, and again in 2015, the residents and the city council voted to drop the “London”. To spare my fingers, and in accordance with the wishes of the residents of the city, I’m just going to be typing “Derry”.

Most people associate Derry with The Troubles. It was pretty much where The Troubles began in 1969, and throughout the next 30 years the city witnessed riots, battles, murders and the infamous Bloody Sunday massacre.

But, as silly as it sounds, we went mostly because of a TV show.

This TV show is called “Derry Girls” – it follows a group of teens growing up in the volatile city of Derry during the “troubles” in the 1990s. It seemed like a dumb teen comedy at first but it’s really not – its very funny, heartwarming and cute. It’s also increasing tourism to Derry quite a bit, if for no other reason than nobody had heard about Derry before the show.

So we planned this part of our trip as a cute, spontaneous visit to a lesser known city that has a long, interesting, and sometimes tragic history. We wouldn’t have gone out of our way to come here just because of a TV show, but we needed somewhere between the Causeway and Dublin to sleep, and it looked cool, so why not?

2 days before we were due to arrive in Derry something terrible happened. Police there had searched some homes which triggered a riot and caused general upset. Although the IRA has been gone for ages the “New IRA” (generally regarded as a bunch of troublemaking youth/gangster wannabes) still exists. Somebody took a gun and fired it towards the police hitting a journalist named Lyra McKee who had been standing next to a police vehicle. She died of her injuries a little later. This is huge because no one has died from the “troubles” since 2002.

We were NOT in L’Derry when this happened. We were briefly nervous when we first saw the news that there might be rioting or some other “retaliation” against the New IRA, but instead the people of Derry reacted with calm unity. The city was more shocked that this had happened, especially since gun violence is so rare on the island.

But Derry is absolutely worth visiting, so here what you can do with 24hrs in Derry.

Since our time was limited we only managed to visit one museum, the Tower Museum. In this museum you can learn about the history of Derry, how it was colonized by the British, and how it withstood a 100+ day siege back in 1688. They also had an exhibit on a Spanish Armada shipwreck that was discovered recently. This was an A+ museum.

Experience the walls of Derry.

In most European cities, you just get to see the remains of old city walls. They are usually never worth going out of your way to see. But Derry is different.

Derry is sometimes referred to as the last walled city in Europe. Just about every European city had a wall around it back in the day, but most of them tore their walls down to make way for roads and buildings. For some reason, Derry has managed to keep their walls almost totally intact. They seperate the main commercial district from the residential neighborhoods and contain many restaurants, bars, banks, and two shopping centers. Even the original gates are still in use, though cars have to go single file to get through them. You can walk the entire length of the walls (about a miles worth), to get some impressive views of the city.

Learn about The Troubles.

Derry has historically been split down the middle between Catholic and Protestant residents. The narrow majority supported remaining a part of the UK, but the growing minority did not.  So it’s no wonder why this city saw so much violence during The Troubles.

Evidence of the political division can be seen in the murals and posters painted/hung all over the city, and also the memorial to “Bloody Sunday” which is built near the site of the massacre that happened back in 1972. 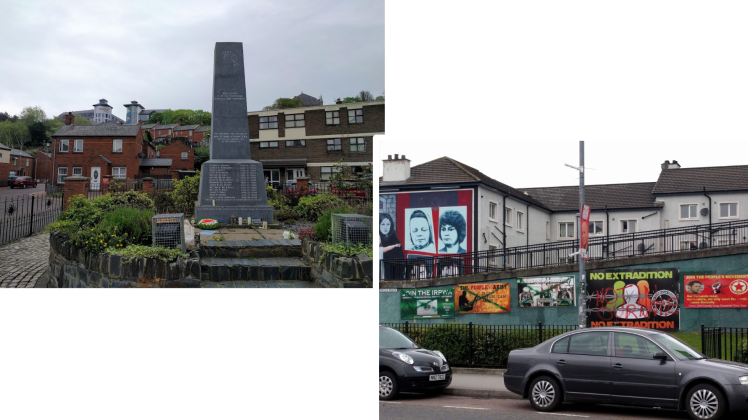 Then, just across the street from that memorial, you can see the “Free Derry Corner”, which indicates that you are now entering the “self declared autonomous nationalist” district of Derry. When we saw i, a message had been added “Not in Our Name”, in reference to the murder of the journalist just two days prior. 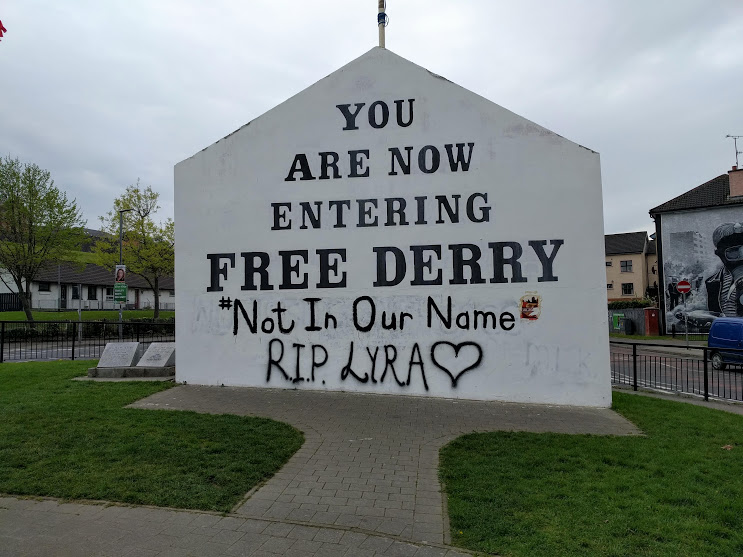 What else did we do?

The best part of Derry is how a”normal” it is. Derry is not a big cosmopolitan city like Belfast, nor is it a touristy hellhole like Dublin (more on that later). It’s basically a big village, so we did what the locals were doing.

First, we went to a pub and ordered some beers. In Belfast, a pint had cost £5 (that’s $6.50). In Derry that same pint only cost £3.40 ($4.40), that’s a big difference. Then we went to a chippy. A chippy is a kind of restaurant that consists of a counter behind which are rows of deep fryers and griddles. You can get many things at chippys, as long as it’s fried and either comes with chips or goes on chips (french fries). We were overwhelmed with the menu, so Kaeti made the great decision to ask the teen behind the counter what his favorite thing was, to which he instantly replied “the chicken box”. Before he had even finished, Kaeti just went ahead and said “one of those please”. “Do you even want to know what it is first?”, he asked “No, but go ahead?”. He then proceeded to list off a ton of things in his thick ass Derry accent that barely made sense. I remember hearing chicken, sauce, and chips. I don’t think Kaeti understood anything he said, so she was extra surprised. Meanwhile, Chris just got a burger.

Don’t feel too bad for Chris though, the burger ended up being amazing. It was the kind of burger you get from someone’s backyard, super fresh and super simple. But then there was the chicken box. It. Was. Fantastic. It ended up being a pile of chips with shredded chicken, taco sauce, tzatziki (maybe), thousand island (maybe) and cheese.

The whole meal only cost us £10, so we headed back to the same quiet pub and had a few more pints.

And was was painted on the side of that pub?

The characters from the show that brought us here, Derry Girls.

You probably don’t need more than a full day to see Derry, but if you do you won’t be disappointed. Between all the restaurants, walls, museums, and quirky shops you’ll definitely find something fun.