Tostada is toast. But it is so much more than toast. It’s a really good baguette toasted and served something delicious upon it. Every adult in Spain eats one at 11:30 and half the restaurants have punch cards buy-5-tostadas-get-one-free kind of deals. 1 is super cheap, you can get tostada and a coffee for 2.60 sometimes. Or even with an orange juice. You can even buy tostadas in the Dunkin Donuts in Spain. 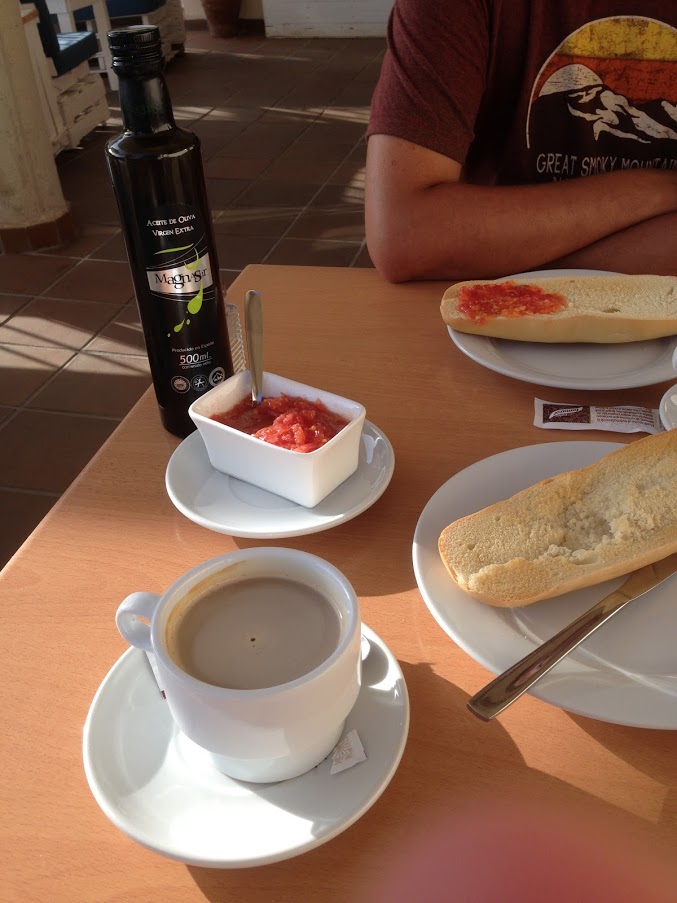 We’ve seen all kind of things on tostada, from jamon to goat cheese. But it seems like most of the complicated tostadas are marketed to the “gotta-cram-as-much-Spanish-authenticity-in-as-little-time-as-possible” tourists. Once in Mallorca we ordered “pa amb oli” (the Catalan word for “tostada”), and then winced when the waitress brought out two massive plates heaped with bread, jamon and Manchego cheese. First of all, Manchego cheese is from the Madrid area (not Mallorca), and second of all it cost us like 9 Euros a plate. We ate it and it was delicious, but we both assume that the only reason she brought us the meat and cheese version was because we were foreign. None of the locals got meat and cheese, and they all ordered “pa amb oli”.

So what is “real” tostada? Like if you sat down at a restaurant and ordered a tostada they would almost certainly bring: bread, olive oil, tomato, and salt. Nothing more, nothing less. And the first time we tried “real” tostada….. we thought it was B.S. “wow, cool. Bread and juicy tomato ….fun”. At least the complicated version somewhat resembles a sandwich.

But the simple tostada is basically the ONLY thing available at many cafes in the morning. So, when we’d go out for breakfast in Spain, we had to eat tostada.

And it took us nearly an entire year to actually learn to like it.

So what was our problem?

First we had to deprogram our American idea of what breakfast should be. In the USA breakfast is this huge complex thing that lasts all the way to lunch. We’re also quite partial to a British breakfast now and again so it’s a lot to go from beans, eggs, sausage, bacon, toast, tea, tomato slices, mushrooms, etcetra to a piece of bread. With watery tomato and oil on it.

Spain obviously doesn’t think breakfast should last all day. Breakfast should be small, fast, and as simple as humanly possible. It’s not expected to last you until lunch. It’s meant to be a mid-morning snack and a chance to relax, not stuff yourself. Tostada fits this roll perfectly. It’s both a light breakfast and a thing to eat between larger meals (and sometimes even as a side dish on hot summer nights). It fills the gap. So if you walk by a cafe at any random time of day when the rest of Spain is working or sleeping, I can guarantee you you’ll see at least one old man eating a tostada.

You can’t just slap a tomato on bread or blend a tomato up. Also don’t just open a can of tomato paste/sauce/anything and slap that on some Wonderbread. You have to grate the tomato and use some good bread.

This is really quite easy to make. You slap the bread in the oven to toast while you grate the tomatoes and the coffee brews in the background. Everything comes out at once.

This isn’t really a recipe, more of a “how to”. And the only thing that requires any effort is the tomato.

Put water on to boil. Cut your bread down the middle, and start toasting it. Depending on the size you might need to use the broiler in your oven.

For the tomato you need to make tomate rallado, AKA “grated tomato”.

To grate a tomato, first remove the skin. To do this you need to shock it. Boil it for about 20 seconds, then dunk it into cold water. Some tomatoes are easy to shock, others require a few rounds. Summertime (in season) tomatoes are usually better.

Once the tomato has been shocked, the skin should peel off very easily.

Peel it, and discard the peel. Then grate the whole thing using the smaller grate option. You really are grating the whole thing (seeds, internal stem, everything) into a bowl. Drizzle on some olive oil. This is no different than putting butter on bread. It seems weird at first to just put oil on bread but it’s necessary.

Add as much tomato as you want (if you love tomato then put a bunch on, if you aren’t partial to tomato try a thinner layer at first. I hate raw tomatoes but I love tostada so just dial in where your tomato tolerance is)

Then a dash of salt.

Serve with orange juice AND coffee, (preferably a shot of espresso with or without milk).

One thought on “Recipe: Tostada”