Because of the lack of internet this was originally written on Sunday, September 23nd,  and posted October 10th.

Apartment hunting was a whirlwind adventure around the city on our first day in Martos. We really didn’t have any time to tour our new hometown, er, home pueblo. As exhausted as we still are from the jet lag we ended up walking 6 miles around the city and staying out until 3 am.

We woke up at noon which was terrible. We finally got to sleep at 2 am (this would be 6pm in Colorado) then got up at noon. We didn’t even hit the streets until 2 pm after lunch/breakfast. We keep wrecking our recovery efforts by sleeping through alarms.

We headed for the castle first. In just about every street in Martos you can see La Peña mountain or the castle/church that absolutely loom over the city. 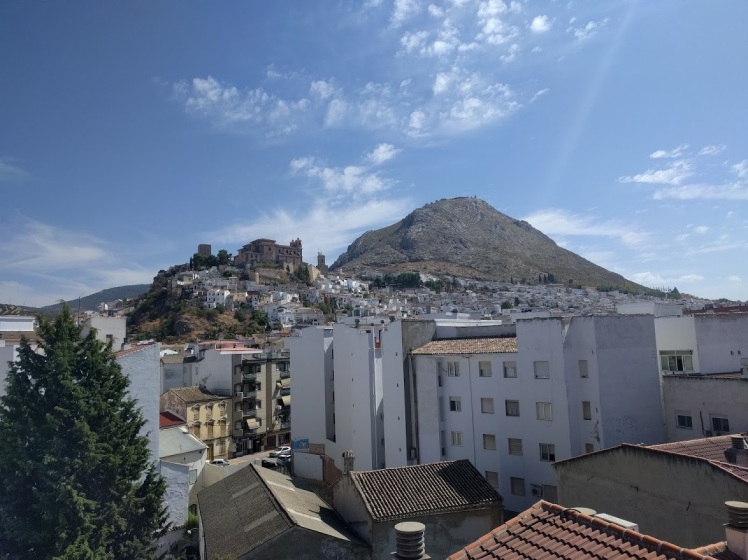 So the top is an obvious place to start exploring. The hill was a beast to walk up. We passed some poor dad who was struggling to push an old style metal stroller straight up the hill with a screaming baby inside.

Whole families were hiking up this hill with their groceries or children. It’s a medieval city so there are tons of homes around the castle. This makes for cheap housing now because some apartments are literally crumbling (because they’re older than the United States).

At the top we found tons of churches we didn’t even know were there. The main, huge church is towering above and over everything but there are maybe 3 others in this tiny little space on top of the mountain.

We don’t have very good pictures of them but you can see part of one here. The apartments are built right up against anything – even a church. There just isn’t extra space to justify having a garden or something.

On that note even the ancient castle (built around 1074-1079) doesn’t need extra space. Apartments are built right up against it and around its nooks and crannies.

This castle is called Castillo de la Villa de Martos or “The Castle of the Village of Martos.” It has a friend castle on La Peña aptly named “Castillo de La Peña.” In the right light and in the right angles you can see it.

Martos the city has been around since the Roman times. It just didn’t need a castle during those times. When Spain (Catholics) and the Moors (Muslims) realized their religions were just not going to work out for each other anymore, they went to war. Spain started building more castles than you can shake a stick at. These were to defend against the Moors and gain more land until the Moors got kicked out of their land (what is now southern Spain). So the Castillo de La Villa was built for this purpose (to protect and occupy) maybe in 1074-1079. We’re not sure, and with a castle it does take a while to build.

To put this time in perspective, the USA was in full Anasazi and ancient people mode during this time (1070s). In fact Chaco Canyon was booming and Pueblo Bonito had 800 rooms.

Martos’ castle was specifically built to defend against the “Kingdom of Granada” – in 1482, a ten year war started in Andalucia (Muslims vs Christians obviously, still). There were several attempts to take over Martos’ castle (it has a good defensive position for the whole area) but it never worked and the Catholic Spaniards later won the war (obviously) and took all the land (obviously).

There’s a legend of a Doña Mencia de Haro (a badass lady married to an aristocratic guy, whatever his name is) who may or may not have dressed herself and her ladies-in-waiting in armor and armed them. They stood at the edge of the castle to appear as a group of soldiers to scare away approaching Moors (who had heard correctly that the castle was unprotected).

Here’s a super cool cut out of Doña Mencia de Haro and her man. With our faces.

We could’ve gone into the castle but it was siesta – it had been open all morning but closed for siesta from 2-6, then it would reopen until 9. Because we got going so late we had gone out right when everyone else was retreating in. Their siesta is our fiesta so we had almost everything to ourselves. The streets were dead quiet the whole time we were exploring.

We’ll go in another time. For now we moved over to the church we could see the whole city. We’re just going to spam with pictures here:

The whole city doesn’t fit in a single frame. We were surprised how big it is. It’s just completely packed with apartments. It also puts it into perspective how crazy it was that there were only 4 apartments available for us to look at. We’ve only seen a couple more with sale/rent signs on them. There is a huge plastics factory that snatches up apartments as fast as they are unoccupied. So the city really is this packed with people.

It was 3 and while we had just had breakfast/lunch we were starving. Jet lag is a strange thing. Since it was siesta almost everything was closed, including a couple grocery stores, we had no choice but to go to a restaurant. There’s this silly and brilliant restaurant called Vida Park where there is an indoor kids play place in the back. Adults have access to a full bar, food or just tapas. Their kids play supervised in the back while they drink and relax. So this is like a high end McDonalds with a play place. We have no kids but we had gotten a beer from there the night before and the waitress was nice/patient with us (probably because of all the kids she deals with). So we felt it was a safe place for us to make mistakes in Spanish.

There’s a fantastic thing called the “menu of the day” where you have set options for a first and second course then you get a drink, dessert, and bread with it – all for 9.50. 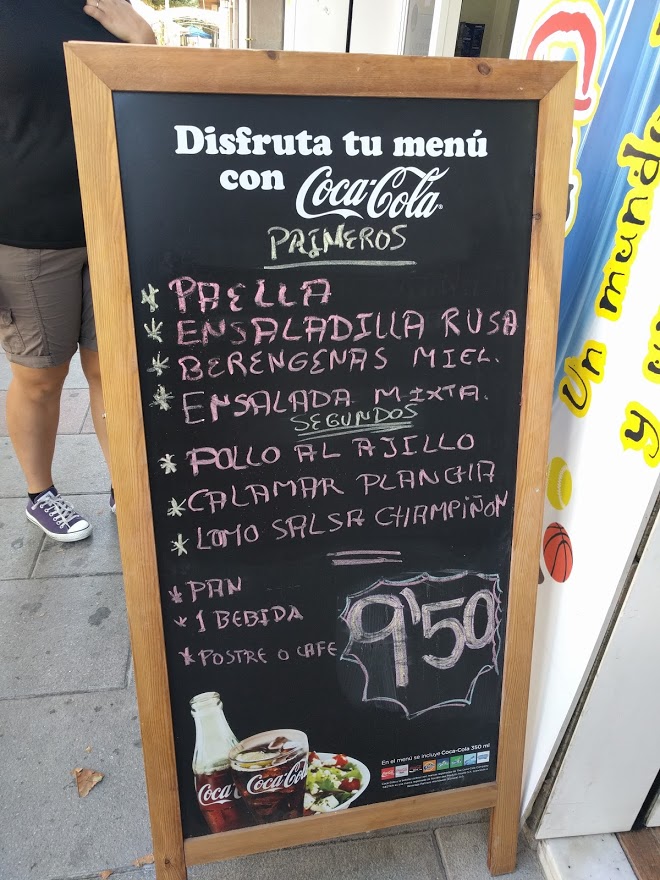 For the first course you could choose from paella (rice dish), Russian salad (potato salad), “Berengenas miel” which we didn’t know what that was yet, or mixed salad.

The second course options were chicken with an oil garlic sauce, grilled squid, or pork with a mushroom sauce.

Then we had bread, one drink (any, alcoholic or non) and a choice of a dessert or a coffee.

I wanted the Russian salad but because of the language accidentally got the mixed salad. It had tuna and corn on a bed of iceberg lettuce. It was the best thing ever. Chris ordered the berengenas miel because we didn’t know what that was and wanted to learn first-hand. It’s breaded french-fried size strips of eggplant with a fantastic balsamic vinegar sauce over it. For both of us it was some of the best food we had ever eaten (in this silly little restaurant with children shouting in the back).

The waiter brought our second course out and we finally thought to take a picture.

Amazing. Top 5 food we have ever eaten.

We chose a coffee not a dessert because there were dessert options and didn’t want the waiter to verbally list them out and us not have a clue what he said. We understand Spanish pretty good but holy heck the Andalusian accent is insane. “Hablas mas despacio” isn’t going to help.  As an example “Tres heilos, adios” (three ice, goodbye. Yeah, just an example here) would sound like “Tray, yellow, audio.” That’s why apartment hunting was so difficult – we can’t their accent and they don’t seem to be able to understand ours.

After lunch we walked a few more miles around the back of the city where our schools will be. We saw the city park, the old bullfighting ring (retired), a wedding venue (with red carpets and bouncers), and a couple new supermarkets we hadn’t gone into yet. It was fantastic.

The city shut down even more and it was dead silent besides a couple cars. Not a single person for over a mile – and we were walking right downtown. Gotta love siesta.

We got food for Sunday (stores will be closed) and then took a small break, it was only 5 and we had managed to walk all over the whole city and see so much. As tired as we were, we headed out to see the The Via Verde del Acietes. This is an old retired railway line (or bikes or walking) that goes 74 miles from Jaen to Puente Gentil. It goes right through the “acietes” the olive groves.

There are tons of old bridges to go over and under. Not to mention how tranquil the groves are. Rabbits and birds (and maybe some snakes) were the only things moving. It was wonderful. We’re so happy to have this space only 5 minutes from our apartment. We love to take walks and this should be a great way for us to explore nearby cities (Torredonjimeno and Torre del Campo, maybe even Jaen by bike).

The sun was going down and we headed back for the night. Or so we thought. Our Airbnb host’s friend came over. He doesn’t speak any English so after a few glasses of tinto de verano we were ready to practice some Spanish with him. He’s very friendly and he speaks slowly and tries to enunciate. So the wine flowed for a while before our host suggested we go to a bar. At 12:30 in the morning. Up for new adventures, we went.

No one was there even though it was past midnight. We were literally the first people in. We got some drinks and kept visiting. A wedding party arrived and it started filling up. By 2 you couldn’t even move it was so packed. 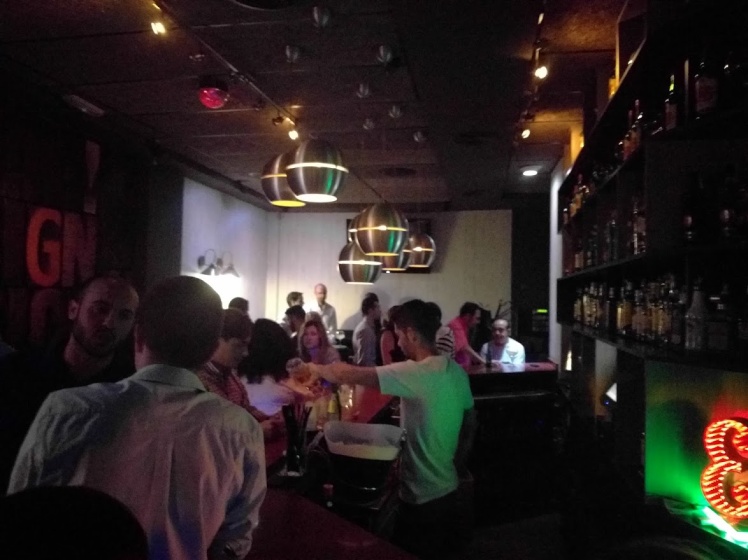 Us going to a bar is new. We’ve actually never gone to a bar besides getting a couple beers in the middle of the day in Kansas. And, of course, Falcomburgs in Durango but it’s more of a restaurant. This bar was posh and people were even dancing. We’ve never ever done anything like this but enjoyed it. At 3 am we all stumbled home.

It was the perfect day. Great food, great people, good drinks, fantastic adventures. The city seems like a good fit. We’ve already got an apartment and don’t have to worry about too much more besides simple things.