Because of the lack of internet this was originally written on Tuesday, September 26th, and posted October 10th.

We were scheduled to meet Rosa (the real estate agent) at 11 am on Tuesday. At 10:30 she called wondering what was happening. She wasn’t wondering where we were, she just hadn’t written down her own schedule and was asking us what the plan was. It’s pretty down-to-earth here.

In the last post I talked about how nice they were about the language barrier. Rosa had either been losing her patience or was just putting on a show. About as soon as we weren’t looking for apartments anymore (as in she had us in the bag and was going to sign us) she became a little rude. Talking to Lee (who’s lived in Spain for 20 years and speaks Spanish perfectly) she would say “this one doesn’t even understand me” about Chris. She couldn’t even use a pronoun or his name, just “this one.”

When we sat down with the landlord, Rosa told her “oh well, these two don’t understand anything.”

“We understand a little” we corrected her. Jeezo. The landlord, who is a PE teacher, turned to us and said in English “I taught at your (Chris’s) school… 7 years before.” Ha! So our landlord speaks a bit of English.

Spanish contracts have to be signed or at least initialed on every page. So in the 8-10 page contract every party needed to make a mark on it. It took a little while for the 4 of us to pass around 2 different contracts and make a mark on all of the the pages. We, of course, didn’t read it (because we can’t, it’s in legal Spanish terms). We were assured it’s a typical contract and Lee, who was supervising, said it was good to go. Some people don’t even do a contract and just pay under the table to avoid taxes. So at least we had a contract, I guess.

After signing the contract we had to transfer all the utilities into our name. Our landlord offered to just keep the water in her name. It’s easier because we don’t have a Spanish bank account yet. So every three months she’ll show us how much we owe and we’ll wire her the money. As for the other bills (electricity, and such) we’re not sure. We’re supposed to give our future-but-as-yet-non-existent bank account number to Rosa for … these other bills?? Later. We’re not clear.

The landlord and Rosa handed the keys over and we were given our copy of the contract. It was basically done. We had our apartment not a week after we got here. We had been nervous about not having one for months or having to go live in a different city.

The PE teacher/landlord walked us to the apartment to show us how to do things. There were some extra linens (from the 1970s) if we wanted them. She showed us how to turn things on and off and just showed us general things. Turns out the dishwasher we had been so impressed with didn’t work. It had never been used and was broken because of this. Oh well.

Afterwards we moved out of our Airbnb and said “see you sometime” to our host, Lee, who only lives a few blocks away. We’ll be seeing him around for beers and such in the future, I’m sure.

We headed to a “Chino” or “China Bazzar” (more like bizarre) a dollar store run by Chinese people (usually) which has about everything in the world for a cheap price. Some of it is slightly defective (in appearance) or strange but it all works. Name something and you can probably find it in large quantities in a Chino. An entire box of hatchets, six different kinds of shower heads, 15 different kinds and colors of trash cans. There are kitchen things, shoes, bras, cleaning solutions, makeup, sports equipment, electronics. There’s “Cleven Kleen” (Calvin Klein) knockoff brands, there’s “Toldeo Jones” Indiana Jones Themed porn DVDs in a bucket over by construction equipment. Yes there is a construction section with  small bags of concrete and caution signs.They literally have everything.

Since we’re not making money right now we knew we needed to get some stuff from the Chinos. Our apartment is furnished but there are some glaring things missing – trash cans, a cutting board, clothes hangers, cleaning supplies (not using a second hand mop, yuck!), etc.

We headed to a new China Bazaar which is all the rage. We spent maybe $60 in cleaning supplies and basics then headed back to the apartment to begin the cleaning festival. Everything had been consistently dusted for real estate appearances but the floors were dirty, half of the dishes weren’t really washed and the showers and toilets hadn’t been cleaned in a while. An old calendar on the wall showed November 2016. Maybe this is how long it had been unoccupied? (Update: We have been informed the last family moved out just over a month ago. Just lazy, maybe).

The walls have a lot more holes than we initially noticed. Also there are some intense Saints and the Mother and Child watching over the main bedroom. They live in the closet now (for safe keep). In the pantry we saw a tiny corner of a paper hanging over the edge of a high shelf. Ooo, secret paper. We took it down – surprise Jesus! He watched and and still watches over everything from the top of the pantry.  We agree this is the safest place for him so there he remains. Watching over things. 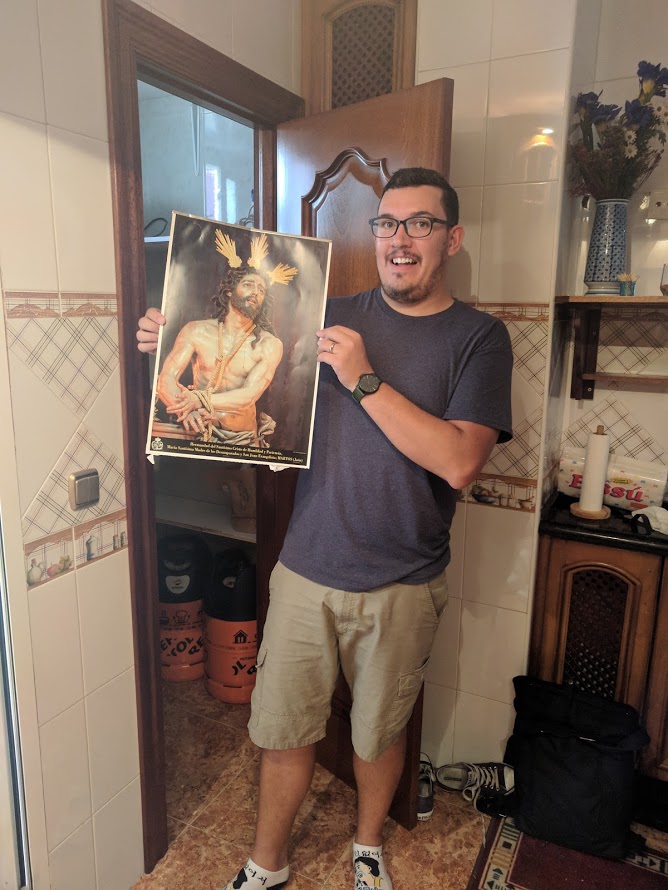 Cleaning took the whole day. We made a couple mistakes with cleaning supplies including a near miss with bleach which we thought was fabric softener (ahhh!). We put a ton of effort into cleaning the fridge and freezer out so we could at least get some groceries. The whole back of the fridge is too cold and bits of vegetables and alarmingly a bunch of newspaper was completely frozen to the back of it. Maybe butchers or fish mongers wrap stuff up in newspaper or maybe the last people were just crazy. So we had to boil water to get that off, no amount of chipping or turning the fridge off gave us any success.

We got groceries, unpacked, then went in and out all day. We adventured through all 3 China Bazaars in town and went to 4/6 of the grocery stores here. Everything shut down for siesta and we didn’t have any sheets, pillows or a comforter (besides an insanely nasty dust cover on the bed). We would either be sleeping in clothes on a bare mattress or we really had to hit the streets at 6pm when everything re-opened.

Shopping for sheets and pillows turned out to be more difficult than getting an apartment. It was crazy how things are measured. There are about 3 different default sizes for pillows (not like throw pillows but sleeping pillows come in 3 main sizes).

Also our bed measured 135 by 185cm but the sheets sizes came in 90, 120, 150 etc. Nothing matched any of our dimensions and we couldn’t figure out how these numbers existed. Were they something like an average of the length and width? We had been told our bed size was “matrimonio” (married size, ha!) but none of the sheets had names (like king, queen, married) only these random numbers.

After 30 minutes in a small bedding store we bought the biggest size, 190, of a fitted sheet. We figured that it was somewhat close to our 185 measurement. We wanted to buy a whole set (heck, we need one and wanted to sleep in a few hours) but we planned to buy just the one as a sacrificial experiment. 190 ended up being for a much bigger bed (go figure, since we had 185) but the excess can just be tucked in.

It was now getting dark and we didn’t have a comforter, sheets or even pillows. Also we didn’t have towels and needed a shower after cleaning and walking around in the hot sun all day. The Chinos all had terrible pillows which we had to just settle for at 9 pm. Then we got large-ish but sad towels from an imported grocery store, Carre Four. Finally we got a little fleece blanket (the kind you keep in a living room in case someone gets chilly) as our new comforter. It’s still basically summer here until February so it doesn’t matter much. Sheets are right out.

We crashed into bed. Nothing was unpacked and most everything was still in need of more cleaning. Still we had done an unreal amount of things for one day and finally a place of our own.