Saturday was great, we had a nice time exploring the Via Verde in a different direction than we usually go.

We saw the old train station that used to serve what is now the walking path. There’s also a large train-repair warehouse. They’re abandoned, of course.

We also saw a bunch of almonds, walnuts, Mormon tea, and of course, olives.

On the way back we got a great view of La Piña. We’ve walked almost 4 miles away from Martos from all directions and have always been able to see La Piña.

Still it was an exhausting, dusty walk in the high nineties. We needed a shower badly. When we got home I was mid shower, hair full of conditioner and legs soapy from shaving when the hot water ran out. Completely. Yeah it felt okay after the hot sunny walk. But then it just got colder and colder, like ice water. Occasionally it would give a little death cough and get burning hot, so it quickly became a hell shower.

The bombona (propane tank) had run out of gas and couldn’t heat up water anymore. I stood in the shower wondering what the best course of action was for 10 minutes while Chris changed it with another one, then back to the original one. We have three bombona cans but none had any gas.

So we didn’t have any hot water. That was annoying but not terribly so. What was crappy was that we wouldn’t be able to get a new bombona until Tuesday. If you order one in our area you’ll get it the next day. It was Saturday night, no one was open, no one would be open on Sunday, so the earliest we could ask for it was Monday. The earliest we would probably get it was Tuesday.

I had my first day of school on Monday so we planned to spend Sunday indoors, not getting sweaty so I wouldn’t have to take an ice shower or boil water for a bath before school.

Sunday started badly with our storm shutter completely shattering. All of the windows have heavy blackout/storm shutters that roll up and down outside of the window. One of the plastic-y bits at the top shattered and now the whole thing listed dangerously sideways. It’s stuck shut so we now live in partial darkness (it’s a blackout curtain). This is out of our hands to fix since what broke is a piece of plastic that supports the rest of it  – we can’t just glue something back together. We don’t even know how to access it – do you need a crane or to go outside, can you pop something out from the inside? It’s not our fault either, our landlord is supposed to fix this stuff. So we’ll need to call her and risk her raising our rent if it’s an expensive fix.

After breakfast we both realized we had put over 12 hours of work (over the course of 2 weeks) into our introduction powerpoints only to have them be trapped on our computers. We don’t have Microsoft Office, we have Google Docs/Google Slides saved offline. So we can’t just open it on another computer (no internet) and we can’t save it on a USB (to bring it to school) without the internet either. They were completely trapped on the computer.

With less than 24 hours before I was expected to do this lesson we couldn’t get access to it. We tried to get the free city-wide internet but couldn’t access it for some reason. We stood outside of a friend’s apartment to try to steal his internet.We asked this friend if we could come inside for the internet, but he was out of town. It’s Sunday and siesta, so no cafes were open.

Our only option was to use most of our data to download it. Neither of us wanted to do this since we won’t be getting internet for a few weeks and need the data to look up words, get bus tickets and contact co-workers.

The longer we worked on the trapped problem the more I thought this was maybe a saving grace. I didn’t know anything about these elementary school kids. My visit to school had made them seem like they wouldn’t understand a single word. It seemed I would be working with teachers who didn’t speak English so if no one spoke English but me what was the point of showing a powerpoint or even doing anything? If it was trapped on the computer maybe I could just observe the first day and see how bad it really is – then fix the problem for the second day. Seemed reasonable enough so we texted my coordinator to ask if I could just observe for the first day.

While we were waiting for him to text back the tile in the kitchen unexpectedly started started falling off the wall. Seriously.

We put some masking tape (all we’ve got) on it to hopefully stop it from falling completely and shattering everywhere. We soon realized that it wasn’t a little problem where it was bowing out, it was falling in slow motion. You could leave the kitchen for 2 minutes and come back and see a difference.

After a few more minutes we realized it was taking more tile with it. It was going to take the whole wall if it was allowed to. So we put some closed toed shoes on, crossed our fingers and had to precariously hold parts of the wall up while the other person lifted tiles away. Picture a stupid version of Jenga where you’re removing parts of your kitchen. Remove the wrong one and the whole damn wall of tile might come down.

Mission accomplished, though, most of that wall is now on our table. 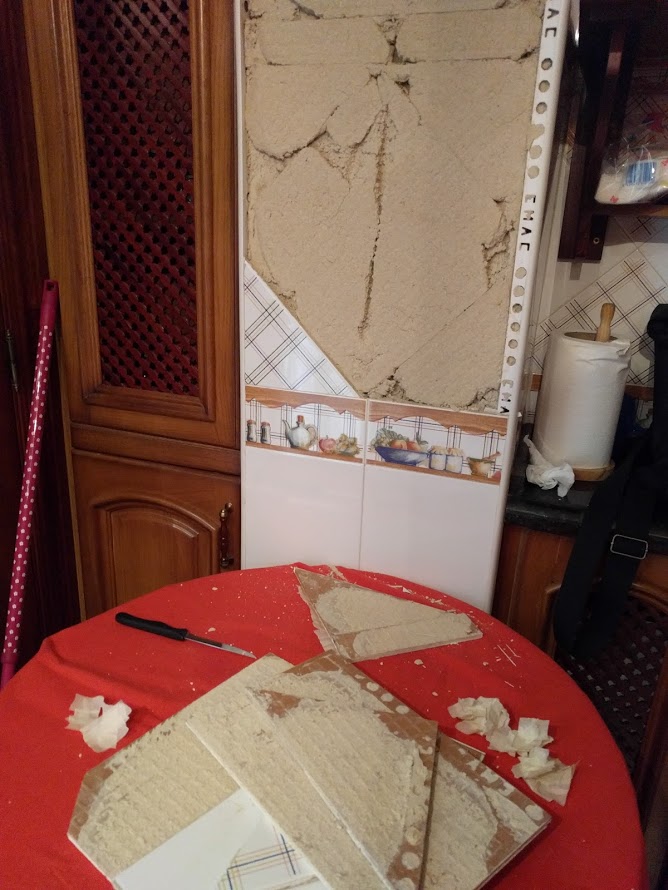 So now the shutter is broken and the kitchen doesn’t have any tile on part of it. There isn’t hot water. Everything is trapped in the computer. It’s all just uggghhh.

We got a text from my coteacher denying my request to just observe. “Just bring your computer.” I wasn’t bringing my thousand plus dollar gaming computer outside in the hot hot sun, and especially not a sticky clumsy child-filled elementary school. (Update: when I got to school I found out the wifi is broken anyway so this wouldn’t have even worked).

So we had no choice but to use most of our data to download it off the computer and fix it all up. Even then, it wasn’t guaranteed to work since we had never tried this before.

If we were anywhere else we could fix these things. A quick drive to Home Depot, a call to a friendly neighbor, a phone call to the landlord. But because we’re new here we can’t fix any of our own problems and are completely at other people’s mercy. It was just a strange, strange weekend.

One thought on “A Strange Weekend”