Turns out swimming (naked or otherwise) in ridiculously cold water is really good for muscle soreness. We had been chalking up 14 mile days here and there. We weren’t sure if we would have the energy to retry the hike to the Guadalmesi Tower hike we had started on the first day. The first day we had been too fascinated by everything around us to really hike. We would go 50 feet and then find something interesting or would meet some cute farm dogs or something. So we didn’t make the 11 mile hike. Now, though, we were refreshed. Our bodies were refreshed from the freezing water and our souls were refreshed with a sort of naked baptism in the freezing water (plus Mexican food). So we were feeling great.

We ended up walking 14 miles because of distractions and just walking to the trail head. This hike is up there as one of our favorites – “Golf Club” hike in Guam, the “Tallest Mountain in the World” hike, also in Guam, and the “Lost Half-Naked Norwegian Man” hike in Italy. I think this ranks up there somewhere with “No Water Black Forest Beer Desperation” hike which was a good hike. If this hike had a name it would be “Spicy Donuts in the Wind” which will become clearer later.

I mentioned all the wonderful abandoned buildings and bunkers we saw last time. We also enjoyed looking around at the flotsam/jetsam and all the Arabic/Spanish trash on the beach (cross cultural garbage!). For those wondering the difference between flotsam and jetsam is that flotsam was dropped overboard off a ship while jetsam was deliberately thrown during an emergency. Given all the weird things we found, helmets, oxygen tanks, a 6 foot tire, a kitchen set – we couldn’t be sure what had been deliberate or not.

As usual the hike was absolutely gorgeous. 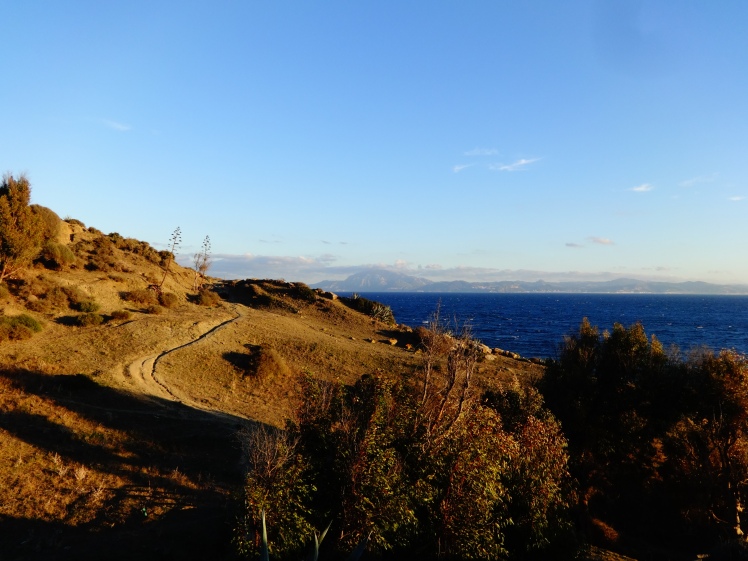 We met some sweet, shaggy cows. Historically the trail we were following was an old herding route so we were on their territory.

This time, the tide was down and we could see the amazing geological formations. I can’t explain it as verbose-ly as Spain’s own website can so here’s how it describes it:

The tour focuses its interest on the impressive views of the African continent … and on the geological formations of the cliff walls and abrasion platforms in the intertidal zones, as a consequence of a tectonically active environment of the lower Miocene, that produced rhythmic stratifications by processes of folding, lifting and transfer of materials. The grandiosity of these phenomena makes the path hide in its path a multitude of curiosities in the coastal rocks.

You can see lines everywhere along the mountain and underwater where the rocks formed.

We were able to walk out on it pretty far (we didn’t stay long with the tide, we learned the hard way)

We made it the 6 miles to the tower which was a little lackluster. Better than the other tower from the day before. 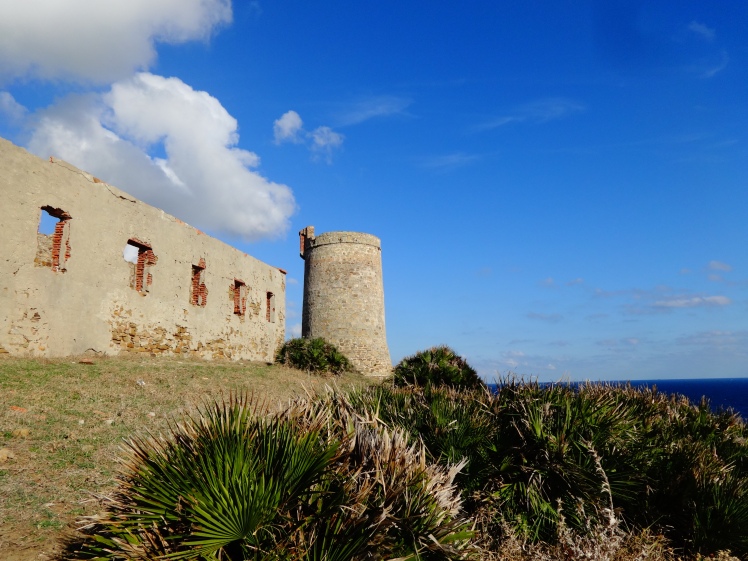 The tower is very old, we couldn’t read much about it since the informative sign has been blasted white by the sun and wind for the past 50 years or so. It was a watch tower to look out for invaders. Looking west, you can see back to Tarifa, and from there you can see to the Torre de la Pena, which we wrote about in a previous blog. Looking east, you see another distant mountain, with another distant tower, and had we made it to there we would have been able to see Gibraltar. This tower was on a cliff overlooking a farm. The sound of 30 cowbells shaking in the 13 mph wind was an oddly beautiful sound so we stayed a little while.

We had lunch -we picked up some cheese-less Cheetos and donuts. We bought them quickly that morning (hence not knowing the Cheetos were flavorless cheese rods).

After eating 1 donut each we took a longer look at the packaging.

Chris had assumed that the fire graphic and the words “HOT CHALLENGE”, were just meaningless marketing drivel. “Heck, even if I had taken the time to read the package, I still doubt I would have believed it.” Spicy donuts? Who does that? …Spain does that. So 4 donuts are your typical convenience store chocolate flavored thing. Then one of them, placed at random in the bag, is spicy. Not Korean spicy though, Spain spicy, which means that Chris ate half of the spicy donut before he realized it was the special one. 7/10, might try again. It was also super windy, hence this hike being named “spicy donuts in the wind”.

We ended this hike bone tired, all of our exposed skin burning from both the excessive wind and sun. We found another roasted chestnut stand and ordered, not one, but two large bags of chestnuts to eat. Back in our apartment we ate them all, and then went out for drinks in the old town.