The stupid thing about our program is that while we’ve only been here for three of the eight months that we’re supposed to be here – they’re already asking for us to renew. I mean I’ve barely had enough time to get into a routine (because everything is always changing!!!) and now they’re asking if we want to stay.

We want to stay. Er. Mostly.

But not in the same town.

Martos is great. It has good people, its small enough to feel safe all the time but big enough to have 5 grocery stores and plenty of dining options. But it’s isolated.

Sure there are places that have it longer but this is pretty long. To even get a visa or do our government paperwork we have to go 45 minutes away. Also the Jaen train lines only service like 5 places, barely. We would be in a better situation if we were closer to an airport. Europe has really good low cost airline carriers where you can get a plane ticket for $10 (we’ve done it a few times before). But since we’re nowhere near an airport and the only way to get to an airport is to take a bus to get on a train to get to the airport … well you get the idea.

We’re spoiled with American towns having an airport almost all the time and spoiled from our time in Germany where trains were a hundred percent on time and could go anywhere. No village was too small to have a train line. Here some big cities aren’t even connected on the train line.

We wanted to live in Andalusia to hike and travel and adventure but we really can’t do these things without a car. And we had no idea any European country could be like this. We assumed they were all like Germany where you didn’t need a car. Here I’ve only seen maybe 1 person biking for transportation (sadly I’ve seen more people riding horses into town than biking). Everyone drives. So without a car we can’t even get to any of the countless national parks to go on a hike. Our hiking adventures will consist of hiking La Peña over and over. Which is fine for now.

So we enjoy our schools enough to stay but we just don’t feel like we can do anything after school or on weekends without it taking a whole day of travel. We can’t go hike after school – we can just walk through olive groves which, again, is fine for now.

So all of this boils down to us wanting a change for next year.

When we apply or renew it’s first come first served based on a number you’re assigned when you complete the application. The renewal opens at midnight Spain time and it’s just a hot mess of frantically clicking through it and getting a good number. Last year we applied from Korea (8 am Korean time) and got numbers 199 and 200. Keep in mind we were finished applying 8 minutes after the application opened so that’s about 25 people submitting per minute.

Those were darn good numbers and helped us get our first choice. This year we had a small issue with technology and applied 15 minutes after the application opened for numbers 236 and 237. So  still great numbers. We’re pretty confident we’ll get where we want.

Where do we want? Well it’s really strange. You have to say which group (grupo) is your 1st, 2nd and 3rd choice.

Then in each group you can only select 1 place. Some places are out (crossed out in red) or troublemakers (orange star). Group B is a big disaster because Aragon and Cantabria are notorious for paying really late, quitting the program, or being hard to get into. So that basically only leaves Castilla la Mancha and Galicia as the only reasonable options.

Well, haha, actually: Andalusia (where we are currently) is terrible at paying on time. We never mentioned this but we got paid a month late and that was maybe not even our money but money our schools kindly fronted us. Yup. Spain works like that.

You don’t care about all this, you just want to know where we’re (hopefully going).

Group B was our 3rd choice with Galicia.

Group A was our 2nd choice with Pais Vasco

and Group C was our 1st choice with The Baleric Islands!!! 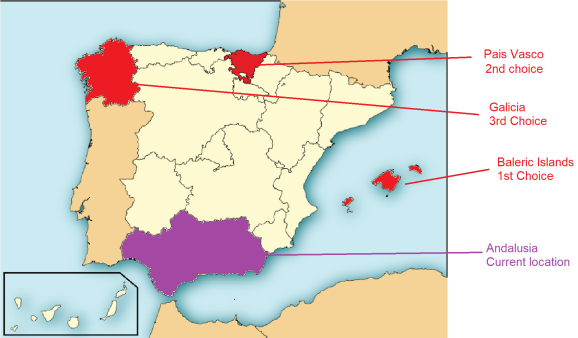 So if you look at the map you can tell we don’t want anything to do with the south anymore. We’re planning to see the heck out of Andalucia while we’re still here so we’re confident we’ll be good and done with it when it’s time to move.

Also being placed in the massive “autonomous community” (a fancy term for a “province”) of Andalusia means you can be in a tiny little pueblo far away from everything else (like how we feel we are now). Our future possibilities are much smaller autonomous communities which means they can’t place us in the ass-end of nowhere. We’ll be more likely to be in bigger cities with good airports and train stations since the province is just smaller.

We hate being isolated – so why pick an island as our first choice? Because they actually have the 3rd largest airport in Spain. And like we said above, we have no chance of being placed 3 hours away from something because we couldn’t be placed 3 hours away. The largest island only takes 1 hour by bus to get from one side to the other. If we aren’t placed on this island there are still ferry and plane opportunities to island hop. So it would boil down to being closer to train and bus stations and airports than we are now.

Also we’ve been to the Baleric Islands before. We know we like it.

So we’ll know in the next few months if we’ve been accepted then sometime maybe in May we’ll be assigned schools.

What about the summer?

Well we said we have an 8 month contract. What about those other 4 months? Pay attention because it’s a wild wild of bureaucratic bullshit.

We can’t leave because then our residence permit/visa will automatically be forfeit and we’ll have to apply all over again in the USA. This would entail a $1,200 plane ticket and about $400 in visa fees. Yuck!

If we stay we have 30 days before the visa expires (maybe 90 days we can’t get a straight answer). We can apply for an extension that lasts 90 days.

We have 123 days between the Andalucia contract ending and the (hopefully) Baleric Contract beginning. So we’re going to apply for an extension and hopefully get grandfathered into the grace period between the visa expiring. This will buy us maybe 120 days. Then we’ll move to the Baleric Islands sometime in September and apply for the renewal visa on the 122nd day.

If it only buys us 90 days then we might end up moving there sooner.

We’ll plan on getting some private tutoring jobs or maybe working at a farm or something to supplement our income. Either way just sitting in our apartment all summer and paying for utilities and groceries wouldn’t be as expensive as getting a whole new visa. So this is the hope. Jaen is full of bastards that are very strict with the visas. Well not strict, they’re straight up idiots about it and interpret the rules differently than other places. So we’re at their mercy. An emergency flight out of Europe may become our only way to not violate EU laws. We’re still figuring this out.