I want to start by saying that I am not an expert in making kimchi.

If you know us, you know that we lived in South Korea for three years. Back when we ate lunch at our schools, we were guaranteed to have at least one Korean meal a day, and during this time I developed a near addiction to kimchi. Usually the rest of the meal was iffy, but as long as there was a mountain of rice and some kimchi, I was happy.

Fast forward to now. It’s been a year since we left Korea and we are starting to get “home” sick. It also doesn’t help that the winter Olympics are being held in South Korea, so we are constantly reminded of it.

So normally, when we start to miss a country we lived in, we find a specialty grocery store, get some imported ingredients, and cobble together a meal that reminds us of what we used to enjoy.

Well, it’s not so easy here.

Our “city” is more like a pueblo (village) for all intents and purposes. Sure, it’s population is something like 26,000, but it feels like a quaint little hamlet. There are NO international products for sale here. Each grocery store has a microscopic international section that has soy sauce, Worcestershire sauce, and maybe some BBQ sauce (not a brand you would ever have seen in the US). We got lucky because one grocery store has a couple of Mexican ingredients (Valentina hot sauce and corn tortillas). Anything extra has to be bought in Jaen, and it’s not much better there.

So what do we do when we NEED Korean food in Spain?

Well, actually we got lucky and found an Asian grocery store back in Almeria. They had a few Korean products, just enough to cobble together a few dishes we used to make in Korea. If Jaen has an asian grocer, it’s hidden pretty well, and both Granada and Cordoba seem to be lacking them as well. And before you suggest it, buying on the internet is cheating.

But then, just the other day, I miraculously found Col Chino (Chinese cabbage/Napa Cabbage) in Jaen. It was on sale, and starting to go bad, but I knew the time to make kimchi was now. The only ingredient besides that special cabbage that I was lacking were red pepper flakes.

Now, Spain does not DO spicy food. There are two common dishes that could be described as spicy here. First would be patatas bravas. Patatas bravas are fried potatoes covered with an equal portion of slightly spicy tomato based sauce, and crema fresca (which is like sour cream before it’s gone sour). The second would be chorizo. If you’ve had Mexican chorizo, you should know that Spanish chorizo is nothing like that. It’s a sausage made mostly of fat, then seasoned with garlic and paprika. Chorizo comes in two varieties, picante or dulce (spicy or sweet), and for the life of me I cannot tell the difference because neither is sweet, nor salty.

But, I got lucky again. I took a chance and bought this. 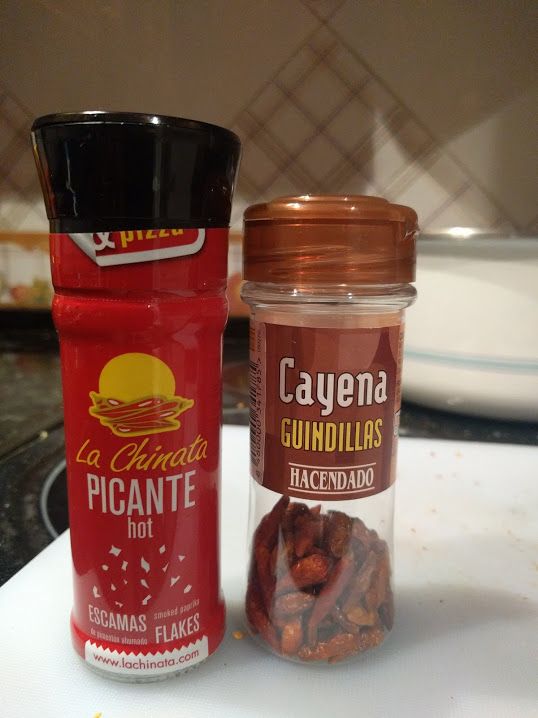 We’ve had the cayena since we first moved in. They are small dried chilies, and they pack a mean spice. But I needed something more, and something pre-ground (the cayena don’t soften or chop for anything). The “la Chinata” is what I found. I didn’t trust the label when it said it was hot. Why would I? But I took a chance, and I am happy to report that it is indeed spicy, very spicy actually. But it is also smoked, which makes sense since it was probably intended for the more adventurous chorizo makers, the extreme fringe of Spanish abuelas who want to jazz up their cooking. Well, whatever, it’s what I’ve got, so in the kimchi it goes.

I won’t post a recipe here, mainly because I didn’t follow one. I looked at advice to get the timing right, and to make sure I didn’t forget anything major. But, because it helps explain what kimchi even is, I’ll describe the process below.

First cut the cabbage, then soak it for 6 hours in salt water.

Then strain it, try to squeeze the water out.

Then make a paste of ginger, pepper flakes, garlic, and sugar. Add scallion.

Throw it in a glass jar, throw the jar in a cool dark cabinet.

Then it should be ready to eat in five days or so. Technically it’s good after two, but I like it more….kimchi-y. Plus it’s freezing cold in our apartment, and from what I understand this might hinder the fermentation process. 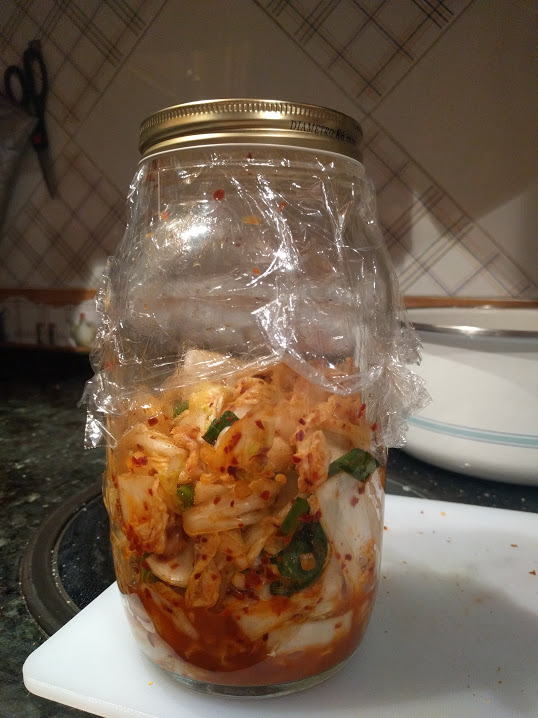 It looks pretty good I think. I tasted it and it has a nice smoky flavor from the Spanish peppers, which is different. I also used too much salt in the first stage, and I did a half assed job squeezing the salt water out of the cabbage. But that probably just increases the shelf life. I’m pretty proud of it!

The specific Korean food I was craving is 김치 볶음밥, or kimchi bokkeum bap, or kimchi fried rice. It’s incredibly simple if you already have kimchi. It’s rice, kimchi, some veggies if you want, and my favorite…..SPAM. It usually has a fried egg on top and it’s lovely.

I’ll cross that bridge when I get there.