Half the reason we requested to be placed in Andalucia was because of the all hiking and nature nearby. We have Doñana National Park, Sierra Nevada National Park, and Cabo de Gato as official natural parks. Then there are tons of natural mountain parks: Sierra de Grazalema, Sierra de Aracena, Sierra de las Nieves, Sierra Sur de Jaen, Sierra Subeticas, Sierra Magina, Sierras de Cazorla (the 2nd biggest natural park in Europe and the biggest in Spain – it actually covers 1/5th of our province).

Being in Granada meant we were within spitting distance of the Sierra Nevadas. While we would’ve loved to ski, we don’t even have ski jackets anymore. Plus the weather was ripe for hiking.

There is a magical website that has every hike you could ever want in the Sierra Nevadas. We did some research and picked the Beas de Granada to Granada hike. This meant taking the 300 bus from this location (trust us, there is a stop here), to the city of Beas de Granada then hiking 10 miles back to Granada over the mountains. It’s actually close enough to the city to be considered a day hike.

This same website has a PDF to print or download that has explicit directions on how to get from the bus stop to the trail head. If that isn’t enough there is also a download to put on your GPS that gives you perfect directions. There is no way you can mess it up with a couple minutes of research. Ominous foreshadowing -but not for us.

The bus schedule for Saturday was really bad. You could leave at 10:30 am or 1:30 pm to get to Beas de Granada. If you wanted to go from Beas de Granada back to Granada there were buses a few hours later.

We weren’t the only people hiking the route. We caught the #300 bus with 9 other people – 3 couples dressed to the nines for hiking and a group of 3 very loud trust-fund hippies. The hippies shouted about gun control and how much hiking they had done in Peru and “how easy it would be to find the trailhead” (which is hilarious in because of the foreshadowing).

When we made it to the city of Beas de Granada (about 30 minutes later) the bus actually struck another car. The village was built a long time ago so there isn’t enough space for two cars. There especially isn’t enough space when everyone parks outside on the street. So this car was pulled to the side (barely). Our bus scraped it pretty bad – the driver didn’t care or notice the scrape so he plunged ahead and we violently ripped the mirror off the other car. It popped off and flew 30 feet away. We were basically fine to go ahead and pretend that didn’t happen but luck would have it the car was full of people. They came scurrying out to see the damage. The male driver was fine but when his wife and mother got out of the car they were out for blood – shouting and screeching about the mirror. The bus driver said “sorry, follow me, I gotta drop these people off.” So we crawled up the hill slowly in the bus while the family walked behind us. Some villagers heard the commotion and came out to see. So people joined the victims to come talk to the big city bus driver. There was a small mob waiting for the driver when he parked.

We felt bad for him. We also hate tag-a-longs (the people not the cookies) so we waited for the 9 other hikers to disperse and to see how our bus driver would fare. We watched them exchange all the details and the poor bus driver had to get on the phone with HQ. We thought we gave everyone enough time to start hiking but no one (all 9 people) had any idea where they were going. One couple might have made it with power-walking but the other couples and groups were backtracking and walking all over the small village. They had brought directions but didn’t seem to be following them.

The first step is to follow the wooden signs for Quentar:

You then get off of the paved road onto a dirt road. Plus a donkey: 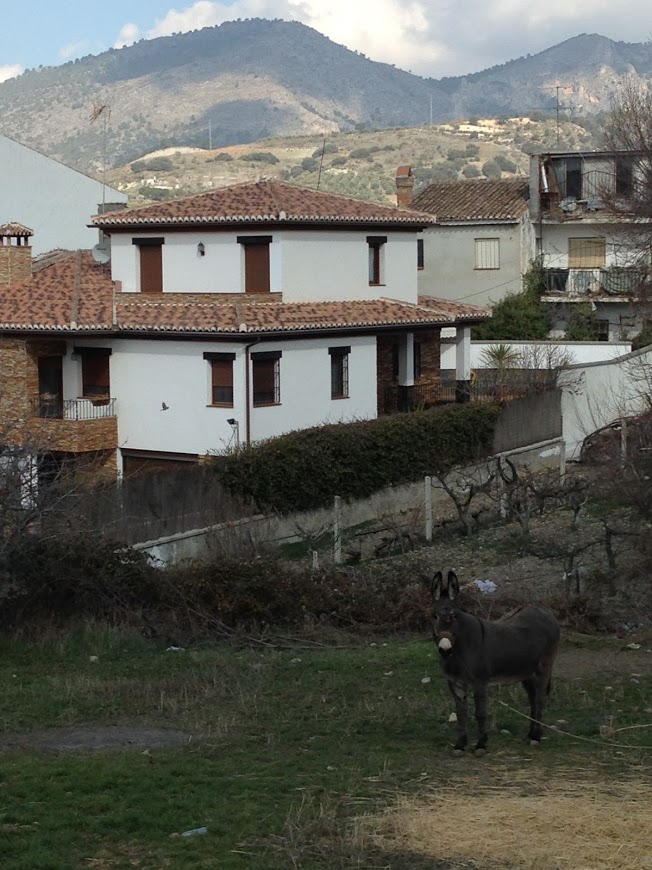 The loud hippies were on a completely different (wrong) road. Yes, we could’ve helped them but again, we don’t like tag-alongs and they had been so loud for the whole 30 minute drive. The moral of the story is to use your inside voices next time and people might want to help you. Of the 9 people on our bus we’re 95% sure none of them made it on the path. We kept looking back for the whole 10 miles and never saw movement anywhere on the paths. Don’t be a statistic: only 2/11 people will even make it to the trail head. Get a GPS (thanks uncle Dan!).

We brought our handy dandy GPS and were really thankful for it. We had a wrong turn (totally Kaeti’s fault) but there was a muddy shortcut to the real path. No harm done. While we were in view of the loud hippies they weren’t observant enough to even notice people traipsing through a muddy field just above them.

Finally we were on the real trail:

What a lot of people don’t want to say (but we’re going to say it) is that a lot of “hiking” in Spain is just walking on dirt roads (or in the case of the famous Camino de Santiago, actual roads). To us, hiking is on a natural dirt path, usually under some trees. But this “hike” was following a dirt road the entire way.

We were passed a lot by dirt-bikes at first and then plenty of bikes later. At the end there was an actual paved road we had to walk up. It actually turned into a real hiking (dirt) path under some trees. However, for the most part this hike was completely on a road the whole time.

Of course that doesn’t mean it’s not pretty. What this means is

B) If you went during the summer you would cook. There is no tree cover.

The almond trees around us were in full blossom, though (in late February).

We had a view of the snow capped Sierra Nevadas but they looked like clouds the whole time and we couldn’t get a clear picture besides at the end:

The journey went well. The whole time we could look back and see the trail very clearly.

We had lunch on the edge of the trail – just leaning against a dirt embankment on the side of the road. There were no rocks to sit on or trees to lean against. It was a very exposed hike which led to a small sunburn on my part. Whoops.

Besides looking at the mountains and flowers we could also see some abandoned homesteads, an old aqueduct (not that old) and even a huge abandoned monastery.

After we hiked up the paved road we were technically in part of the Generalife extended gardens. Loads of families were picnicking and playing music. We hiked down and around and popped out right at the Alhambra. We had to hike down stinking with sweat and all pink from the sun -all aside of tourists who looked at us side-eyed. Still this is a fantastic hike – one way and long. You don’t NEED a GPS, the trail is pretty consistent. But there are lots of farmer tracks that intersect it, and some of the signs that were promised to be at those intersections were mysteriously missing. Print out some instructions, and have a map on your phone at least.