A few weeks ago, the principal of my school asked me if I would be interested in accompanying a group of German students around Andalucia.

As it turns out, our school does this every year. For one week students from Germany come to Spain, take a look around, share their culture etc. And apparently some of our students will travel to Germany and do the same thing in a few weeks.

The German students were all in “gymnasium”. Germany has three kinds of school that take the place of American middle and high school. Two schools prepare students for vocational related professions. While Gymnasium is the path that leads to university.

The school I work at in Spain has vocational and “bachillerato” paths in the same building. So it’s similar.

The German students all spoke magnificent English. We knew that from visiting/living in Germany. It’s hard to find a person in Germany that doesn’t speak great English. They start learning in their first or second year of school, and they never stop. It isn’t treated like a foreign language, it’s just another subject. Then when they get to gymnasium, they continue learning English, and then they get to choose a foreign language to start studying. It seems that French is the most popular, but Spanish is indeed offered.

None of them seemed to have had Spanish as their first choice. One girl told me that she had studied French for 4 years, but she didn’t want to continue studying it because the classes were getting too advanced, so why not jump into a level 1 Spanish class? Keep in mind, her native language is German, she is practically fluent in English, and speaks advanced French, and is on track to learn at least a basic amount of Spanish. This seems to have been true for all the Germans present.

So, these Germans (who are all fluent in English) get paired with Spanish students (who are all pretty good at English after a certain level) with the goal of practicing Spanish. They did indeed share their native languages, mainly curse words, but when they wanted to communicate, they all used English. So that’s why I was involved, to bridge the gap between Spanish, German and English. This really hurt my brain. The Germans would speak amongst themselves in German, the Spanish kids in Spanish, and together in English. While not being fluent in German or Spanish, I did live in Germany for one year, and I have studied my ass off to learn Spanish, so I was able to understand almost everything, and I found it really difficult to separate the three languages in my head.

The Germans were living with host families, and had their Spanish buddies to show them around, so there was nothing for me to do. But I did get to follow them around for a few of their adventures.

That’s right! We took a tour around quaint little Martos! We went into three churches, learned about some of the history (apparently a nun was killed by one side or the other during the civil war, and her body is on display. This must have been mistranslated, because what we saw was very clearly a porcelain figure in a glass case). We went into the library, saw an art exhibit full of art made by one of the teachers at my school. Then into the old town to look at the castle.

Germans are very honest, which I had forgotten. So when I asked them “Oh, how do you like Martos?”, I got some honest answers. They weren’t horrible, just direct. Most said that it was “quiet, a bit boring, dirty, I think Germany is better” etc etc. They also got tired of seeing churches after the first one (so did I).

The next day we took a bus to Cordoba. The school actually chartered one for us, so it was a very easy journey.

We parked near the Puente Romano (Roman Bridge) which was indeed built by the Romans. It can also be seen in Game of Thrones (some of the earlier seasons in Volantis) 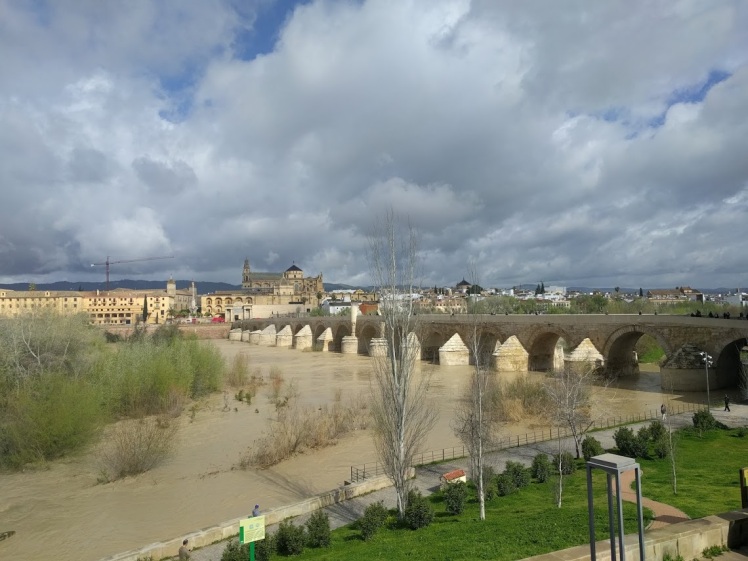 Across the bridge is the Mezquita de Cordoba, and the focus of our visit. I actually had to give a small introduction about this, so I learned a lot about it on my own.

Long story short, it was a mosque built by the first Emir of Cordoba, after the Moors took Spain from the Christians. Constructions tarted in the 700’s and ended in the 900’s. Inside there is a forest of columns. This is were the masses of people would pray towards Mecca. It is absolutely is amazing, the columns stretch on in all directions. There are countless photo opportunities, but sadly the whole thing relies on natural light, and they day we visited was seriously overcast, so turn to Google for better quality pictures. All in all, there are something like 865 columns, most scavenged from Roman and Visigoth buildings. There used to be more, but some were destroyed to make way for……

The cathedral! In the picture above, notice how the roof doesn’t really fit in with the red and tan motif? That is the cathedral, and it was added much later. In the 1500’s the Spanish had long since kicked out the Moors, and they were making tons of money with all their new world exploration. They finally had enough money to start building their own stuff. They looked at this mosque, and decided to christian-ify it. So they built a cathedral inside the mosque.

They “only” had to tear town 200 columns to make way for it, so that should give you some idea of how large the mosque was/is.

The king who commissioned it (Carlos V for you history buffs) regretted it. He said that it was basically just another cathedral, too similar to every other cathedral being built in Europe and Spain at that time. He apparently said, “You have destroyed something unique and replaced it with something common.”

After this, we let the students loose on the city and ate tapas and drank beer.

After collecting the students, we got back into the bus, and went out of town to visit the Medina Azahara.

In the 800’s, there were two major powers in the Islamic world. One based in Baghdad, and one in Northern Africa near Tunisia. After the Moors took Spain, they became a new major power. To prove this, the Emir built the Medina Azahara (Shining City). This was a palace/city built entirely from scratch. It was the envy of pretty much every king, emir, caliph, or anyone else with a palace of their own. 10 years after it was built, it was totally destroyed in an uprising (I don’t know who was uprising, but they hated this guy’s house).  Today, only about 10% has been dug up and restored.

It would have been as grand and intricate as the Alhambra, but this has been ravaged by neglect and time.

Also, for those curious to visit it I will say this. They did a good job of giving information about the site. Most places we have been to in Spain have very little information to help visitors. It isn’t a lack of information in English, they just don’t tell you anything. Prior to visiting the site, we watched a decently animated movie about what it would have looked like, who built it, why it was built and how it is being restored.

I’d recommend it just because they did a good job presenting the history of the area, and it makes a neat contrast to the Alhambra, or the Alcazar in Seville (two similar palaces that have been preserved and renovated to near perfection.

The Germans also visited La Pena, Granada, and Malaga. I didn’t go with them because I had to go back to work, but it was super fun to witness the language exchange, especially because most of it was in English, something I didn’t really expect.

2 thoughts on “The German-Spanish Exchange”