Almuñécar is spelled with both a ñ and an é. This involves typing alt + 164 and alt+0233 or copying and pasting the letter every time. Also the accents don’t appear on some people’s computers. Often it looks like Almu^0car. So we’re going to type it without the accents. Sorry!!!

International Labor Day was May 1st (The USA has Labor Day on a completely different day so go figure) so we had a long weekend. We were racking our brains for somewhere to go. We’ve been to many of the big cities in Andalucia and wanted something different. Also we wanted somewhere close. We don’t enjoy 5 hour bus rides so we wanted a quick trip – not an ordeal.

We found Almunecar accidentally when searching for “Jaen” (our province) in the guide book. Almunecar isn’t in our province but in Granada province (next door)- the reason it appeared in our search was because there is a direct bus from Jaen. Hooray! So on Friday night we took a bus and within 3 hours we were there!

Almunecar is a medium sized beach city nestled between the Mediterranean and the mountains.

Facing south you see the sea

We stayed in a family owned hotel Hotel Goya – they didn’t speak any English which we enjoyed. We were told Almunecar was mostly a place for Spanish tourists (although there were a considerable amount of British and Swedish tourists) so we could expect to speak more Spanish.

The first night we arrived pretty late at night. This only meant it was Spanish dinnertime so we went for hot dogs and sandwiches at “El Vikingo Bocateria” (The Viking Sandwich Shop). It had fantastic 90s decoration (not in a hip-retro way but in a the decor is fine the way it is for 20 years way). The woman was crazy nice and after we paid the bill asked if we wanted a “chuche” not really knowing what that was we said sure. Turns out the literal translation is “candy” but what she meant was two huge shots of rum and candy. For free. She even let us pick our own booze. We didn’t know what to get so she recommended an expensive and local rum that tasted like pure honey. Amazing.

We took the gummy bears to go.

The next day we explored the town. We went to an overlook and got some great pictures 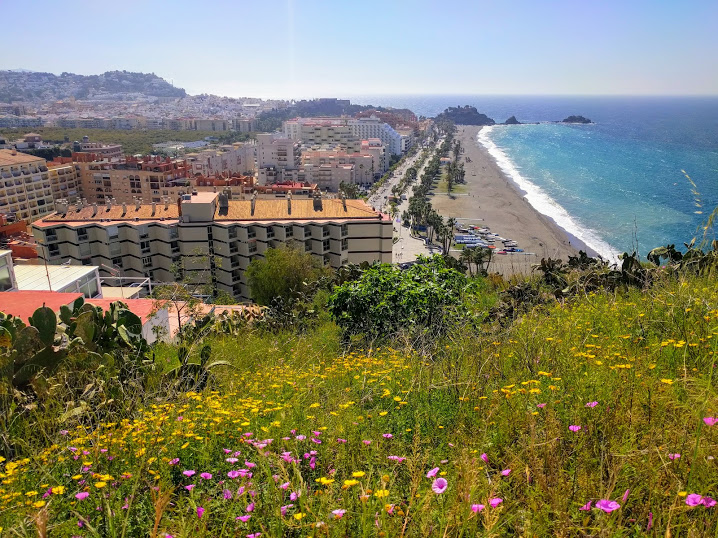 Then we went to the castle. 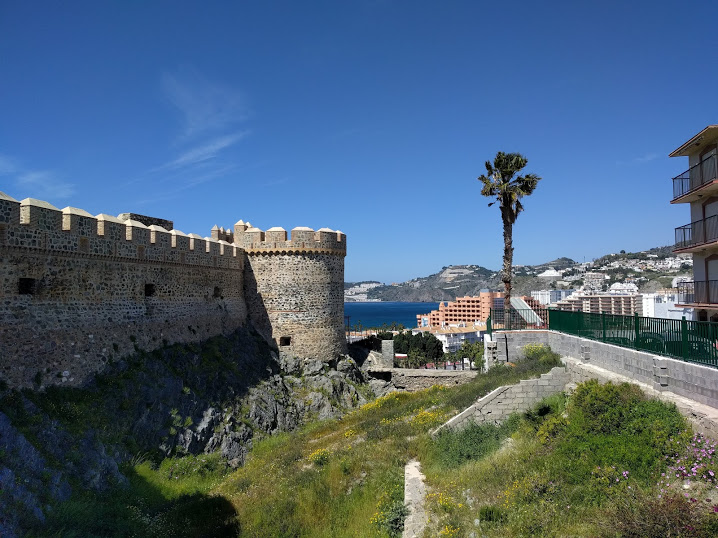 The castle has the usual backstory of every other castle in Andalucia: some Romans thought it was a good place for a castle. Then everyone else throughout history agreed. As the area changed hands from Christian to Muslim everyone made additions or built over the other person’s religious buildings. Same story but Almunecar was a bit different in appearance. For one, a whole tower had fallen off (no good pictures of this, sorry). Also the stone work had a pattern in it, rather than a typical uniform rock color.

We explored the area. The old Roman name for the city was “Sexi” which elicited a few giggles because there were Sexi baths and Sexi fish processing facilities. Sexi birds. Everything was very sexy, er, Sexi.

We learned that Almunecar is one of the few places in the area that can grow sugar cane. There was actually an ancient sugar mill under the castle. Incidentally there was a skeleton in the basement – looks like they left the castle and just left a prisoner behind. His skeleton was found still in chains later.

Anyway – in addition to being one of the few places that could make sugar- Almunecar is one of the few (and best places) for avocados and cherimoyas (custard apple/sugar apple) -a special fruit. We could see the groves everywhere – a huge change from the millions of acres of olives that we’re used to.

In the foreground is the Roman fish salting factory (garum factory) and the patch of green/orange behind the yellow building is a cherimoya grove – right in town.

The next day we set off before breakfast to hike the aqueduct path. It would, supposedly, lead to 5 different parts where you could see the aqueduct. These are proper Roman aqueducts that are still surviving – Sexi aqueducts! So we were excited to get to see them.

The first part you can see is still in town. It’s underground but they did a great job making a path around it and excavating it. Behind the aqueduct in a little hole in the wall there was a fancy Roman burial. In the foreground were Roman baths. The circular pool was cooler water and the ones to the left were tepid and hot. 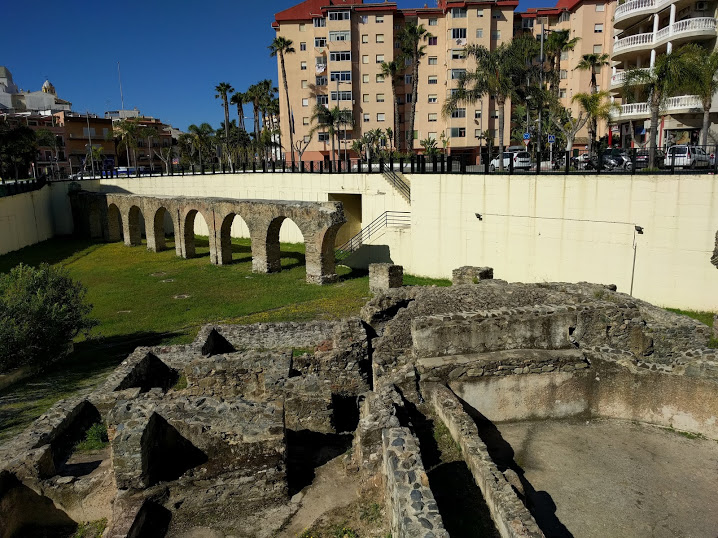 This is a great time to say – why is it so far below modern day street level? Before humans paved the roads cities literally just rose up. You dumped all your trash and everything in the street and people would keep walking on top of it eventually a ground floor became a basement unit. Also demolishing something (or a building falling over) – you’re not going to take the time to remove all the rubble – just build on top of it! So seeing the aqueduct and spa about 20 feet below the street puts 2067 years into perspective.

The next aqueduct was probably the best. We had a beautiful walk alongside every kind of flower you could imagine. Not just people’s overflowing, lush gardens  – but wild flowers that had taken over abandoned buildings and fences. 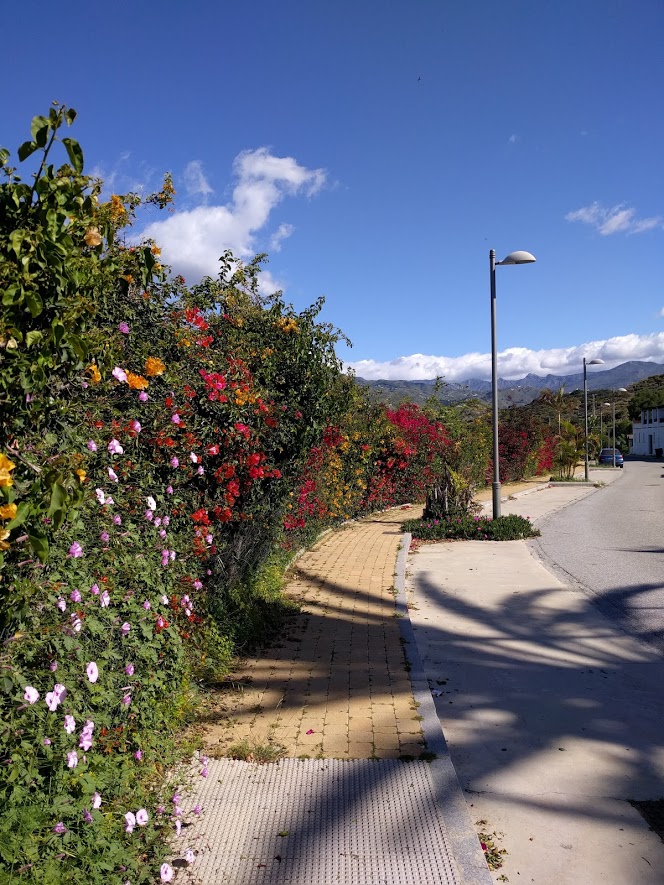 We ended up seeing almost every flower you can think of either wild or in someone’s garden. Roses, poppies, hibiscus, wild orchids, sweat peas, lathyruses, loads of different colors of nasturtiums, daisies, morning glories, peonies, pansies, cornflowers, hydrangeas, jasmine, lilies and a bunch I don’t know the name of. It was absolutely amazing. I’m not a huge flower person but I had to stop frequently to take pictures.

We made it to the aqueduct. It was huge and the Sierra Nevadas in the background made it all the better.

We hadn’t had breakfast so we had some granola bars here in the wind, standing in a field of wildflowers just at total peace. No lesson plans or crap to worry about, just a Sexi aquaduct, some flowers, and a granola bar.

We hiked out of town on a single track road that turned from road to dirt road to dry riverbed. It was really common in this area to just drive on the riverbed as if it was a road (and the city paved roads leading in and out of the riverbed).

We dipped in and around the valley a few times. Looking back you could see the sea and the groves of cherimoya trees.

We hiked under and around two huge bridges. At the second one we found roses bigger than your head.

We had a snack at the base of the bridge (only shade around).

Besides the fascinating flowers we started seeing loads of wild growing succulents. They were happy as clams in the soil here and we saw many that we had only seen in tiny-pot form as huge monster succulents. 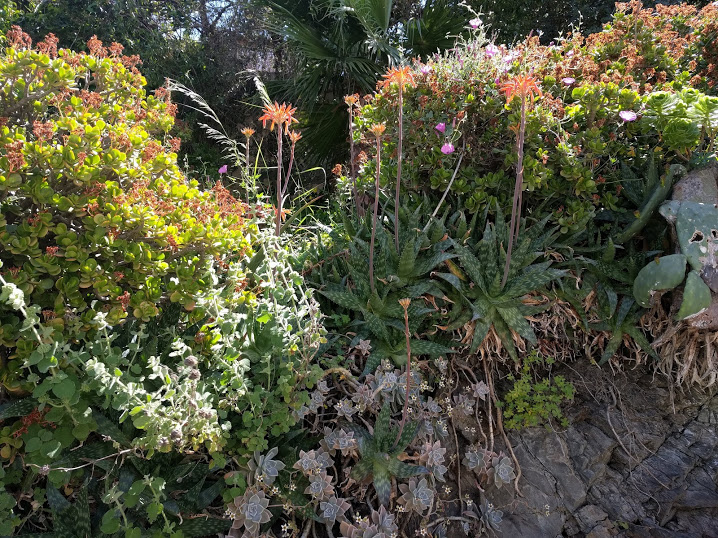 We made it to the outskirts of the city where there was another part of the aqueduct. They had built a park around it. I won’t include a picture since it’s the same (more or less) as the first one.

We got to walk down the “dry” riverbed for the next hour – back to town. It wasn’t exactly dry so we had to continuously go over and back and forth to where there was dry land.

We made it back to town 5 hours later. A restaurant we had been intrigued in was just opening its doors (Sunday). They had a Menu del Dia (a 3 course meal with bread and drinks for $9 each). Coming back from a big walk/hike with only snacks this was a crazy opulent thing for us. Who doesn’t want to roll in from a hike and get a fancy 3 course meal?

For the appetizer Chris got cuban rice (rice with a sweet salty tomato sauce and an egg) I got salmorejo (typical Andalucian cold soup made with garlic and tomatoes and thickened with breadcrumbs). For the main dish Chris got a lamb chop with aioli sauce and I got steak with garlic cream sauce. Dessert was “3 chocolates” chocolate cake.

The next day we “hiked” to the nearby city of La Herradura – well close enough to it. To get there you walk out of town (Almunecar) and through a nude beach. It was fairly early in the morning so there weren’t a ton of people out but still. We didn’t want to seem like creeps as the only clothed people there but fortunately there were other walkers and hikers so we followed their lead to just walk through the good naked folk.

We took some stairs up then cut through the woods up proper dirt-trail hiking. We had a good view of Almunecar and the nude beach below. 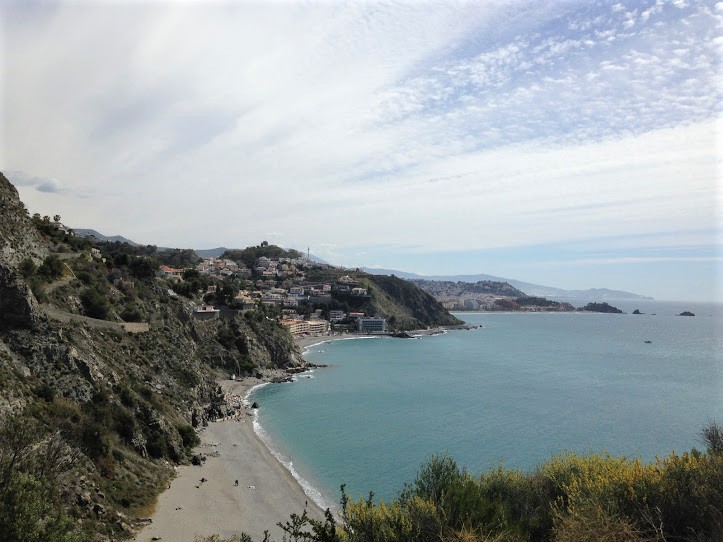 Heading towards La Herradura we passed a pueblo blanco – a village where all the houses were painted white.

We went around this and up to a lighthouse where we had more or less the same view from the dirt path. We could see La Herradura below but we were now “hiking” on the side of a busy road so we tapped out. We were sunburned enough from the aqueduct hike and were fine to just go home and get out of the heat of the day.

On our way back the nude beach was far more busy and with a lot more nude yoga. We’ve been to topless beaches before (heck, every body of water is a topless location) but never a nude beach so this was a new experience.

We holed up in the hotel out of the sun for a while. When the sun started going down we headed to an overlook to watch the sunset. By the way, the sun sets at just past nine. The sunset was pretty good (sorry no pictures!), but we were getting hungry so we called it quits just a bit early.

This was the end of our long Labor Day weekend. The next day we packed up and went home. Almunecar was a pleasant surprise for us. We didn’t know what we were in for when we decided to come but it turned out better than we expected.