I am sure that you have all seen the Spanish flag at some point in your lives, but just in case, this is what it looks like:

I feel like we learned a lot about flags in school, like about what each color signifies. For example, the green on Ghana’s flag represents the forests. The white background of Korea’s flag represents peace. So I figured that the Spanish flag would have similar symbolism. Does the red represent valor or the bloodshed that created it? Does the yellow represent olive oil?

Well, the answer is no. The colors are just colors.

The battle standard of the Christian Monarchs during the Reconquista (around the 1400s) was a confusing tapestry of lions, castles, some eagles, and also some red and gold stripes. It was a mess:

Fast forward to the 1700s. Everyone in Europe was more or less constantly at war with each other for many different reasons. The flag of Spain at that time was a white background with a complex royal crest. King Carlos III noticed that most European countries have white in their flags, which made fighting each other confusing. He had a flag specially made to be unique in Europe. The colors chosen were red and gold, which was probably inspired by the battle standard of the Reconquista (I mean, they are the most consistent colors that are not white).

The current flag is based off of that flag – the one created to be less confusing.

In the center is the royal crest aka the current coat of arms.

Here there are symbols representing the various kingdoms and dynasties that have made up Spain:

At the top is the Spanish crown. Spain is still a monarchy today even though it dissolved in the 1940s then came back, much to the chagrin of everyone.

There are two crowns at the top of the pillars that represent both crowns that Spain has possessed. Their own crown (royal crown) and the imperial crown. The imperial crown comes from when Carlos I (Charles I) of Spain became Holy Roman Emperor and changed his name to Carlos V(Charles V). Basically the pope said Carlos could be Holy Roman Emperor, emperor of the Holy Roman Empire. Which was neither holy, nor Roman, nor an Empire. Nor did it include Spain at all. And Carlos wasn’t even Spanish and didn’t speak Spanish. He was also inbred as heck.  In short he ruled Spain and the yellow bits on this map: 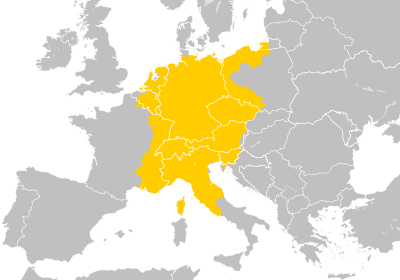 At the very center of the 4 former-kingdoms (not labeled on the picture) is the Bourbon Fleur-de-Lis (in the middle). Why is this French symbol on the Spanish flag?

One of Spain’s kings died without an heir – there were two possible candidates: Austrian Hapsburgs and French Bourbons.  The War of Spanish Succession happened and the Bourbons won. Their heir (Philip V) changed everything about Spain (borders, land, and monarchy).

At the bottom is the pomegranate of Granada. Granada was the last kingdom to fall, transferring power from the Moors to the Christians. It was center of power for a while and is where the king and queen sanctioned Christopher Columbus’s journey. Granada has a deep history in Spain and is, honestly, deserving of its own little bit on the flag.

Finally on either side are the Pillars of Hercules which, in a way, represented the end of the world for everyone inside the Mediterranean.

There’s a third mountain in Ceuta, which is in Africa but is Spain’s enclave. So when Spain is talking about the Pillars of Hercules they’re probably talking about their pillars (not Morocco’s- although Morocco’s is taller and was the more recognized one).

History of the Pillars of Hercules

The Phoenicians (an ancient group of super sailor people who lived near modern-day Syria) spent pretty much all of their time sailing around the Mediterranean trading with everyone. If you were an ancient Phoenician, you could easily trade with the Egyptians, the Greeks, or any of the other assortments of cultures living in Italy, Spain, or North Africa. Initially there was not much of a reason to go further, beyond the Pillars of Hercules. The Mediterranean was figuratively the center of the world (which is what it literally means in Latin), all the best cultures were based around it.

They knew there was more out there (the Phoenicians traded with the British Isles), but it just wasn’t worth it. So they said that Jebel Musa (Morocco) and Gibraltar were actually two gigantic ancient pillars that Hercules created to mark the ends of the earth, and also to hold the up the sky.

Maybe they did this to mess with young sailors, or maybe to make their trading missions sound more interesting (“Yeah and then we totally sailed through the Pillars into the unknown. It was, like, super dangerous.”) Either way, the name stuck.

These pillars are a common myth, you can’t visit Gibraltar without hearing all about them, but what apparently nobody realizes (and y’all need to finally wake up and learn!) is that Hercules made a third (fourth?) column…. aka La Peña.

Our La Peña! Martos’s claim to fame. Bet you didn’t know the mountain in our backyard is holding up the damn earth.

Top Left- The greatest of the   four pillars, La Peña

Martos (your little city) has a Pillar of Hercules?

I didn’t make this up, the Romans did. I don’t know why the Romans made the connection between La Peña and the Hercules myth. Maybe it was a clever advertising campaign to get more colonists from Rome- those Romans loved their Greek myths. La Peña is pretty impressive, but it doesn’t mark the ends of the earth. It’s not even near the sea! Regardless, La Peña is considered the third Pillar of Hercules by some locals.

Finally, going back to the flag – wrapped around the Pillars of Hercules is a banner with the words “Plvs Vltra” (Latin substitutes V for U, so… Plus Ultra). Which means “further beyond.” This is Spain’s official motto.

This wasn’t always their motto. Before 1492ish it was “Ne Plus Ultra” which meant “nothing further beyond.” This is because people from the Phoenicians to Christopher Columbus considered anything beyond the pillars worthless. Spain (which possessed Gibraltar at the time) owned both Pillars and thus controlled the end of the worthwhile-world.

Until 1492. Nothing was removed for obvious reasons. There absolutely were things further beyond. Since Spain sanctioned the journey they could claim the fame of going further beyond anyone else and “discovering” the new world and colonizing most of it.