America gets a lot of flak for it’s terrible coffee. The main complaint is not that the coffee is bad, only that it’s been prepared poorly. That, and the focus is on quantity and not quality. These things really go hand in hand because Americans live for drip coffee and we can’t even buy a coffee machine here.

Is it true that American coffee is bad?

After living in Europe for two years (one in Germany, one in Spain), I can safely say yes.

Europeans actually drink more coffee (per kilogram per person) than Americans. On a list of top coffee drinkers, America only ranks a bit higher than Spain. America is the 22nd highest coffee consumer on Earth. Spain is 25th (and South Korea 26th). Germany is 8th. If you’re wondering about the numbers you can look here – Europe dominates the list.

Although this probably comes from the fact that espressos use more ground coffee to prepare than drip coffee. You might think you’re scooping loads of coffee into your drip machine but it doesn’t compare to the concentrated amount of grounds that go into a single coffee in Europe.

While America out-ranks Spain in terms of coffee consumption, Spain still makes it better. They have a quality vs quantity idea. Yes they drink it for breakfast but they don’t need it to wake up. I see just as many adults sipping on hot chocolate or just having a juice. They don’t need it the way Americans say they need it.

There is a huge difference in what coffee means to different cultures. In Northern Europe it’s what you drink when you visit friends, in America its either seen as your entire life-blood or as something to be mixed with 3,000 calories of fluff. In Spain it is something to sip and enjoy when you take a break.

It’s appropriate in the morning, or in mid to late afternoon. Older people usually go out for a coffee and a slice of cake or a pastry around 5:30 or so (think like a British Tea Time or German Kaffee und Kuechen). In our region almost every meal is ended with a cup.

Coffee is seen more as a relaxing drink, something to appreciate when you get a moment to relax. Heck, the coffee machine in my office had an electronic display that would say “Permit yourself a moment to relax.”

This is a far-cry from the coffee slogans in the USA that say, “The best part of waking up”, “America runs on Dunkin'”,  and “Life is short, stay awake for it” etc.

Are there American brands?

In larger cities you can find American coffee companies such as Starbucks and Dunkin’ Donuts. Starbucks is a place for young, trendy people to go, and I don’t think many Europeans, if any, go there for coffee, just the crazy lattes. Meanwhile, Dunkin’ Donuts is usually found near train stations, but they don’t call it Dunkin’ Donuts, it’s called Dunkin’ Coffee (though you can still get donuts there, go figure). There are also a few mom and pop “American style” coffee shops, but they are few and far between ’round these parts.

A Guide to Spanish Coffee

This is just a basic espresso. It is the standard issue coffee that all other coffee beverages are based off of. When taken solo, it’s just pure unadulterated, condensed coffee taste. It’s like a sipping whiskey – you can bomb the whole thing in one shot, or sip on it for 10 minutes. 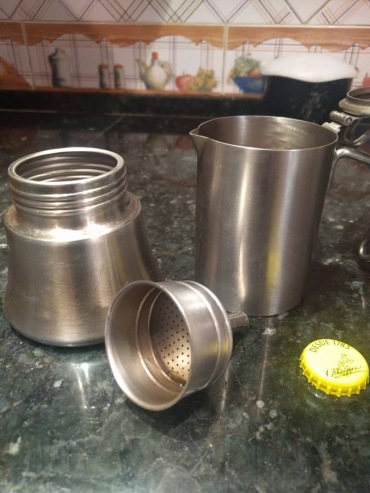 This is a simple espresso machine (the bottle cap is for scale). Water goes into the bottom, coffee goes into the little basket looking thing. The basket sits above the water, and then you screw the whole thing together. When you put it on your stove, the water in the bottom boils, and is forced up through the coffee basket into the reservoir on top. It’s simple, takes only a few minutes, and doesn’t require any cleaning (except the removal of the used grounds).

Maybe it’s due to where we live, but every time we order “Un Cafe” this is what we get. It’s also the most common thing that I see other people order. And if it is not officially the national drink of Spain, then I don’t know what else could be. It’s very simple, just a 50/50 ratio of espresso to warm milk.

Cortado means “cut”. Basically this is an espresso with a hit of milk foam or milk foam. The last time I ordered one I was a bit disappointed because the difference between it and a cafe con leche is almost non existent.

Cafe largo is my personal favorite. And to be honest, I’m not sure exactly what it is. It should be an espresso made with a slightly higher ratio of water to ground coffee. The result is not as strong as a pure espresso, but no where near as weak as an Americano. If you ask a waiter in a tourist-city for a largo, they might ask you if you meant an Americano. They might suspect you are secretly, desperately, asking for the weakest coffee on the menu and they will try to give you an alternative. Speaking of Americanos….

So, the story goes that American G.Is fighting in Europe during WWII would order their coffees with a 50/50 ratio of espresso to water to make it taste more like the coffee back home. Now all over Europe and Asia you can order an Americano. Before living in Korea, I had never once had an Americano. Why bother? If you’re in America just make a freaking drip coffee.

When I first got here, I wasn’t sure what kind of coffee I liked. So one time I decided to order an Americano. The poor barista had no idea how to make it. She ended up consulting a dusty old chart kept underneath the toaster to catch crumbs, shaking her head the entire time. She gave me an espresso in a large cup with a pitcher of boiling water for me to add myself. Other cafeterías will just give up and give you a largo.

There are also cappuccinos (espresso with warm milk and milk foam), mochaccinos, which is like a cappuccino with a bit of hot cocoa thrown in, and a few more that aren’t unique enough to really be mentioned.

A proper Spanish cafetería will also have cakes, pastries, and ice cream on top of a bunch of tea options. If you are hurting for coffee and can’t find a dedicated cafeteria, don’t worry. Most restaurants will have a fully functioning espresso machine and will be perfectly capable of making you any kind of coffee you want.

And finally, what if you like to have sugar with your coffee? Will you have to ask for it? NO! Every time you order a coffee, you get a little cookie and a mega packet of sugar. I say “mega” and I mean it. They could easily supply two or three coffees with a decent amount of sweetness. I assume that regardless of the style of coffee, it’s assumed that you will like it sweet.