Or in English, Fried Eggplant with Honey/Molasses.

Miel translates to “honey” but they are shortening “miel de caña” which is actually molasses. It has a lighter molasses flavor but is molasses nonetheless. If you would really rather use honey no one will stop you.

So it seems this dish originally came from the Middle East via the Moorish invasion, and has stuck around ever since then. Fried eggplant are common in Spain, I guess, but having them with molasses is more of an Andalusian thing. It’s also one of the more common dishes we see whenever we travel around southern Spain.

Every time we mention these on this blog or use this picture (above) we get lots of comments from people wanting to know more. Well, we decided to take it upon ourselves to make these bad boys and they turned out freaking amazing.

The best thing about this dish is that you do not need any Spanish specific ingredients to make it. Many other dishes we’ve made (Canary Stew, Artichokes & Pine Nuts )call for Spanish chorizo, or Iberian ham, two things that are tougher to find in the US. As long as you can locate the molasses in your local store, getting the ingredients together should be a breeze.

This recipe is worth it because it’s an interesting flavor you would’ve never thought to pair together – it goes well with beer or as a side dish to complement something spicy, salty or garlicky.

Note: The amount depends on how much you want to make. 1 eggplant feeds 2 people as a side dish or snack.

It will take about 5 minutes to prep, 1 hour of waiting, and 10 minutes to cook.

You can peel the eggplant if you’d like. We kept the peel on because we don’t mind it. To each their own!

Cut the eggplant into strips about the size of a french fry. We’ve also seen these cut into disk shapes, but the fry shape is probably the best.

Coat the eggplant fries with salt and leave it in a colander for 30 minutes. Do this over a sink or bowl because it will drip.

Don’t use too much salt, but also make sure there is enough salt to lightly coat it. This should get rid of the extra juice inside of the eggplant. Don’t worry though, because you’ll be replacing it with something better in the next stage.

Move the eggplant from the colander into a bowl, and fill with beer. Soak the eggplant in the beer for an additional 30 minutes.

We used Cruzcampo, the most Andalusian beer there is. It’s more of a pilsner than a lager, but honestly I don’t think it matters. Go ahead and use whatever you’ve got!  We’ve seen recipes that call for using Gaseosa (basically 7-Up) instead of beer, but I think that would make the end result too sweet.

Drain the eggplant and pat them somewhat dry with some paper towels. You want the eggplant to remain damp enough to coat with flour in the next stage.

Put some flour or finely ground breadcrumbs in a bag. Add the dry(ish) eggplant and shake. You want the meat of the eggplant to be totally covered with a fine layer of whatever breading you chose. (I couldn’t get the crumbs to stick to the skin of the eggplant, so I just called it quits. If this happens to you, don’t fret!) 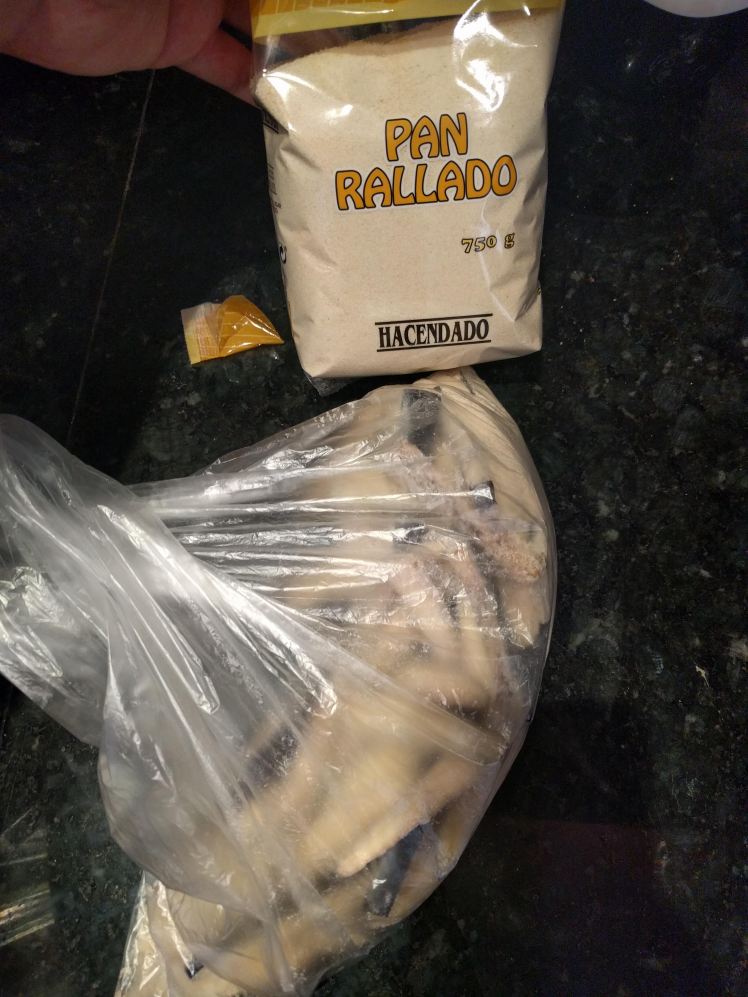 Take a pan and add enough oil to just about cover your eggplant pieces. Turn the heat up until the oil is nice and hot. Add a test piece of eggplant if you want, and when it starts sizzling you’re good to go. Turn the heat to medium, and add as many eggplant sticks as will fit, making sure you only have a single layer.

When the eggplant are sufficiently golden, remove them from the pan and place them on a bed of paper towels to drain the oil.

When you have fried all your eggplant, throw them on a plate and drizzle them lightly (or heavily) with molasses. 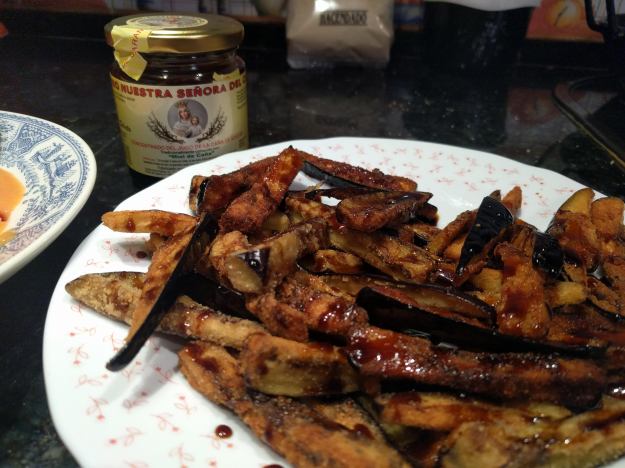 We had ours as a side to a bowl of salmorejo (kind of like gazpacho). Anything salty or garlicky will go great with these.

So there you have it! A simple side dish or appetizer anyone can make!