We had to drive on the freeway to get from outside of Cordoba to the Baños de la Encina. I took as many pictures as I could of the street signs – with the 120 km/h signs, weird merging signs and off ramp warnings. Some things are universal – like the deer crossing – but most things are totally different.

They also have the littlest cow ever as the “beware/yield to cows” sign. He’s got wee little legs. Stubbly little cow.

We got stuck in traffic – because of course we did. We were delayed for construction, of which they were actually packing up to be done for the day (siesta). So because they hadn’t taken the signs down yet there was traffic but no actual construction.

We were worried about our appointment with our next castle. This is a famous and very well preserved castle – but you can’t see it without arranging ahead of time. 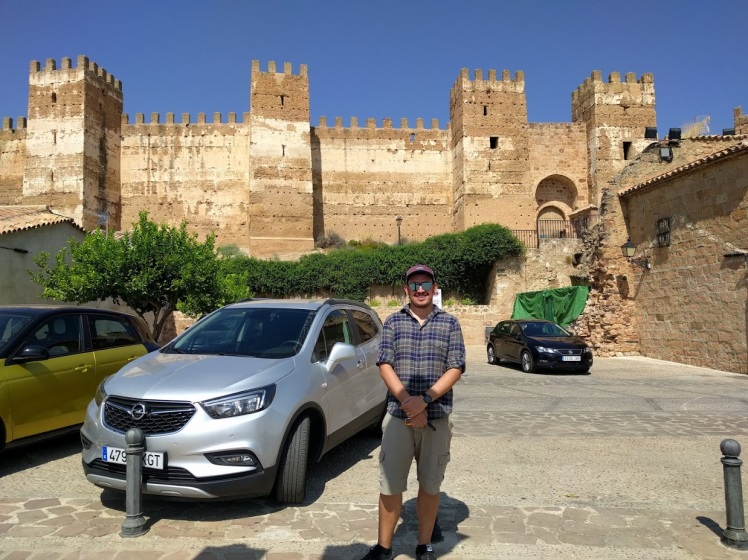 We arrived exactly on time but the tour guide was, of course, 20 minutes late.

Most Andalusian cities pride themselves on being “pueblos blancos” white villages. This city was different. The buildings were made with stone and looked far more quaint and medieval. 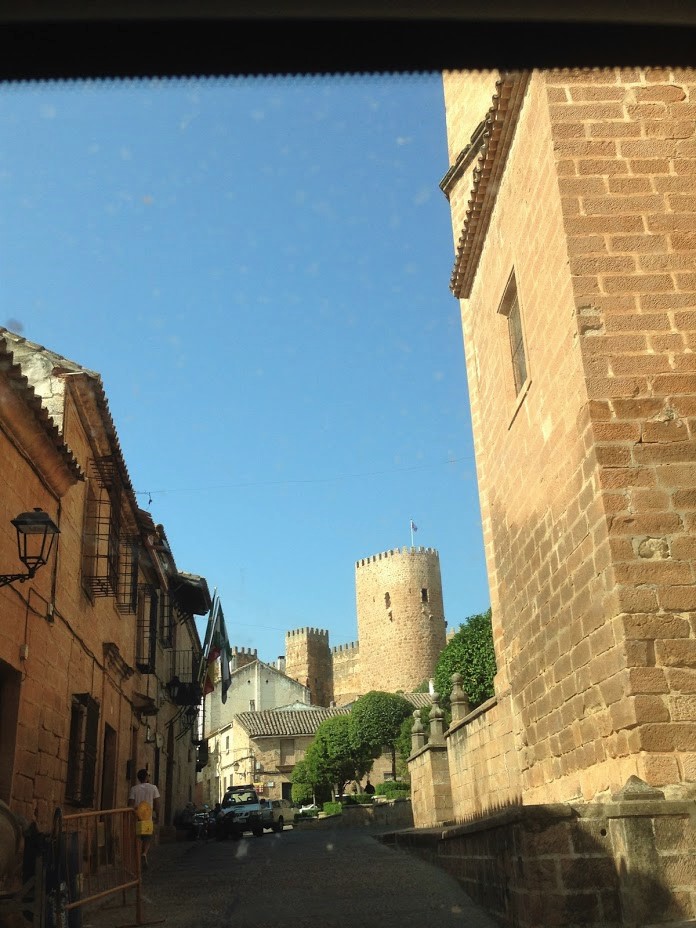 The tour wasn’t private – we were part of a large group who had arranged for the same time. Mostly it was one family with crying children and naughty toddlers. Their shouting made it difficult for us to hear the rapid-fire Spanish of the guide – so we had to double check our facts online before writing this.

Like everything else here, it was a Roman settlement that was then was built over in the 10th century by the Moors. The Moors made it the way they made many other castles we’ve seen. They would pack dirt, rocks and calcium into a box and press it down (basically making their own sedimentary rock-blocks). This was basically their version of concrete. The blocks would be about as tall as your arm is long. Then they would place the bricks down. The holes on the wall show where they would’ve put wooden posts so they could stand on them while they built upward. Each hole (from the sticks) is, again, about as long as your arm. 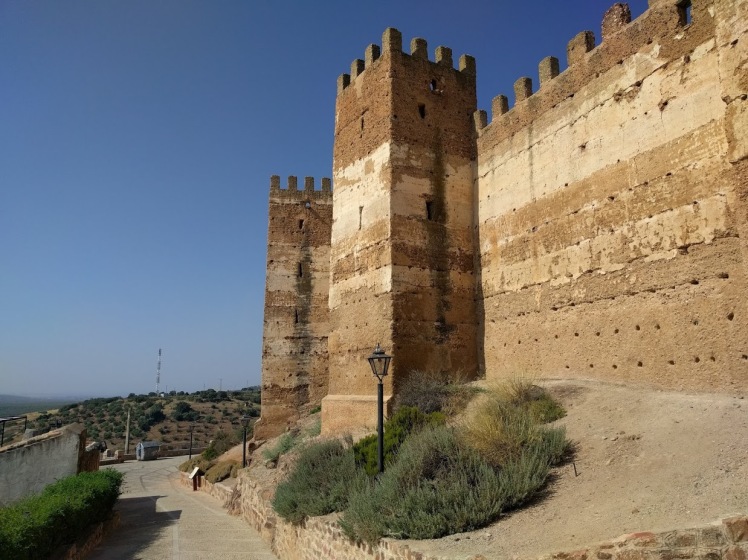 The Christians eventually took the castle and built onto it. So there’s a part where it stops being packed-bricks and is made with rocks and mortar. 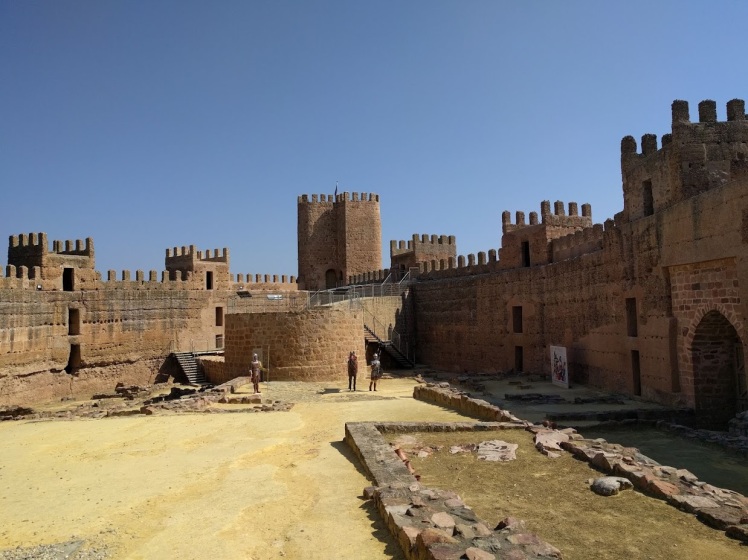 There are 14 towers overall around it. It also housed 7 different kings over the years.

The whole inside has housed Roman, Moorish and Christian cities. There are scars along the walls from roofs and buildings that have been packed inside the fortress for centuries. Today it is the best preserved Moorish castle in Spain. 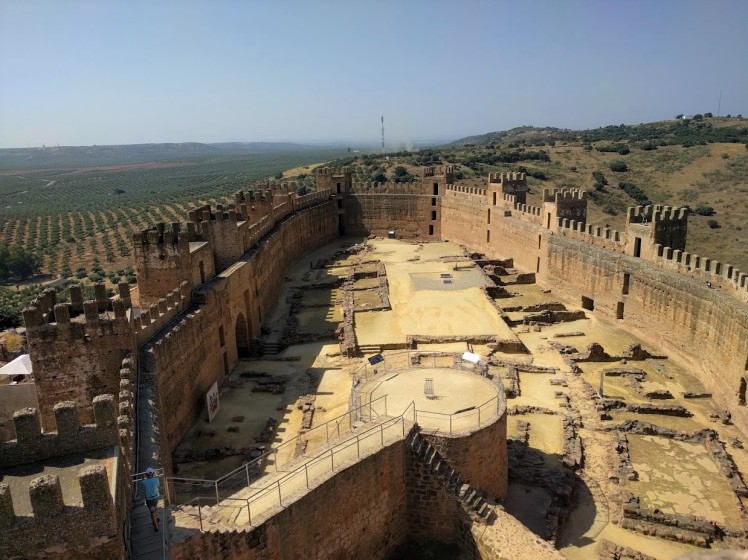 Interestingly this castle didn’t see battle in the Reconquista. It was given up after the Battle of Navas de Tolosa – one of the biggest battles of the Reconquista (and the major turning point of the ~1000 year war). We wrote a little bit about it in our post about the knights of Calatrava.

This battlefield is a little bit controversial. Their facts are as accurate as they can be for something that happened in 1212 (806 years ago). But people still get pissy over what side did what and how many people were actually there.

The museum was laid out really well. It started with all the major reasons for the war and all the major leaders printed on gigantic tapestries. 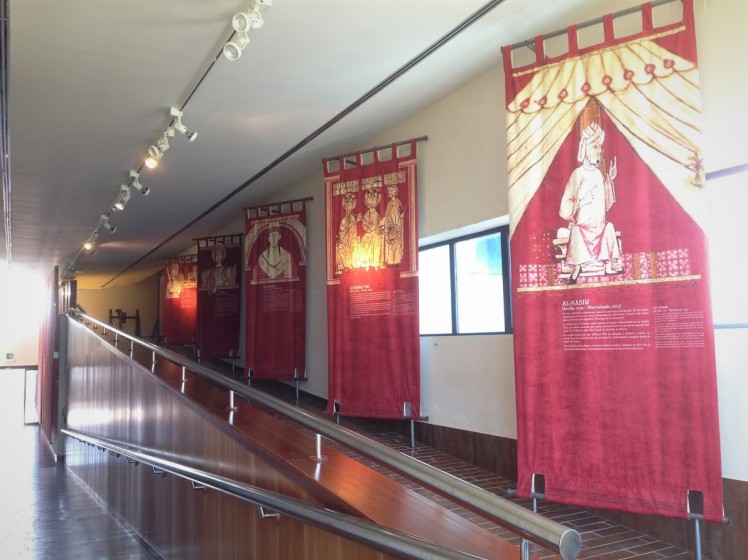 Then there was a room that explained all the different kinds of people who fought and what kind of weapons they would’ve used.

Finally you can climb a tower and look over the battlefield itself. 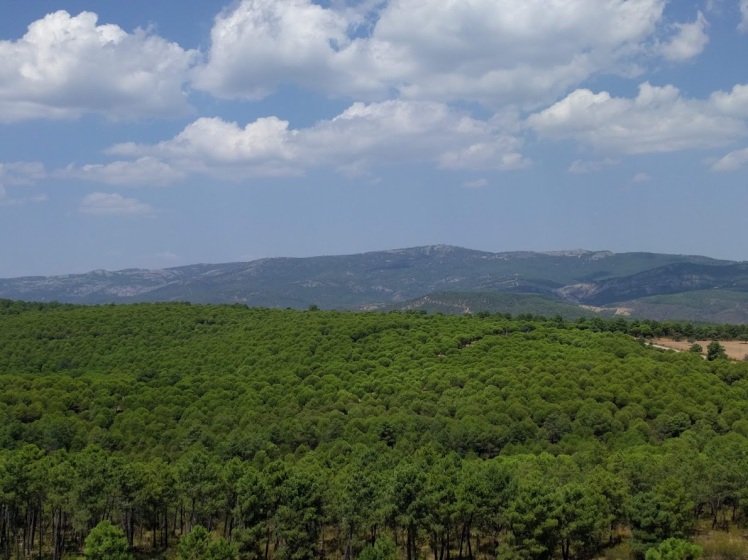 It’s about 20 miles away hidden under a huge forest because, you know, it happened 806 years ago. This isn’t Gettysburg or another battlefield in the USA where survivors actually walked around and said “yup, here’s where we got bogged down.” This battle probably happened in this general area. This guy’s diary says there were X people while someone else says X many people.

We planned on heading directly to Cazorla but the biggest olive tree on earth was only 5 minutes out of our way near a village named Arroyo del Ojanco. So obviously we had to go there. Unlike kitschy American roadside attractions (“Biggest Rubber Band Ball NEXT EXIT!!!!!”) the tree has absolutely no signs or advertising. We had to use a GPS to actually find it’s exact coordinates because the owner of the tree doesn’t want to make it a touristy thing. Not that he minds people looking. 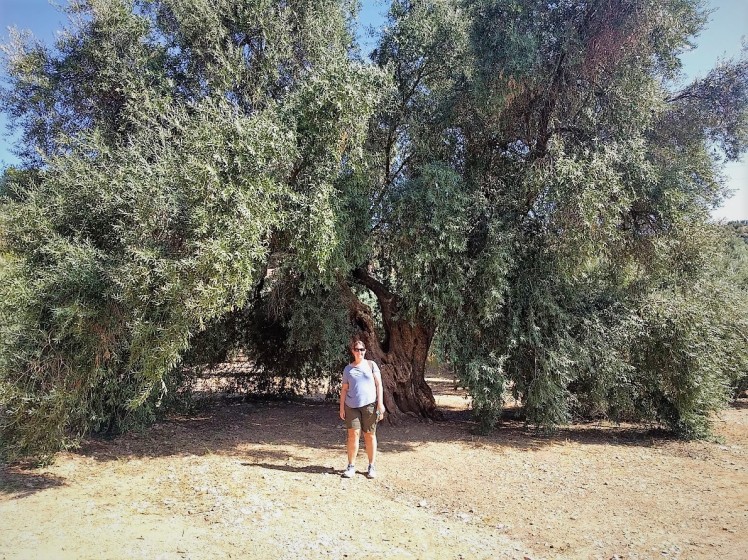 God knows he already gets enough money from the tree, though. The average olive tree produces about 80 kg (176 lbs) of olives a year while this tree makes 850 kg (1,873 lbs). Daaaammmmmnnnnn. The branches were positively overloaded, to the point they were touching the ground from the sheer weight of one thousand pounds of olives.

It has been declared a “natural monument” by the government, but that’s about it for its fame. It is probably the oldest in the world, as well as the biggest – but no one knows how old it really is – so they can’t say for sure. Rumor says it was planted around the time of the conquest (not reconquista but actual conquest). So more or less 700 AD. So that’s freaking old.

Our last stop for the day was Cazorla National Park. We’ve tried to go here about 4 times and have even booked hotels but strange cancellations, strep throat, and bus delays stopped us from going. With our own wheels, though, we were unstoppable. So we finally made it to a place we’ve been trying to go for 6 months.

The drive in is practically a one-track road with everyone driving in the middle out of fear and incompetence. It was a tense drive, with every car that passed you making you brace (a little) for impact. Fortunately no one hit anyone else- it was just a little nerve wracking.

The views were gorgeous with an artificial lake in the middle of a huge valley. The color of the water was positively unreal. 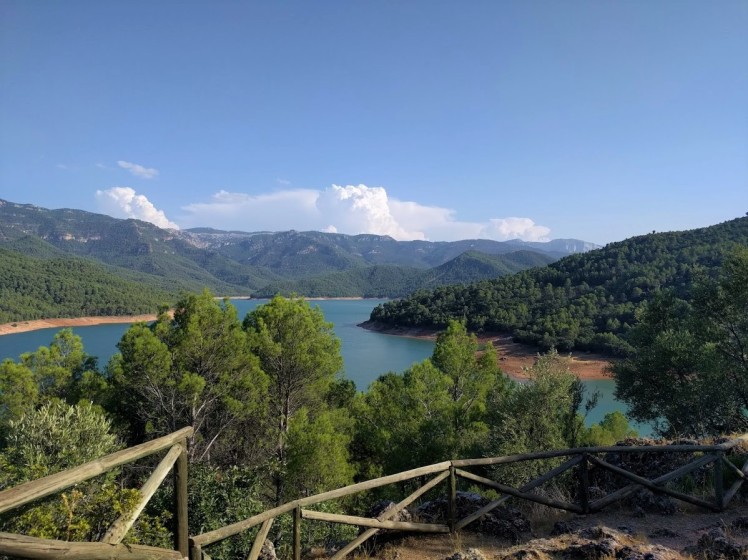 We stayed in a podunk little bed and breakfast. The man was about as hick as a Spaniard can get. He had 70s facial hair and a swarthy voice. As we approached his home, he was standing topless on his porch smoking a cigarette, paying no mind to us. “Is this the XYZ hotel?” Sure is, he flicked his cigarette then asked us to wait while he put on a shirt. We were in the country, now. He had a rabbit, 2 dogs, probably 15 cats and at least 30 parakeets. All of which were vocal and sweet. His land was, of course olives. Obviously.

We settled into our apartment and feasted on a jar of local olives that we’d purchased in some village we passed through earlier. The sky was so clear that we were able to see the milky way, and the breeze was so cool that we didn’t need to use air conditioning. It felt good to be back into some mountains!