We are leaving Jaén soon, and are starting to feel a little sentimental. So while we are still living here we thought it would be a good idea to cook a local recipe!

This dish isn’t exactly a stew, nor is it a soup. It’s some kind of strange hybrid that is super common in Spain. Basically it’s a stew that you condense down into a sauce. The general flavors of this dish (onion, peppers, tomatoes, garlic, and saffron) give you the best representation of the typical “Spanish” flavors, while the mint and cumin add a good amount of North African exoticism.

Translating our cookbook’s description of the dish, it seems that this dish was common with working people or people on the move. Farmers, ranchers, and travelers back in the day might have carried some flour on them, but they wouldn’t have had an oven to bake bread in. The solution these people came up with was to mix the flour with a bit of water and rip the dough into scraps, then to cook those scraps in their stew. This gave a heartier and more nourishing (caloric) dish that kept people going longer. It also adds a fun texture.

And it’s a good recipe for us to post because all of the ingredients can very easily be found in any US grocery store. The only problem you might have is in getting saffron, but only because it is super expensive. Unfortunately saffron is one of the more dominant flavors in this dish (and most other Spanish dishes), so it’s difficult to work around not having it. If you don’t want to drop the $$ on saffron you can use…I don’t know… Coriander seeds? It will change the flavor of the dish, but coriander seeds are also common in North African cooking, and they will add some extra flavor. 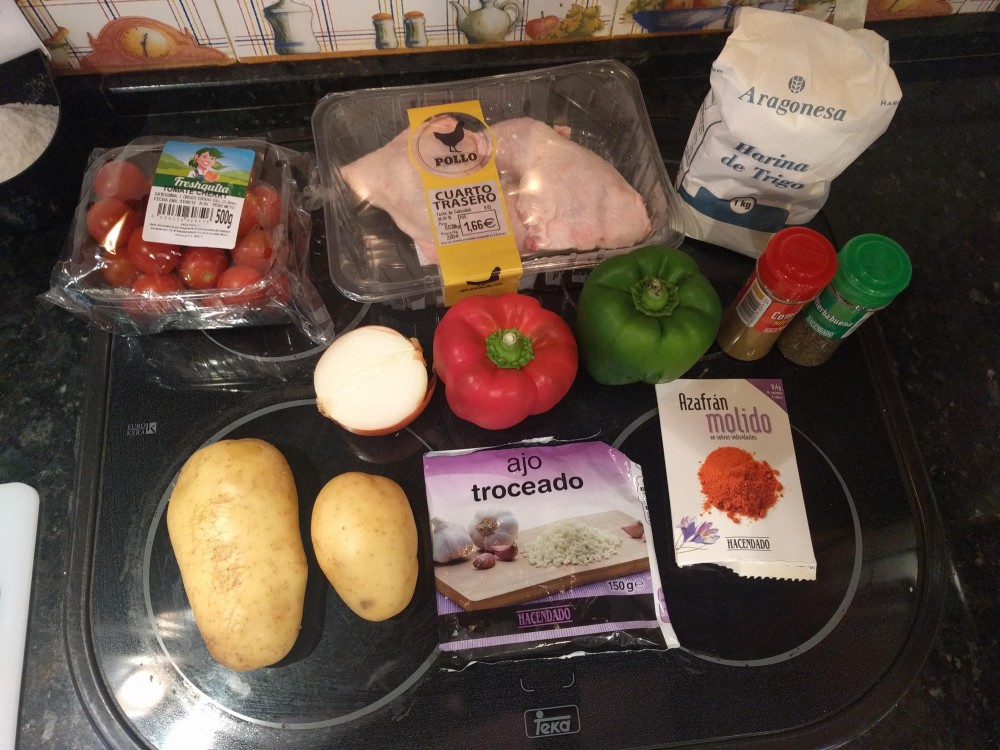 Get started on the Andrajos. Mix the flour, salt, and water together until you get a dough that does not stick to your hands. Keep adding flour until you get the right consistency. Set it aside.

Heat up some olive oil in a pot, add the chicken and brown it evenly on all sides. You can take the skin off or leave it on, as you like. Once browned set it aside.

Dice up the peppers, onion, and garlic. Add them to the same pot with the oil you used to fry the chicken. Here is where you can decide on the consistency of your stew. Do you want it chunky? Then chop the veggies into larger pieces. Do you want it smoother? Chop them smaller.

Chop up your tomato and add it to the peppers and onions. The recipe that we followed didn’t mention this until it was too late, but the tomato should be peeled. We didn’t care, so we added them skin and all. Saute this for ten minutes until the tomatoes have broken down. Congratulations, you have made sofrito, the cornerstone of Mediterranean cooking.

As the stuff above is sauteing, peel and cut your potatoes into semi large pieces. They will have lots of time to cook, so you don’t want them to be so small that they dissolve. Add the potatoes and saute for up to ten minutes. Our book tells us that this lets to potatoes cook up better in the sauce, and lets them absorb more of the flavor.

When the potatoes have been sauteed with the vegetables to your liking, add the chicken. Cover the entire mixture with about 1 liter, or 4 cups, of water. Just enough to cover all the ingredients. Add the mint. You can chop the mint and let it stay in, or you can add the sprigs whole and remove them before serving. We used dried mint, so we didn’t have to make this decision. Let this simmer for 20 minutes, without the lid.

Our cook book got extra fancy around this stage. It called for the saffron, cumin, salt, and some bonus garlic to be put into a mortar and pestle, and ground together. If you are average, like us, just do what we did and…

Add the saffron, cumin, salt, and some garlic powder to the stew. Let these new spices simmer for an additional 20 minutes. If you are losing too much water, get a lid on there. In the end you want it to be wet enough to eat with a spoon.

As the food is simmering turn your attention back to the andrajos. Take half of the dough and roll it out on a heavily floured surface. Roll the dough out until it is super thin. Then repeat with the second half of the dough. Take the dough sheets and start tearing them into smallish squares with your hands. They most definitely do NOT have to be perfect.

Add the dough to the liquid food stuff. We had to remove the chicken to make sure the andrajos had enough liquid to boil up properly, and to avoid having them all clump together.  Our book says to simmer them for ten minutes, but they pretty much cook instantly. Our advice is to simmer it until you are reasonably sure the andrajos are fully cooked. They should also absorb some of the liquid, so make sure you have enough to allow for this.

Normally you’d have some toasted bread alongside a dish like this, but since you already have the andrajos it’s not necessary. 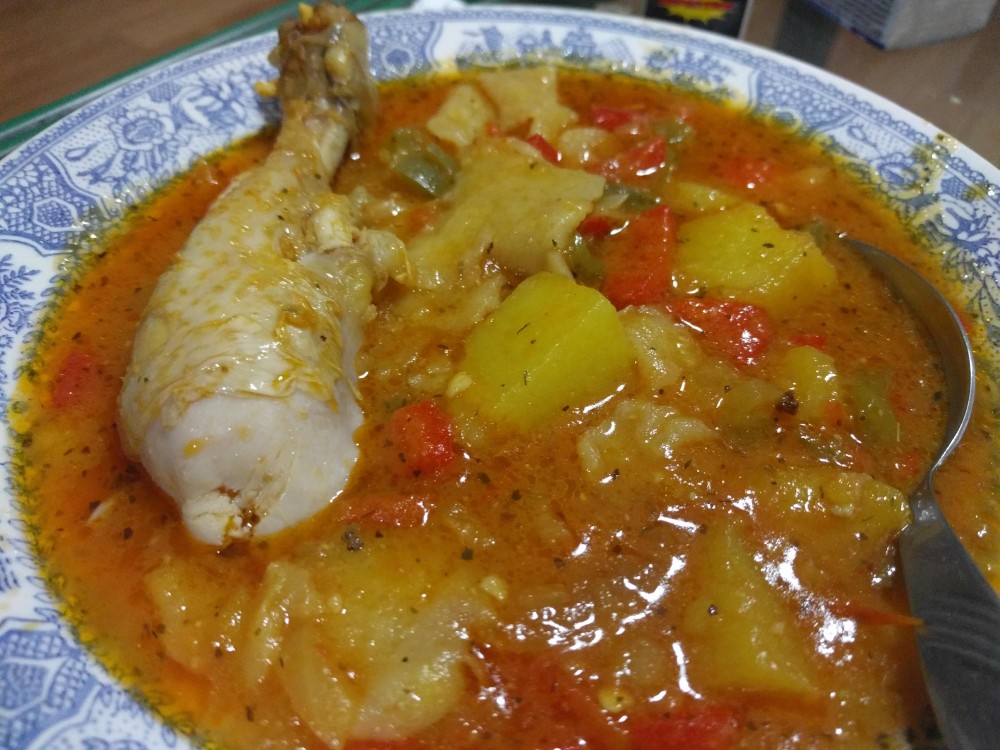