We arrived in Vienna at 2 pm (they actually call it Wien hence Wiener Schnitzel, but we’ll call it Vienna).  We’ve been in the Mediterranean for a while and were quite surprised when the sun started setting around three, since the sun doesn’t set in Mallorca until 6 pm. We were losing almost 2 hours of daylight! We had to go from the airport to the city, then from the city to our apartment rental. By the time we were checked in, settled and ready to go out it was getting dark.

Our apartment rental was in the former Jewish district (which was actually still pretty Jewish). I use the word former because there were many “Stepping Stones” in front of buildings. Stepping stones are little brass plaques inlaid in the sidewalk/cobblestone that say how many Jews (or other political dissidents) lived in the building before they were deported and destroyed by Nazi Germany. It’s chilling to walk by multiple because it means large families lived in the building – one building near us said 144. It has their names, dates of birth, date of death (if known) and the camp they were deported to.

The apartment we were staying in had one big stepping stone and 4 aside it. 24 people were deported from our very building. Counting the mailboxes inside we estimate that was the whole building. The big stone says: We remember 24 Jewish women, men and four children who lived in this apartment complex before they were deported and murdered. 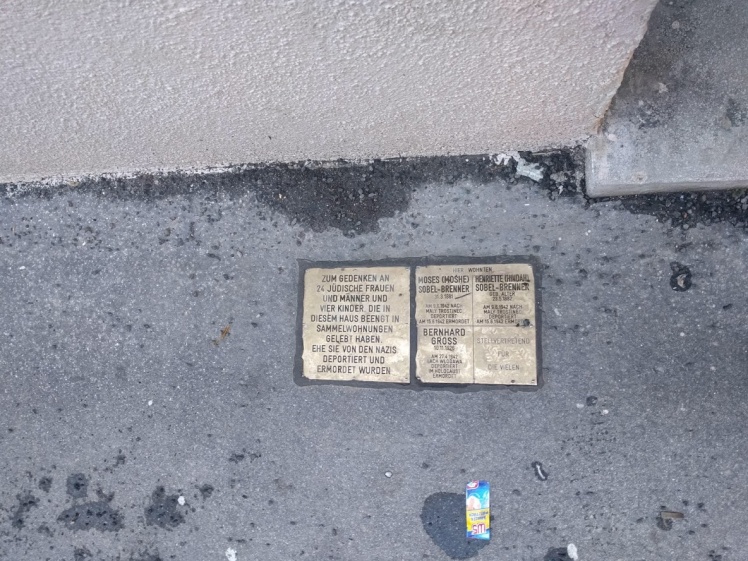 *Wlodawa was a ghetto in Poland. Most would’ve been deported to the nearby Sobibór camp but there were also nearby work camps. The ghetto conditions were also terrible enough. Towards the end of October hundreds escaped into the forest and many joined the Jewish resistance forces. It’s worth noting that no one knows what happened to 16 year old Bernhard Gross – he could’ve been one of the “hundreds” who escaped and joined the resistance. The stepping stone only says “murdered in the holocaust” because no one knows where he ended up after Wlodawa.

The stepping stones are absolutely worth a closer look – even their names are a play on a an anti semitic word.

There’s no real easy way to transition from all that but it’s worth talking about. So, back to our day:

We hadn’t eaten very much at all – airport prices, am I right? So we headed to a Christmas Market. The internet had said many were closing on the 23rd so it was our last chance. Luckily there were 4+ that were closing that night. We headed straight for the Alt Wiener Christkindlmarkt literally Old Vienna Christ Child Market. Yes it was amazing to speak German again, thanks for asking.

We each had a glühwein – a mulled wine served in a collectible (or returnable for your deposit back) mug. Back in 2012 when we lived in Germany the cups were pretty average. Now they’re all getting more and more unique. Bigger cups, taller cups, embossed words, better designs or even shaped cups – shaped like a pig (for the new year Glucksschwein luck pig). We did end up keeping one, our only souvenir from Austria.

We got a Chimney cake, these are more traditional in Hungary but we went for it. They take raised dough and wrap it on a big stick then roast it over a fire. They slip it off the end so it is a hollow tube. The American in me votes to fill the inside with cream or icing but they don’t do that. They spin it around in crushed nuts and sugar while it’s still hot so the sugar turns to a crunchy glaze. It’s easy to eat and share because you can just break a ring off the side.

Alt Wiener had a barbershop quartet singing traditional songs (lovely) but not much food besides the chimney cake. So we headed to Weihnachts Markt Am Hof. Hof means court/yard/courtyard/square and is a common word on hotels, palaces and restaurants. In this case hof is referring to the city square.

This one had loads of food but it was dark now and people were coming out en masse. We got a pumpkin cream soup served in a fresh bread bowl. I don’t think I have to even say the bread was fresh, German-based cultures are all about bread and their bread puts everyone else’s bread to shame. Of course it was fresh and flaky and bubbly and soft with the perfect level of crusty edges. Duh. The pumpkin cream soup had pumpkin seeds and a drizzle of balsamic vinegar on the top. It was wonderful.

Vienna is more expensive than where we used to live in Germany so we had a little bit of sticker shock and just opted to share everything. We shared the chimney cake, we shared the soup. Then we went auf dem jagd my favorite thing to say in German – on the hunt! – for more food. We found sausage. Not your average sausage, a cheese filled sausage. Made fresh and fried in bacon grease. German/Austrian sausages are always so chock full they burst open when you take the first bite and they make a crunching sound like an apple. God how I’ve missed non-Mediterranean food. Sometimes you just need to stop eating fresh tomatoes and fresh oranges and just eat a sausage so filled with grease it runs down your face. Not quite satiated we headed to get a raclette. A friendly, 6 foot 5 (I swear that’s the average Austrian man’s height) bent down to melt a wheel of cheese. This is literally the raclette – a hard-ish cheese made from Alpine cow milk (usually Swiss). It’s put under a heater until the topmost centimeter gets melty then you pour it from its wheel onto a piece of toast.

It is spread around evenly and fresh ground pepper is added.

We shared this too and finally we were done. The crowds were too thick to enjoy anything anymore (it took nearly 15 minutes to get the sausage). Also our pockets were lighter. A 3 course meal at home city would’ve been cheaper than a few snacks here. Not anyone’s fault, Vienna has a nice quality of life that cheap-ass, student-visa folks like us can’t exactly afford.

Everything was very upfront with countless signs saying “we will be closing at 3.” Christmas Eve is where the party is at for Austria so things shut down at 3. We needed to go to the store and get our own Christmas (Eve) food since many restaurants would be closed or with reservation only. Breakfast was two very tiny pastries and a cup of coffee for 10 euros. Yikes. We added “breakfast foods” to our grocery list.

Between two bottles of wine, cold cuts for breakfast, and a family pack of sausage to last us the rest of our time we spent 60 euros at the grocery store. Again, yikes. We’re more accustomed to Spain prices where we can get a bottle of wine for 1.89 and a week or mores worth of groceries for 60 euros. Here it was 3 days’ worth.

We went shopping at a couple drug stores to look at fun stuff. We also just looked around at all the beautiful buildings.

Also Vienna only lost 1/3rd of their buildings in World War Two (I say “only” because other cities like Dresden and Berlin lost around 75% of their buildings). It makes things look interesting because you will see gorgeous buildings aside of one or two rapidly-built post-war boxy apartments. But only 1/3rd of buildings are these boxy bits. And some people have taken to painting beautiful murals on them to spruce them up a bit.

Believe it or not, this is not two different photos, these buildings are side by side. The post-war boxy building with some paint next to its neighbor which wasn’t destroyed in the war.

We got hungry taking in all the art, er, architecture. Unfortunately many restaurants were all already closed – and not just because we’re posh pseudo-Spaniards who eat lunch at 2:30. No, everything was shut early or had never opened at all. We ended up going to a Döner restaurant – Döner (or Kebap) meat is packed on a stick and spun on a heat lamp all day and all night. At 2 am when folks are drunk it’s still spinning. They take a razor and shave pieces off and add taziki sauce and veggies. It’s on a flat bread or inside a tortilla. The seedier the better for döner restaurants. Somehow we found too posh of a place because it was dry, there were too many vegetables (it’s not called a lettuce kebob) and no sauce. Most lackluster döner ever.

It was 3pm which meant Christmas Eve had officially begun. We saw St. Stephen’s Cathedral before we headed back to the apartment. We would’ve gone inside if we could’ve seen the horrific crypts but they’re not open this time of year. The crypts below have the remains of 11,000 people – mostly plague victims. Prisoners were sent below to scrape the putrid flesh off and arrange the bones into stacks. Aside of that is the royal crypt where not only former royals are buried but 60 jars of their organs are stored. Why? No idea.

At 4pm on Christmas Eve the main radio station plays Silent Night (“Stille Nacht, heilige Nacht”). This is tradition in Austria because the song was written here in 1818. This year was actually the 200th anniversary of the song’s existence. It’s been translated into 300 languages, Bing Crosby is obviously most famous for singing it, and it’s on the UNESCO list of intangible cultural heritage. We tuned a broken little radio in our room for a while until we realized that phones can actually just play radio stations. So we listened to Silent Night in the dead quiet apartment complex on a dead quiet street where many others were listening to it at that exact moment; in the country where it was invented; 200 years after it was first performed.

For dinner we realized we accidentally bought an aspic. For those who don’t know or have suppressed the memories of 1950s cuisine, an aspic is a savory gelatin monstrosity. In our case it was potato, egg and tuna salad suspended in a sickly-tasting filmy gelatin. But luckily our family sized pack of sausage filled us up.

We had to go to bed early because we were going to use our museum pass for the next three days. And if you remember last year’s Christmas: when we get a museum pass we go hard. Never rest, never surrender, see as many museums as physically possible and then collapse.

4 thoughts on “Our Viennese Christmas”