We had made reservations months ago to go axe throwing at noon. The idea being that we would get an axe throwing lesson, and then get to throw axes at wooden targets for an hour.  We woke up and headed to a waffle restaurant for breakfast, but it wasn’t open until 10:30 (ominous foreshadowing). So we settled on a different, less waffel-y breakfast. We then walked 1.7 miles to get to the axe place at noon, but it was closed. We waited for 40 minutes…and nothing. Shit. We asked around, were told to try the back entrance, but we found nothing. Thank god we hadn’t paid in advance, we would’ve been forced to wait longer in the nearly sub-zero temperatures to see when they were finally willing to open. So we went to the nearby park and enjoyed all the dogs running around. Budapestians definitely have some cute dogs. Axe throwing and waffles were basically the big plans for the day so we were feeling a little bitter, but watching the dogs calmed us down.

After enjoying some dogs we headed to a local restaurant where they barely spoke any English and we were the only tourists. Our waiter, a tattooed, sharp featured man glowered down at us and made us feel very bad about being there. This was similar to the reviews we had read online of all the people being very cold and rude. But watching him changed our perceptions of this stereotype. Two merry old ladies were lunching together and one just kept giving the other one gifts. It was hilarious, as soon as her friend opened a little tissue paper package the other would produce another and another and they got to giggling over it. The waiter was watching, stone faced at first but he too started to smile at their mutual joy. This was our experience in Budapest. Almost every review online talked about “asshole waiters – will never go again!” But I think they’re just a little aloof. 20 years ago they were behind the iron curtain, now they’re one of the biggest tourist destinations. Everyone has been forced to learn English quickly to communicate with all the tourists and I think everyone is a little nervous about it all the time – suddenly being in the tourism spotlight. They’re swimming in tourists, so they don’t have to kiss anyone’s asses either to ensure people will return time and time again. From 2006 to 2018 their tourism has increased by 10 million tourists. They’re probably a little exhausted by it all. I don’t think anyone was really cold or asshole-ish like all the reviews online had said.

Back to lunch. Something we do before we go to new countries is make a little BINGO. There are usually so many neat foods and drinks to try, that it would be impossible to remember them all. So we usually make a bingo and bring it with us everywhere we go. Whenever we try a local candy, a new beer, or a dish at a restaurant we get to mark it down. It helps ensure that we don’t just fall into a food rut, and it forces us to take chances.

The food at this little restaurant was amazing. We could talk about it here, but we have a special post about the food we ate coming up soon!

So feeling better about our previous failures we went back to the park and went clear to the other side to see Vajdahunyad Castle. Around the back fo the castle there was a Christmas market. We walked through, too stuffed from lunch to really stop, but it was gorgeous and looked better than any of the ones in Vienna.

We walked to a place called Heroes’ Square, a national monument dedicated to the seven chieftains of the Magyar tribes (ancient Hungarians), some other national leaders, Memorial Stone of Heros (Tomb of the Unknown Soldier). 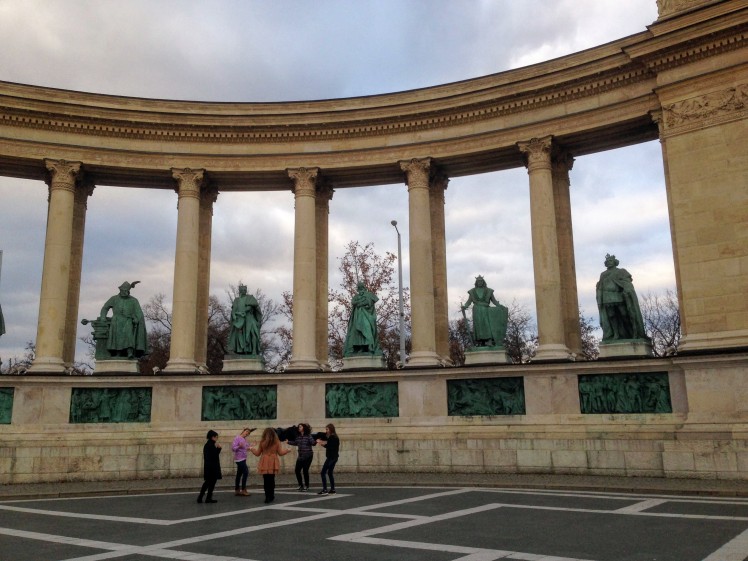 Aside from the normal tourists there were groups of teens dancing to Korean pop music, we can never get away from it. Hooray globalization!

After walking around the city some more, we decided to end the day with some Thai food. It wasn’t on our bingo, but it was cheap and easy.

Today was all about pinball.

Budapest is home to a very magical museum honoring pinball machines. It might sound boring at first, until you realize that it’s more of a pinball arcade than a museum. The machines all have informational boards telling you where they were built, who designed them, and what year they were made. The newest machines were from the 2010s, while the oldest were from the 50s. We counted something like 80 machines, and dozens of retro arcade games from every year. It’s all packed into a really cool old-fashioned cellar. It cost about 10 Euros to enter, but after paying the entrance fee you can play any game for free.

The hours just flew by here. We loved every second of it, and would honestly fly back to Vienna, take a train to Budapest all over again, just to spend some more time here.

This was New Year Eve. People were rushing about, getting things ready for the big night, and we were just content to relax. We went to a mall, which was a bit of a bust. Then we ate some Mexican food at Arriba Taqueria. It’s hard to get Mexican food that is even “OK”. And this place was much better than just “OK.

We went to the grocery store and did what everyone else was doing. We bought booze and ramen noodles. It was an absolute madhouse, and we stood in line for what seemed like forever.

New Years in Budapest is not celebrated the way you would think it would be. There are no large fireworks displays and some of the bigger bars close down. Instead the entire city becomes a gigantic block party, with everyone drinking and setting off fireworks in the streets. We knew this before we came, but we had no intention of joining in. Instead we drank our booze, ate our ramen, and played Yahtzee like cool people.

We figured that everyone would be hung over and that this morning would be dead silent. And we were counting on this so we could go enjoy the city center in peace. But apparently everyone else had the same idea. So we walked about a bit enjoying the architecture.

We crossed the bridge (from Pest to Buda), climbed up Castle Hill, fighting crowds the entire time. We saw Fisherman’s Bastion, and enjoyed an amazing (though overcast) view of the city.

But today was a bit of a drag. There were just too many people, and everything was still closed. It was a drag at least until we walked ourselves to the other side of town and discovered one of the greatest restaurants of all time.

But again, we have a separate post for that.

This was our day to do all the museums and things that we had thus far avoided. The New Years tourist crush was starting to lessen, so we figured that things would be quieter. We retraced our steps from the day before until we found the entrance to the Hungarian National Gallery, an art museum with tons of Hungarian art throughout the ages. But WHAT DO YOU KNOW? It was closed. Every single time we go anywhere, a restaurant, museum, or what have you, we check online to see if it’ll be open. But we still ran into sooo many surprise closures in Budapest. So we weren’t even surprised at this point.

We figured the museum next door, the Budapest Museum, would also be closed, but as luck would have it was open. So we at least got to enjoy a museum about the history of Budapest. We actually double lucked out since we found a secret back door, so we didn’t even have to wait in line to buy our tickets.

This museum was pretty cool. At first it showed the ruins of the original medieval castle and how it was built over later on. Then it showed how much of it was destroyed in WWII (all of it), and how they had reconstructed it.

We learned about all the sieges the castle had suffered through and about the Mongolian invasion (basically the entirety of Hungary was burned down). There was also a climate controlled room with things they recovered from a medieval city well. There were shoes, coins, parchments, and banners. It was really interesting to see what basically amounted to medieval trash.

The upstairs was more baroque style palaces from Hapsburg times, and we were getting tired so we skipped that.

After walking down castle hill we went to the central market, and then immediately realized that we hate markets, so we bailed. They look nice, but what are we going to do at a market, buy fresh produce? And combined with the crowds of shoppers and tourists? No, to hell with that.

So we walked some more and eventually found ourselves in the Hungarian National Museum, which was just about the history of Hungary.

We loved this museum, and learned a ton. But for whatever reason we didn’t take many pictures.

This apparently caught our eye, it was an example of Hungarian production during the 60s-70s.