After spending so much time in the capital getting jostled about by tourists we decided to get out of town for a bit.

We did this with more than a little apprehension. Setting aside an entire day for a day trip while on vacation is a bit risky. It’s like planning a vacation while you are on vacation. It’s not easy to do, and if it doesn’t work out then….damn, you just wasted an entire vacation day.

There are many places close to Budapest that can be easily visited, but we had pre-chosen Visegrad because it just looked super cool. The other cities had palaces, churches, and markets. Yawn. Visegrad had a castle. And better ye, a medieval restaurant. Not like an old restaurant that has survived from medieval times, but a straight up paper crown, lute and harpsichord, children’s birthday party, family restaurant. More about that later.

The only negative was that the train station was on the other side of the damn Danube river. So to get across the river you have to take a ferry, but good luck finding information about that online.

So our trip started with us getting to the train station, buying our tickets, finding our train, and getting aboard with barely a minute to spare. It turns out that it wouldn’t have mattered if we had been late since the train wouldn’t leave for another 30 minutes.

After arriving in Nagymaros (the village across the river) we headed to the river, hoping we would find the ferry. While we were looking we were getting stared at by these two grizzled looking fishermen types. They were standing in front of a stand that possibly sold ferry tickets chain smoking and pounding beers, and we were nervous to approach them. We eventually did, and they turned out to be super helpful, telling us where and how to get tickets (on the ferry). 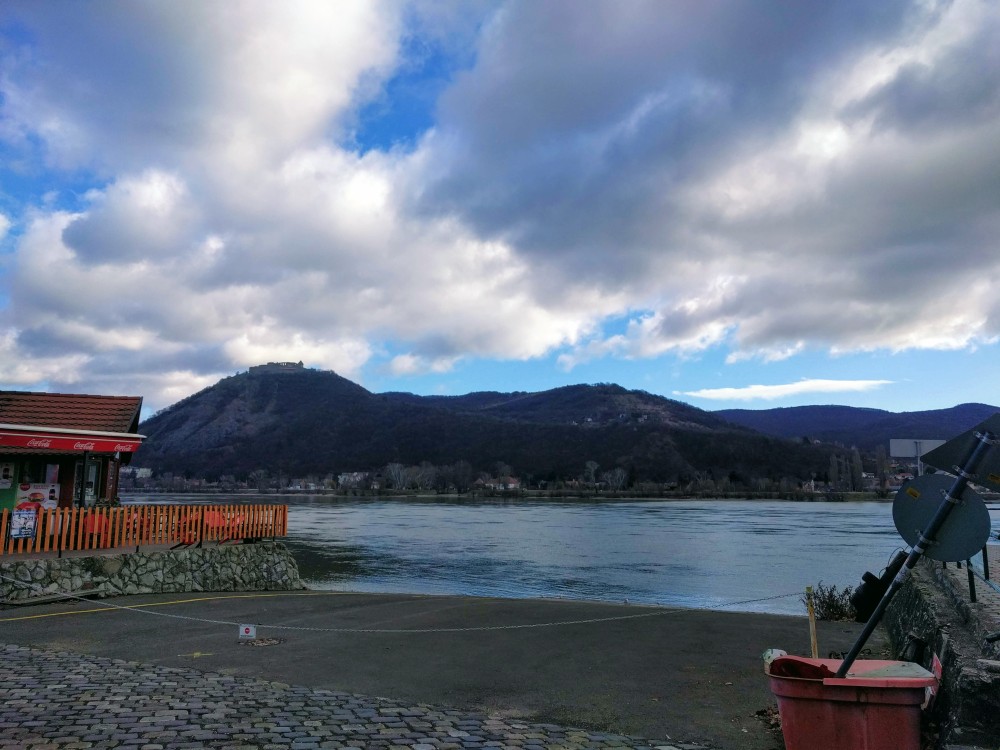 The only problem was that the ferry is scheduled to coincide with the train, and since we had been late we had to wait an hour for the ferry to come back.

So we waited, and it wasn’t the greatest. We were cold, a bit angry, and nervous that this was not going to work out. Eventually the ferry did come back, and we got across no problem. The village turned out to be mostly shut down, but it was still very pretty.

There were only a few cafes open, and we seriously considered getting a coffee then taking the next ferry back, but we really wanted that medieval food.

So we walked to the other side of the village, freezing cold, and thank the gods it was open.

So we enjoyed our medieval feast, served to us by a waiter dressed like a squire, checked on by the manager who was dressed like a king, with lute music playing over the PA system.

What does a medieval feast in Hungary look like?

Kaeti had a wild boar ragout (goulash) with dumplings, while Chris had a venison sirloin with fried potato cheese bread, smashed red cabbage, and a coffee sauce for the sirloin. We both got the lavender honey lemonade (Hungary really likes lemonade).

After feasting, and taking a paper crown, we set off to climb up to the castle.

The windchill brought it down to 26°F (-3°C). We haven’t been this cold in a long time, since Korea at least. But we kept moving up the hill because we really wanted to see this castle, but also because the effort was the only thing keeping us warm.

The website said that the castle would be open till 6pm, but you know how that goes… It was really closing at 4. This gave us just over 30 minutes to see it. So we did a speed run. We blew through all the rooms while briefly stopping to enjoy the views. There are only really three rooms here (not counting the wax museum). One room has information about the Hungarian crown, and the time this castle spent as the setting for the royal court. The next has a collection of hunting weapons and taxidermied animals from way back. The final room has a collection of medieval weapons and armor. None of these rooms were heated, so we shivered the entire time.

The views presented from the towers and walls were super pretty though (even though it was getting dark).

Eventually an employee caught up with us to tell us that the castle was now closed. So we made our way to the exit. The other guests got to get in their warm cars and drive back to town, but we  got to take the same hike.

At some point we were able to look down at the town and see that the ferry was docked on our side of the river. We had no idea when the last ferry would be, but we were torn because we wanted to see the local palinka museum. Palinka is a Hungarian fruit brandy, and it sounded like a good time (they had tastings!). So we made a deal with ourselves: If we missed the ferry we would go to the palinka museum, but if it was going to leave soon then we’d call it a day and leave. We found a schedule posted on a restaurant door, none of it was in English so we spent some time translating it to make sure it was A.) a schedule and B.) for the ferry. It was indeed, and we had 20 minutes till the next departure. It wasn’t enough time to go to the museum, so we decided it was safer to just quit while we were ahead. Sorry palinka museum!

We waited under a street lamp for 20 minutes, anxiously waiting to see if the schedule was indeed up to date. Eventually some more villagers showed up, and the ferrymen came out of the restaurant and got us on board and across the river in no time.

In the little train station I got to practice 2 of the 3 words I had managed to learn in Hungarian. “Ket, Budapest, Köszönöm”. (Two, Budapest, thank you). If you are curious, the other word I know is “egy”, which means “one”.  Naturally, the lady spoke English just fine, but I thought I’d at least give it a try.

Our train ride home was spent people watching. The guy across the aisle from us was proofreading a musical composition, the man in front of him was making a sign language skype call to a deaf friend, and a little old lady with hiking boots and a shopping trolly, who had been waiting for the ferry with us, was on her way to the capital for….grocery shopping, apparently. At night. In the freezing cold.

Dinner, for Chris at least, was a venison sausage. This is only interesting because it marks the first, and probably last, day that his entire day’s source of protein came from venison.

So even though we had been nervous to take a day trip, and despite a few hiccups, everything worked out in the end.