We just blogged about the who’s, what’s and why’s of Sant Antoni. But we wanted to talk about our personal experiences with the big Sant Antoni festival. As we said it was a whirlwind two weeks of absolutely fun nonsense. We tried to go to as many bonfires, communal barbecues, demon dances, and animal blessings as we could but it was too much. A single person could not see all of it.

3 weeks before the party started we went to the store to get our official gear. They were sold out completely of adult sweaters. They did have a great display that gives you a preview of the party – the demon and the barbecuing.

Just aside of this were some children’s books and coloring books about the whole event. Also all the special meats (for grilling) and the herbal liquor were on sale.

At my elementary school every student was wearing their sweater or was dressed as the demons. Like how elementary schools always decorate for Christmas, my whole school was decorated with demons, saints and bonfire drawings, books and displays. For music class they all sang the song. For art class they made books and displays. The bell usually plays pop songs but for 3 solid weeks it just played the Sant Antoni song on loop.

Two weeks before, on my way to school dirt piles began popping up. What happens is they pile big piles of dirt up in the neighborhoods then they stack all the wood up on top of the dirt (to keep the road from getting messed up). You could tell where all the bonfires were going to be because of the dirt piles. Yes they really were right in the middle of the street, cars just had to figure it out. Then people would add wood, branches and their displays. In this case they put a figure of the demon in the chair and burned it all up. 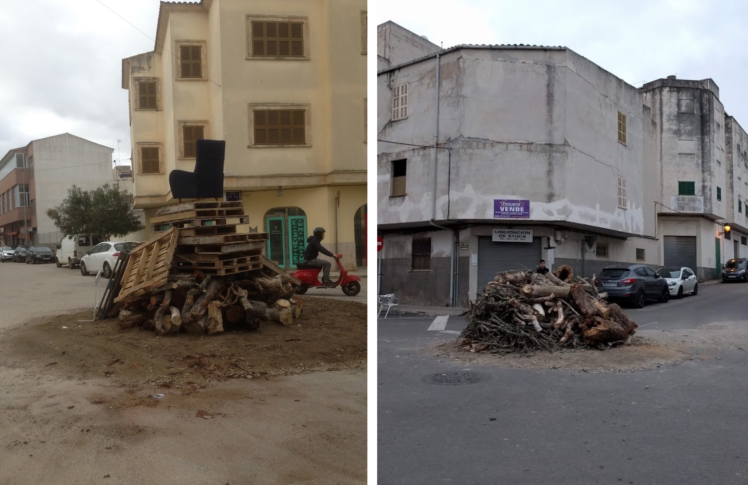 The Friday before the celebration there were multiple “communal barbecues.” Including one at Chris’s high school and my elementary school. We were a little reluctant to go because, well, what even is a communal barbecue? What does that mean? Fortunately Chris’s school held a dress rehearsal of the whole thing during class. They provided meat for all the students and everyone grilled and danced and chanted for 25 minutes then everyone went back to class. This was nice because Chris got a feel for what to expect and what to bring (bring your own tongs, napkins and bread).

We bought our special Sant Antoni sausages. They just showed up in the grocery store one day, so we HAD to try them. We went out at 8 pm and the party was already raging. The same dirt pile I had walked by on the way to school was now a huge community bonfire.

There were people everywhere. You had to squeeze through huge groups. Anyone claustrophobic would’ve died. It was an absolute mass of people. There were many grills all over the place. We picked one that wasn’t totally full of meat and slapped our sausages on it. Everyone grills their meat then wraps it in a piece of bread. So we did the same thing. We haven’t had grilled meat in years and it was really good.

People had herbal liquor, wine, beer, and some kind of honey/wine liquor they were pouring directly into their mouths. We heard chanting and excitement from my school just down the road so we headed there next. They were having a big bake sale with home made sweets. We bought some hot cocoa and cake, and watched our first dance. Some parents were dressed as Sant Antoni and the demons. They danced in the circle and one grandfather (drunkenly?) belted out the song. Almost everyone knows the chorus, but the song is in old-Catalan (think old English/Shakespeare), so many people have a copy of the lyrics on their phones to sing along with. Here’s the song in full.

It’s quite long and to sing the whole thing takes about 7 minutes. Most people just sing the first couple stanzas and then it’s over. The kids just like to watch the demons dance and to try to ring the bells hanging off of the demon belts. So most of the night was spent with the demons and demons running at the kids (and teens) to scare them. It was good fun, no one was scared or chased who didn’t want to be. Except for maybe the teenagers who at first were too cool to be scared by the demon but ended up running for their lives like the rest of them.

This was our first taste of it and we were all in. I was really bummed we couldn’t find any shirts. We felt like outsiders because everyone had their black sweaters and a red neckerchief on.  We tried 4 other stores but they were all sold out as well. I ended up getting a red neckerchief so I could feel like I fit in a little more.

The night before is when the big holiday is. So all the schools got out early. We went to school until 12. Chris’s school was having their own big bonfire that night and so they set that up. At my elementary school we couldn’t do anything, everyone was too excited. All the students were dressed up in the sweaters or as the demons. We just colored official coloring pages the city created. You could cut out your own demon mask. Then below it you could color the bonfire downtown.

We got out after recess and walked around to see all the bonfires get set up. This is the core of the holiday. Everyone (schools, restaurants, community groups) set up bonfires. There is a competition of the best bonfires and everyone who sets one up gets a free ensaimada (cake) and bottle of wine. Makes sense to me. It’s interesting because we’re talking full, big ol’ bonfires in the middle of a small alleyway between homes. Someone stands at the ready with a hose and then they burn it all night long. Also it’s not just a stack o’ wood – it’s a full display of Sant Antoni (and Company) doing something. Someone *not us* made a really nice video of what all of the bonfires looked like here.

Here’s a Jurassic Park themed Sant Antoni bonfire. No, it didn’t win. It actually got 5th place. Note how big it is compared to the people and how close it is to the apartments.

This bonfire was put on by the restaurant behind the display.

Here are two more bonfires, a house/window display and a truck (with working lights) that all got burned down.

Chris’s school is really into it and they made a big bonfire in the middle of the campus. They actually won 8th place for a nice display with a big tree and figures. A fun fact is they actually burn all the students’ old tests as kindling.

At 2 pm the Demon made his first official appearance. Our co teachers warned us that it was pretty boring, you just wait outside for an hour to see him when you’ll be seeing him all night. So we didn’t go. So we walked around to see how everything looked before it got burned. It was fun to just walk around with everyone else in town. No one was driving (traffic would be crazy and half the streets are shut down anyway). You could walk right down the middle of any road.

Everything was ready for the actual festivities to begin, but those will have to be in a seperate post.