We just got back from 11 days in the northernmost part of Spain known as País Vasco (in pink) AKA, Basque country. 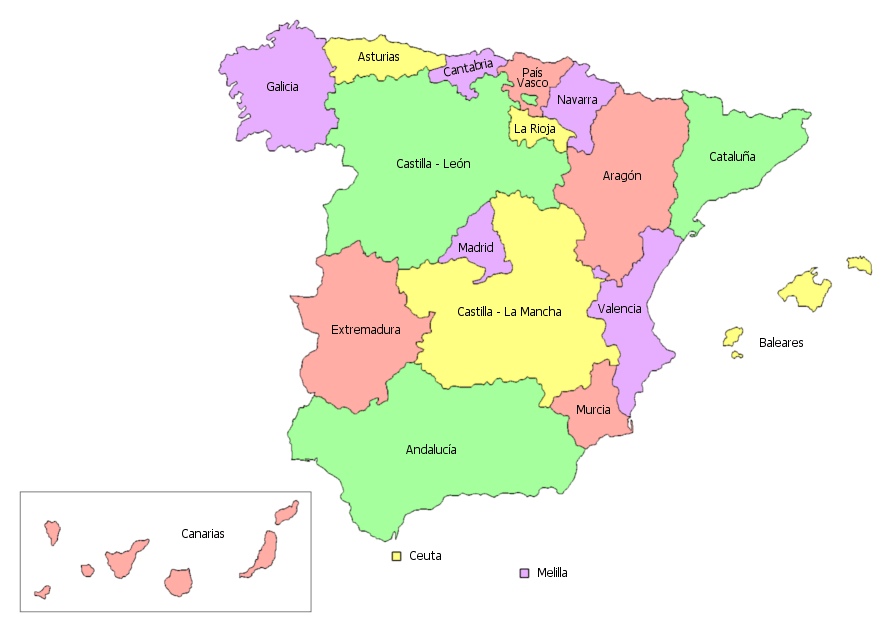 This is a different place. Like really different (and I’mma bout to tell you why). This is like the Ireland post where we just feel like we should lay out all the facts about it before posting what we did so you can appreciate the history a little more and so we don’t have to interrupt our stories with why something was the way it was.

What’s the difference between País Vasco and Basque Country?

País Vasco is an autonomous community of Spain (like a state or province but with more control over their rules and regulations).

País Vasco or Pays Basque in French, is also referring to a whole region of people who speak Basque and have a different culture. This region is part of both Spain and France. This is confusing because it is two things. An officially drawn state/province and a region that extends over two countries.

While we were there we saw them use the English term “Basque Country” to refer to the region (that includes France as well). So we will use it the same way.

When we say Basque Country we’re referring to a chunk of people and culture that extends into France. When we say Pais Vasco we’re talking about official state lines.

Spain is stereotypically arid, and hot. So it’s surprising when you go to northern Spain because, visually, it has more in common with Ireland. With just a 1.5 hour plane ride we went from hot, dry, and sunny to cold, damp, cloudy, and super rainy. It was also greener than Ireland, and I know that sounds crazy.

So the region is in both countries?

Yes, long before official borders were drawn by kings and queens and politicians this group of people were all together. They all spoke the same language After all the lines were drawn it ended up dividing the region

Do they really have a different culture?

Hell yeah they do. They’re super different. They are some of the oldest people/culture in Europe. They have likely never migrated as a people and some claim they have occupied the area for 10,000 years. They have wicked different costumes, dances, games, letters and language. They even have different blood.

Basque people have the highest concentration of type-O blood in the world. More than 50 percent of people living in the region have type O. Where the language was better preserved (aka where Basques only reproduced with Basques) the numbers are higher than 50%.

Besides that, loads of Basque people have Rh negative blood. 27% of Basques have this which is the highest incidence of it of any other people in Europe.

Rh negative blood is interesting for two reasons – one it’s theorized it comes from Cro-Magnon people. Cro-magnons are like cavemen with bigger chins, larger bodies and bigger brains.

Rh negative blood is also basically poison to a fetus. So it would’ve been difficult for the Basque mothers to carry to term. Modern medicine since the 1940s has stopped this but people theorize the reason Basque Country is so small is because the people couldn’t over populate with such high miscarriage rates. (Source here).

Here in Mallorca they speak Mallorquin or Catalan. It’s a different language, but it’s linguistically similar to French, Spanish, Italian etc. Likewise, English is similar to German and French, so on and so one.

The Basque language is similar to NOTHING. Linguists call it a “language isolate”. Initially they thought the language was brought to the region by hunter gathers passing through the Basque Country. But they can’t know if it was spoken by the farmers who were already living there. Either way the farmers spoke it or another group introduced it (10,000 years ago) and it became isolated in the area. While everyone else started speaking Indo-European languages they just kept speaking Basque.

The words and syntax are wicked different.

to say “I love dogs” you would say “Txakurrak maite ditut” (literally Dogs love I).

This picture is how to use a circuit breaker. Some are loan words introduced after electricity was discovered but you have to look carefully to see them (control, connect, central).

And even when they speak Spanish, they do it …differently. We’ve never had much trouble understanding anyone in any part of Spain when they speak. But for some reason Basque people were difficult to understand. It seemed like a lot of them spoke very quietly, almost at a murmur, with hardly any intonation. It’s weird.

Here is an example of Basque, through music. Also notice how the music sounds more Gaelic than Spanish

Scientists took samples from 8 skeletons found in a cave and after sequencing their genomes they compared them to other skulls from similar times from around Europe. They weren’t similar, genetically to anyone. In fact they showed that they were some of the first farmers. The scientists say this “suggest[s] that Basques and their language may be linked with the spread of agriculture during the Neolithic [period]” Source. So they may have been some of the first farmers in Europe. The skeletons were between 5500 and 3500 years old but the genomes 8000 to about 5000 years ago.

The genomes also showed very little mixing between groups (we can obviously see this with the blood type). But even 8000 years ago they weren’t moving around and breeding (or groups weren’t arriving and breeding). They’ve always been their own group.

This is really only relevant to the skeletons from way back. Modern Basque people don’t have distinct genes. They do have different everything else, as we’ve listed.

They have traditional games that are very farmer-based competitions – who can chop this wood faster? Which oxen can carry super heavy rocks further? Who can pick up/drag this heavy rock more? The games are still carried out today except now people are doing it with ultralight sweat wicking fabric and helmets.

Every museum wants to tell you about how sea-faring they are as a people. Its true they have always been good fishermen and navigators. In fact many, many of them went on to colonize America. Including naming many of our cities (Hello Durango!).

The problem with all of this was Franco. Franco was a dictator who wanted Spain to be his version of Spain. and his version of Spain was a bullfighting, Spanish speaking, Christian, paella eating homogenized group of people. Screw Catalonia speaking Catalan or Pais Vasco speaking Basque. Everyone basically needed to be Andalucian. You can’t name your kids Joan in Catalonia or Ainoah in Pais Vasco they need good Christian names like Antonia Jesus or Jesus Antonio.

So for 39 years laws dictated baby names or only speaking Spanish. Areas have only been able to start recovering their original cultures since 1975 (when he died) or more likely in the 80s when all the autonomous communities created themselves and their own rules.

Some people say Basque Country is a “stateless nation.” It really is since everyone is different and they identify as being different. The problem is an international country line goes right through their region. Since forever they’ve wanted to be their own country. You can see it everywhere when you go through it with banners, stickers, and posters.

Between 1959 and 2011 the Spanish government was at war with the ETA (Euskadi Ta Askatasuna, Basque Homeland Freedom). The ETA were officially classified as a terrorist group. During those 52 years some 1,000 people, mainly police and civilians.

In 2011 the ETA threw in the towel, and agreed to peace terms with Spain and France. Every so often they find weapons caches throughout France and Spain, but things have been completely peaceful since the late 2000s.

Despite the peace and the ceasefire, the region still yearns for independence.