San Sebastian’s last gift to us was food poisoning. But only for Chris. He woke up and suffered the all the symptoms associated with food poisoning, but since we had a schedule to keep (checking out, and getting a bus to our next destination) he decided to push through.

While K went out and got us breakfast, Chris stayed in and threw up all the fancy cheese, artisanal apple cider, and fresh cherries we’d feasted on the day before. If you remember, Chris normally hate cherries, but had given them a chance for the first time in years. After this latest betrayal he can safely say that he really hates them. CURSE YOU SAN SEBASTIAN!

After buying some “anti-throwing-up” medicine from a pharmacy, we hopped on the first bus out of this cursed town, and to our next destination, Hondarribia. It was the worst bus ride Chris has probably ever had, thanks to the nausea and the twisty roads.

We got to the hotel in Hondarribia at 12, hoping for nothing more than to be able to explain our situation to the hotel staff and maybe check in early (normal check in was at 16:00). The desk guy just happened to be there, he had been about to take some time off for lunch, and he was more than sympathetic to our situation. This guy was nice, maybe too nice, he kept wanting to chat with us while all I wanted to do was lie down and die a little.

Most of the rest of this day was spent laying in bed. Eventually when Chris felt stable enough we went out and got some lunch and even some ice cream. We walked to the river and got our first glance of France, just on the other side. We even walked up a pier and across what technically constitutes a national border.

The photo above shows K with one foot in Spain and the other in France. The only indication that you have crossed a border in Europe is when you get a text message from your cell provider. It’s always a huge message with the location and phone numbers for all of the Spanish (since our phones are Spanish) consular offices. 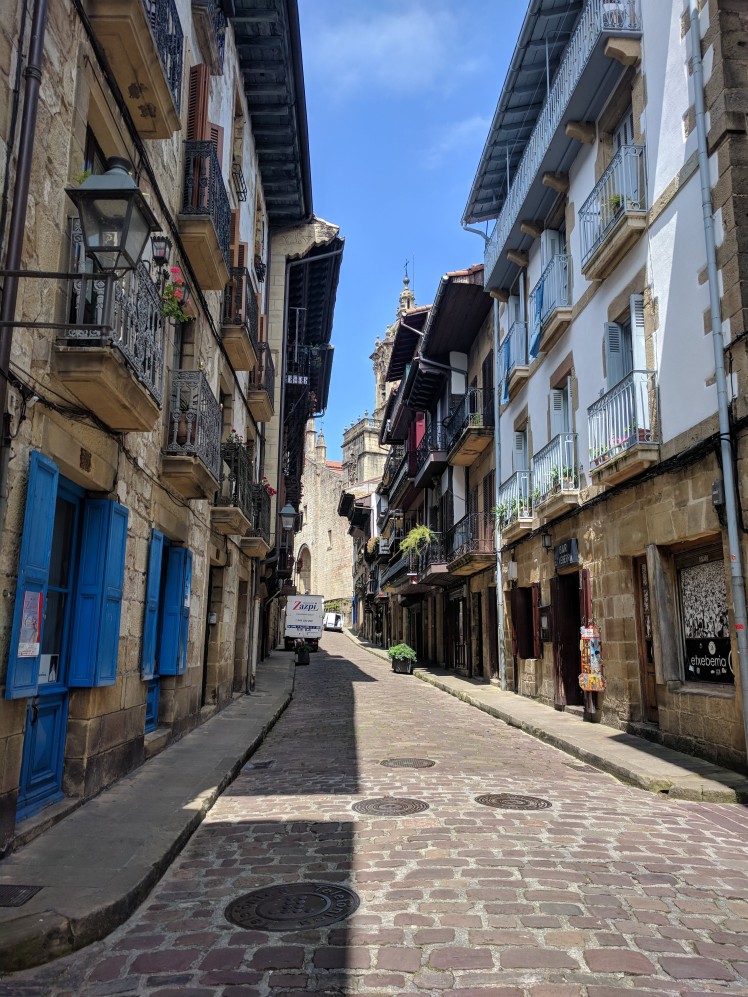 After putting one foot into France, we retreated to the hotel so that Chris could try and feel better. The next day he woke up feeling 100%, which was great because we planned this day to be our true expedition to France.

From Hondarribia you can take a 5 minute ferry ride across the river, or you can backtrack and walk 3 miles through the Spanish town of Irun across a bridge, and finally into the town of Hendaye, France. We decided to make a loop of it, walking there in the morning and then taking the ferry back at night. 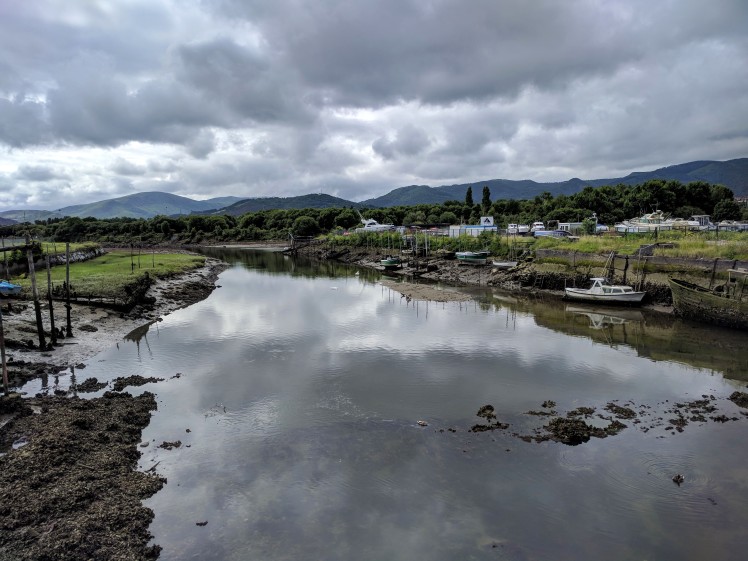 Our first destination in France was the French supermarket, Intermarché. We spent at least two hours there drooling over all the awesome groceries that just DO NOT exist even five minutes across the border in Spain. Spain has a really bland selection of groceries, and it sucks. So whenever we go to a new country we are blown away by the sheer variety of things. We ended up buying some deodorant, charcoal toothpaste, freeze dried French and Moroccan soups, beer, a chocolate bar with corn nuts in it, pomegranate wine, some goat cheese/red pepper flavored potato chips, a bag of pickled olives/onions/peppers/cucumbers, tikka masala Pringles, and some fancy coffee. These are our favorite kinds of souvenirs.

Here we confirmed a theory that we had been working on since our first few hours in Hondarribia: That, in perhaps the strangest case of reversed expectations of all time, the closer you get to France, the nicer the people are.

In this corner of France at least, everyone was as kind as could be. Even the teenagers loafing about outside the supermarket, when we walked by them and they heard that we were foreign they started whispering amongst themselves, but it wasn’t the “f*cking tourists, go the hell home” that we were expecting after San Sebastian (and let’s be honest, Mallorca as well). No, it was more of the “Whoa, cool, foreigners!” attitude.

And as with most border areas, everyone spoke at least 4 languages (in this case French, Basque, Spanish, and English), and you never know which someone is going to prefer. So when the grocery store cashier started ringing us up she greeted us with a “bonjourkaixoholahello!”. While we were shopping we were following a little old couple who to each other spoke Spanish in one aisle, and in the next spoke French. Then when they needed help getting something from the top shelf they asked me in a combination of both with some English thrown in there for good measure.

Hendaye was proving to be awesome. 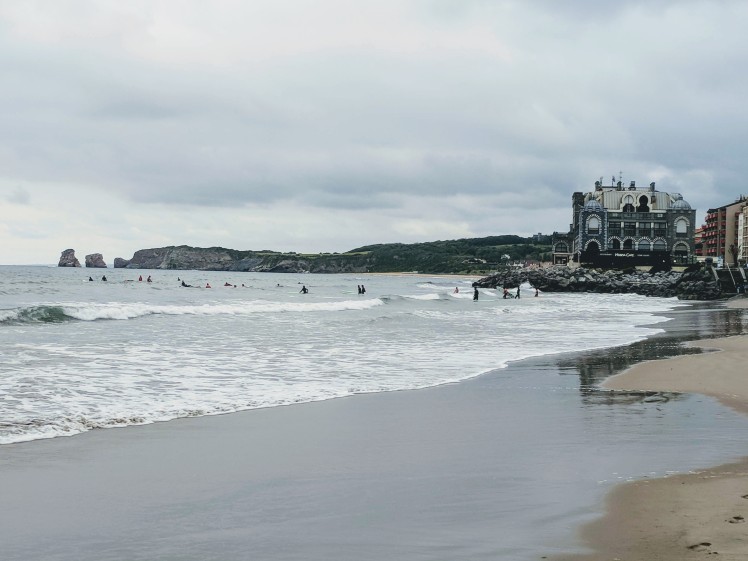 From the grocery store we went to a crepe restaurant where we both got sweet and savory crepes. We got the simplest/cheapest options but they were still amazing, the savory crepes had emmental cheese, meats, caramelized onions, and an egg. The sweet crepes were even more simple, and yet more delicious with a choice of sauce (honey, caramel, nutella, chocolate) and nuts.

Then we went to the beach, which was lovely and quiet, and we spent about 2 hours there making a sand castle until we got tired and decided to take the ferry back to spend the rest of the day properly exploring the old town of Hondarribia.

Hondarribia had originally been a simple fishing village. But centuries of war between Spain and France led to Spain building a huge fort on the highest part of the village. The original walls are still mostly intact, though unlike Derry you can’t walk on them anymore. But the modern urban developers have worked hard to incorporate the defences into the modern infrastructure. 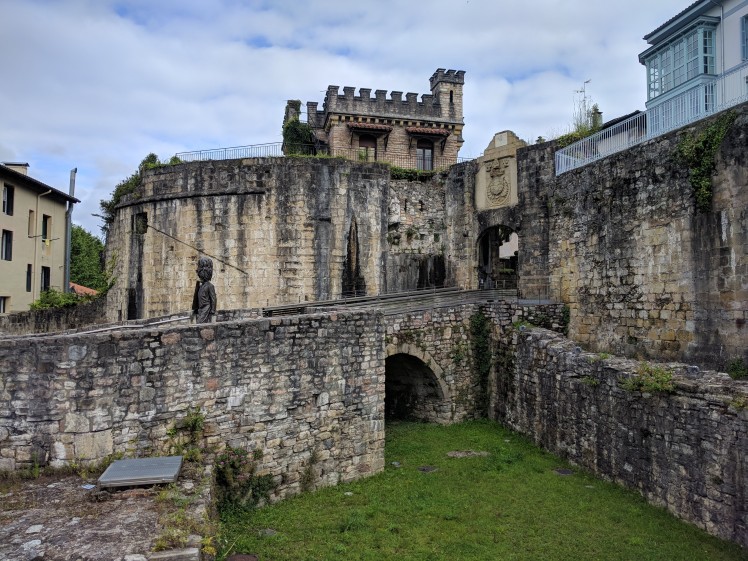 For example, the only way to get into the old town from the west is to walk across a bridge starting at what used to be an outlying fort, over a current road, and through one of the original gates (pictured below).

The castle in the center of town is currently a 5 star hotel/restaurant, and is still pock-marked from cannon/musket ball impacts courtesy of the many battles/sieges this town has seen.

One particular siege is actually pretty interesting to learn about. 1,300 Spaniards (soldiers and civilians) held off some 20,000 French soldiers during the 30 Years War (1618-1648). The siege ended up lasting 2 months, and towards the end the city was only held by 300 Spanish survivors, and would have fallen in a few days had it not been for a massive Spanish relief force showing up in the nick of time.

And now every 8th of September the city holds a massive parade in which an average of 5,000 town folk dressed up as soldiers march up to a monastery to recreate the pilgrimage of the people/soldiers who withstood the 2 month siege.

We finished our day in the hotel room eating the french snacks and drinking the french beer/wine that we’d hauled across the border.

The next day was spent entirely in transit. And we just managed to get all the way back home in a single day.

And now our summer begins, we are looking forward to going to the beach a lot, and since we don’t have any vacations planned you can expect some Mallorcan adventure posts, recipes, and whatever else kind of posts coming up!

One thought on “Let’s go to France!”