Our last installment of our road trip brought us through Texas and to New Mexico. As our neighbor state you would think we would’ve seen more of it – but we had never gone to some of the big sights – Carlsbad, Roswell, and Chaco Canyon. We had a ton of fun going to all of them – they lived up to their reputations.

We first headed to Carlsbad Caverns NPS. Like Mesa Verde you have to drive up, up, up for a while. The cool thing was realizing you were going to walk (or take an elevator) back down (but inside the earth). We weren’t sure if we wanted the elevator but decided to hike it. It’s a paved walking path that just descends down switchbacks (not really a “hike”). There’s a really neat part where you walk down and just see a gaping hole: 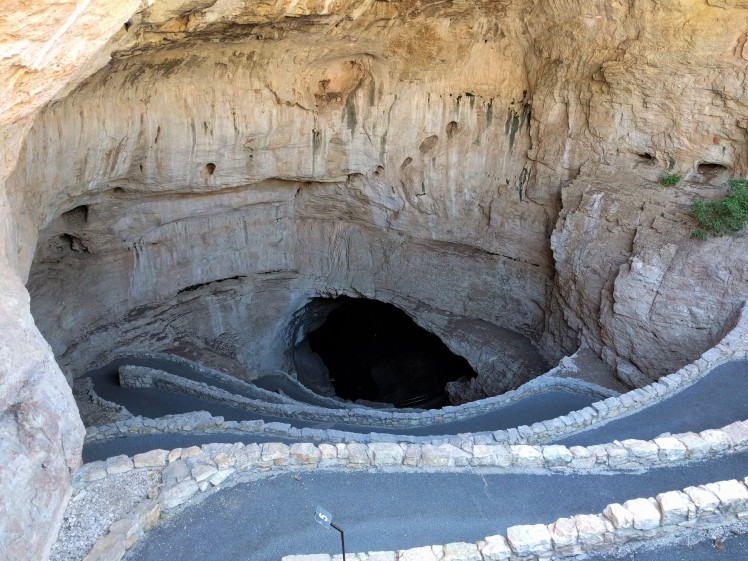 You, of course, head into the darkened hole and it’s a whole new world. 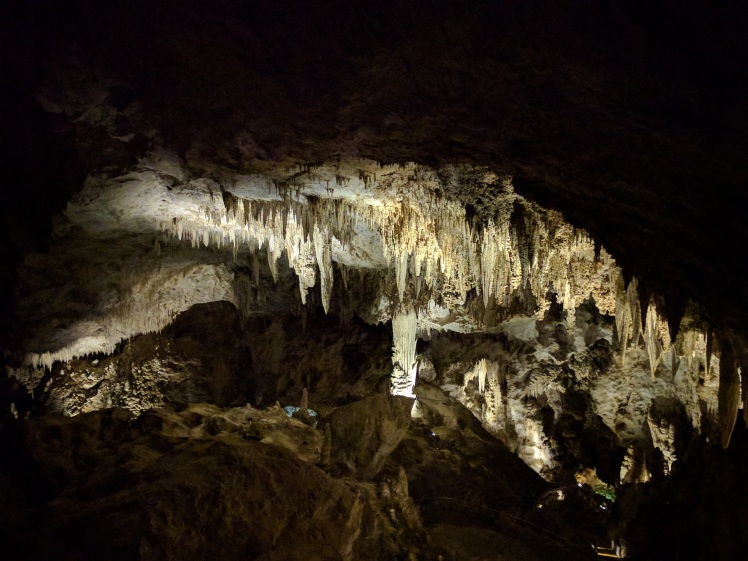 They had emergency telephones to report other guests doing something bad/destructive to the caves (which is a great idea!). Also the kids had helmets with headlamps on them. The path was lit at your feet but there were gaps between lights that kids could struggle with. So that was neat.

We walked to the bottom but there was still a lot to see walking back and forth all around the elevator area.

We took the elevator back up and drove to Roswell, New Mexico. It wasn’t as touristy as we thought it would be. Sure there were tons of alien things but it wasn’t as over the top as we thought. We went to the alien museum, er, the International UFO Museum and Research Center which made up for the rest of the town’s sanity.

It was a wild ride. It went over an hour by hour detail of the Roswell incident in question then devoted the rest of it to other UFO sightings and proof the Mayans had help from aliens and stuff. The Roswell bit was actually pretty convincing at times but the rest of it got so weird it lost its credibility.

We slept in Las Vegas, New Mexico. At this point we were just looking for random things to do in our NPS passport. We found Pecos NPS which we had no idea what it was so we just headed there. What is it? Pretty much everything – Puebloan ruins, a former 1600s century Spanish mission, a Civil War battleground, and a 1920s ranch. It’s a medley of history. The main attraction is the Pueblo and information on the Pueblo Revolt

From here we headed to Chaco Canyon and got pulled over for speeding just outside of Albuquerque. This is the first and only time this has ever happened and honestly it was because we had Colorado plates. We were barely keeping up with a huge pack of yellow plates and were getting passed like we were standing still.  We were the only people who actually pulled over when we saw lights. Everyone else got smart and just left. It was a real bummer because we were on Jicarilla Apache Nation land so it was more expensive than a state trooper pulling us over. Whoops.

The road to Chaco was extremely bumpy and slow going. We made it with perfect timing to get one of the last spots at the NPS campsite.

We took a short hike on the trail to Wijiji. Wijiji is unique in that it was probably built all at once (rather than over time) and also it has no kivas. What’s up with that? 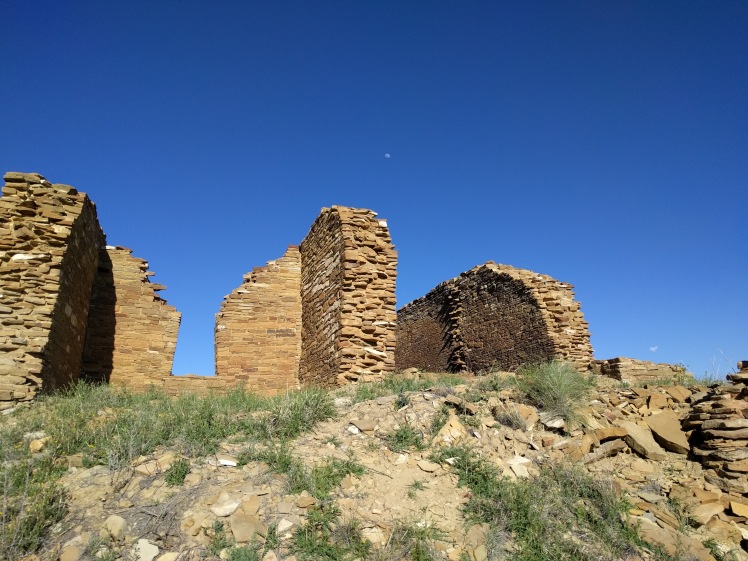 Nearby is some pretty well preserved rock art. 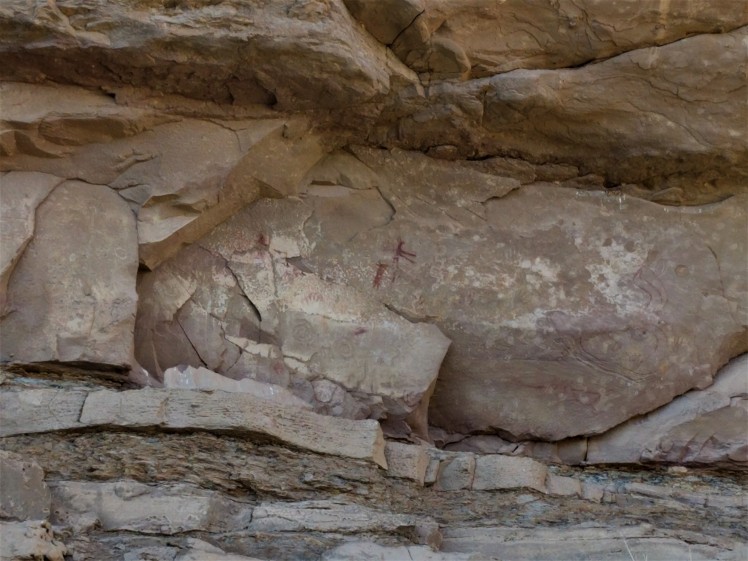 The next day we drove around to see the whole site better. It was amazing how much they let you walk around inside and through it (rather than looking from afar like at Mesa Verde). 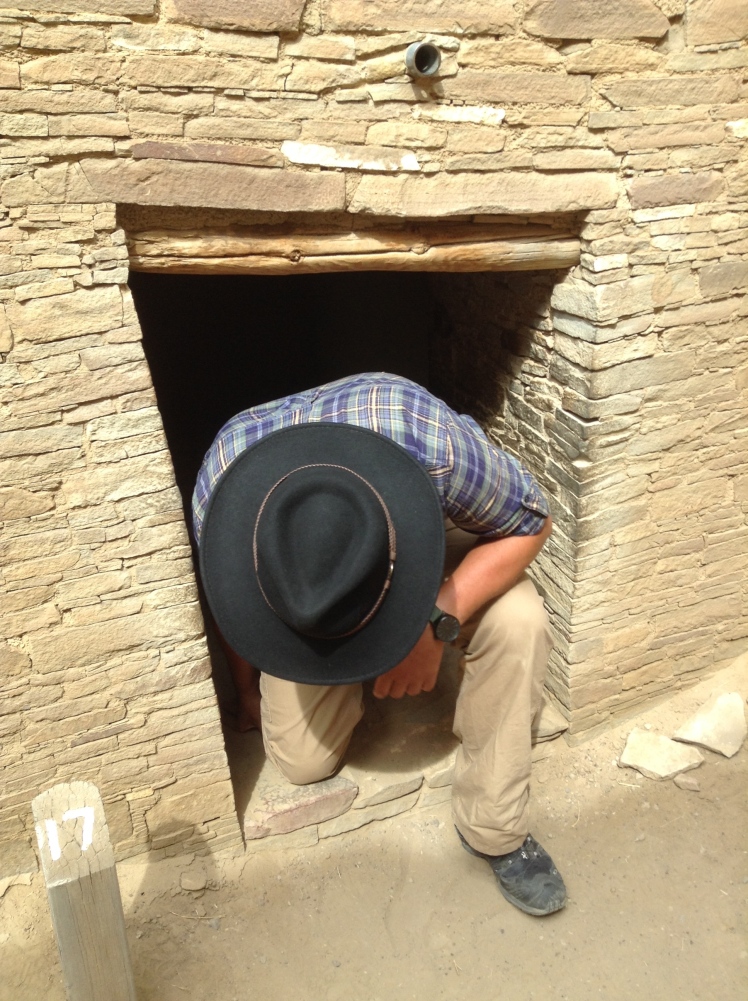 We also took a really great hike. We picked the Pueblo Alto Trail since it was only 5.4 miles (not the longer 8 mile one). We had to fill out a permit that basically was only to identify our bodies if we really goofed up. It was in triplicate and we were instructed to keep our part safe. We had good shoes, loads of water and good hats so we were more prepared than the family of 8 that headed up with only one bottle of smart water before a flash flood.

You crawl up a slot canyon for a bit then you walk to a great view of Pueblo Bonito. 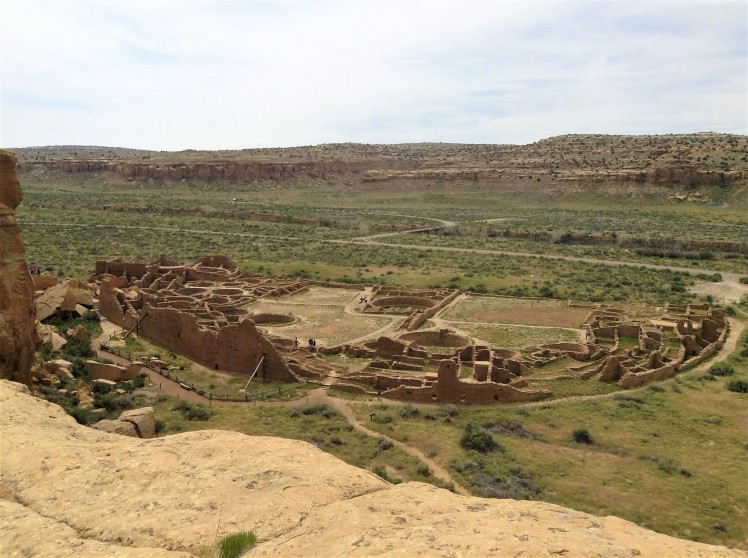 There are pecked out stone basins, a good view of some stairs then you go up to New Alto and Pueblo Alto.

We met this guy who blessed our journey.

By then it was thundering and raining in the distance so we power-walked-hiked real quick out of there.

Chaco and New Mexico were the last places we saw on our big April Road Trip. When we got back we only had a month to plan the wedding and then we were off again on our big Honeymoon Road Trip.