We’ve made a goal to spend our summer exercising, studying Spanish, and adventuring around our area. Part of this list involves hiking every Friday.

It’s about 93 degrees every afternoon. So on Hike-Fridays, we get up at 5 in the morning to get a head start. The sun rises at 6:55ish, so by the time we’ve had breakfast and groggily gotten dressed we have a little over an hour before sunrise. This means we can walk to the trail-head using the city’s street lamps. It’s a great system to avoid the heat of the day. This, however, didn’t help us on our hike to El Pico.

El Pico is shortened from El Pico de Jabalcuz but that’s not even the real name. The trail sign called it El Cerro Jabalcuz which just means “The Jabalcuz Hill.” This name is incredibly misleading, because El Pico is the tallest mountain in our area coming in at 5,200 feet (1,584m). Martos, our starting point, is only 2,500 feet (762m) so we gained 2,700 feet (822m) on this hike.

Most people around these parts just call it El Pico de Jabalcuz, or “The Peak of Jabalcuz.”Jabalcuz is just a small little mountain village between Martos and Jaen.

This hike was a matter of redemption. We had tried to do this hike a few months back, but were chased away by lightning. So we figured we could skip the first summit (La Grana), take a more leisurely route along some farm tracks, and go directly to the summit of El Pico.

Here is our tracking watch – we didn’t start recording our distance until we were a mile from home. And the watch died before we made it back. It says 16 miles but we know it was at least 19 miles. 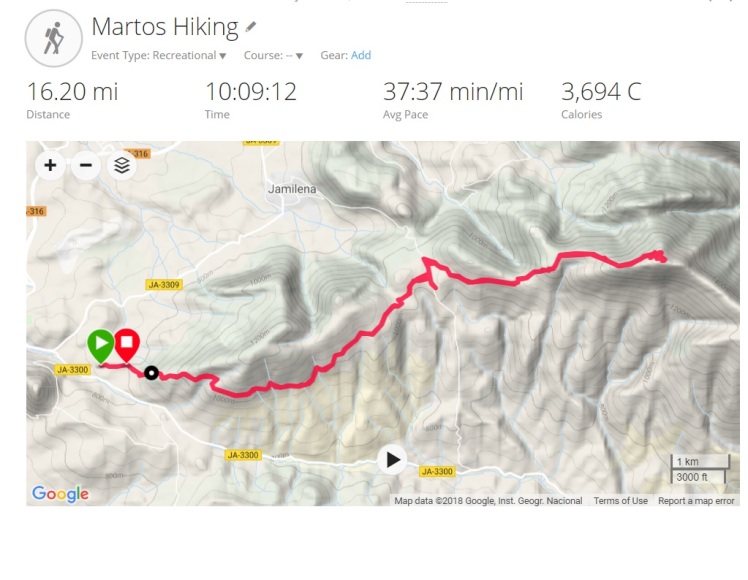 At about 5 am it was 60 some-odd degrees (which would go up about 2 degrees every hour). We grabbed 6 liters of water (1.5 gallons) and snacks, we had packed sandwiches the night before. Then we were off.

It was still dark but the moon rise was actually at 5 so we caught a nearly-full moon over La Peña.

We then got to see the sunrise looking just over the other hill. It was practically a tandem moon and sun rise. 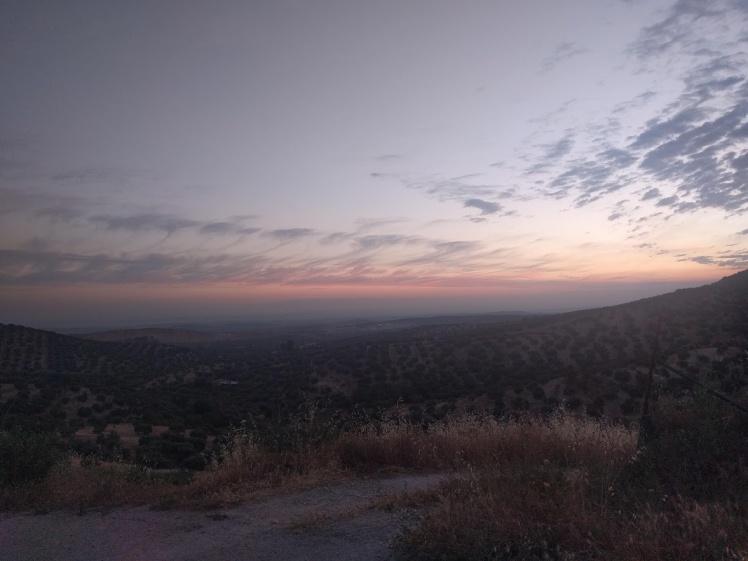 By the time we made it up to the first hill (to go down into a valley then back up) the sun was up. This would be the last shade we would have all day

We hiked up and down. Up hills, down into valleys, then right back up a new hill. The sun was fully up. After the path evened out a bit, we found ourselves walking along a fence separating someones land from some incredibly steep slopes on the left. The guy who owns the land had driven his car up and was just sitting under a tree on his side of the fence.

He was relaxing in the shade just watching us slug up this monster hill. He had a hell of an accent and was excited to tell us about all the things we were doing wrong. “It’s too hot to go up there” “There are too many thorns, you need pants” “It’s too late in the day” “The bugs are going to eat you up” “Seriously, you need pants.”

Little did he know that at this point we had already hiked 8 miles. The thorns, bugs, and sun had already gotten under our skin – metaphorically and literally.

The problem was this man was sitting in the only shade on the whole hike. We were desperately hungry for lunch and wanted to plop down in the shade and eat. But he would probably just keep talking to us from across the fence. Sometimes you don’t want to talk to people. And sometimes you really don’t want to talk to someone in a foreign language when you can’t understand him. “Buena’ dia’ ‘ac’mu’ho calor. Solo lo’ ingle’e’ sale’ ne’ e’te calor.”

We thanked him for his council, literally told him “we’ll think about what you said.” And headed uphill. We obviously couldn’t find shade but we also couldn’t find anything flat to sit on. So we slammed our sandwich as fast as we could just squatting on the trail. So much for resting our legs.

We only managed to rest for 4 minutes before a new and horrific bug was crawling all over me. Think some bastardization of a stick bug, a leaf bug, and Satan himself. He was very persistent and no amount of smacks would remove him from my body. As soon as he was knocked off he would scramble to get back on me. His love was unrequited, so we stood up and did the only thing we could – kept hiking uphill.

We said we would think about the farmers words, and with nothing to pass the time, we did think about his words.  Maybe it was too hot, maybe it was too far, maybe we needed pants. The way he had described the bugs (by shoving a pointed finger into his leg) sounded like ticks which was worrisome. Either that or he was warning me that Satan’s Stick Bug was going to attempt something a little more.

We could see the summit, which was frustrating, but we had no way of knowing how much longer it would take.

We’re stubborn bastards, though. And finally, after 5 hours and 45 minutes, we made it to the top.

What kind of views were we rewarded with? Well from here we could see our entire province. We could look down into Jaen city and way off in the distance, we could see snow peaked mountains that were either the Sierra Nevada (near Granada), or the Sierras Cazorla (the second largest Nature Park in all of Europe).  We could see the tip of Martos so far back. We could see Torredonjimeno, Torredelcampo, Jabalcuz, and countless other villages that we don’t even know the names of. Despite taking many pictures of the views from the top of El Pico, not a single one of them managed to capture the snowy mountains.

Getting back was somehow harder.  It wasn’t all downhill since we had to go through so many valleys, so there was little relief for our legs. Since it was truly the heat of the day it was around 93 in dry, desert heat. The gentleman wasn’t still in the only shade but the sun had moved enough it was basically gone.

There were olive trees everywhere (obviously) but they’re too scrubby to provide shade, plus they were covered in herbicide.

Somewhere around here Chris figured out what sombrero means. Obviously, it’s the word for hat. But as we were struggling to find shade we noticed that the only shade to be had was provided by his hat. Then he remembers that sombra is Spanish for shade, and ero means something like maker. So a sombrero is literally a “shade maker”. The mind wonders when you’ve been hiking for 8 hours straight.

With a few hours left to get home we just stopped and sat down right in the middle of a dirt road. We knew people wouldn’t be driving on it since it was siesta. Everyone was at home in their air conditioned homes, maybe napping. We considered truly siesta-ing and taking a nap to wait it out. But after some potato chips and another 1/2 liter of water we pushed on.

We made it home after siesta ended (around 5 pm). We had been on our feet for 12 hours now, minus the 10 minutes we actually got to sit on the road. Of those 12 hours we had been actively hiking for probably 10 (not just standing around drinking water or taking pictures of the summit). We had underestimated this hike’s length. Although we had done really well with bringing enough water and food.