We drove 1 hour to the Medina Azahara – an archaeology ruin of a palace said to have been bigger and more beautiful than the Alhambra. The Azahara is just outside of Cordoba.

There used to be huge emirates (kingdoms) within Spain’s Moorish territory- the Emirate of Granada and the Emirate of Cordoba. Granada’s king’s “castle” was the Alhambra while the king of Cordoba lived in the Azahara. “Medinat al Zahara” is the real name but it’s been blurred together to be Medina Azahara – it literally means “the bright city”. It’s was called “too opulent” by many and was certainly far more beautiful and elaborate than the Alhambra.

Now there are only walls left: 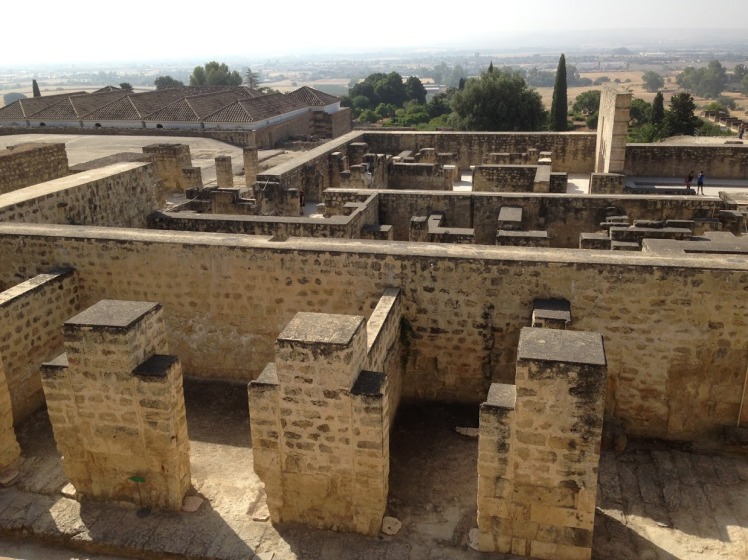 They began building it in 936 . It was finished about 10 years later.  It only lasted about 80 years, though. Civil war within the kingdom of Cordoba destroyed both the palace and the entire kingdom (Caliphate) of Cordoba. The palace went into decay and was basically forgotten about for almost 1,000 years. In 1911 excavations began but then the Spanish Civil War put things on hold all the way until Andalusia became an autonomous community in 1985.

There’s a brilliant video made by the government you can watch here. We took screencaps from it to show what it would’ve looked like versus what it looks like now. Full credit for the screencaps go to the Junta de Andalucia. 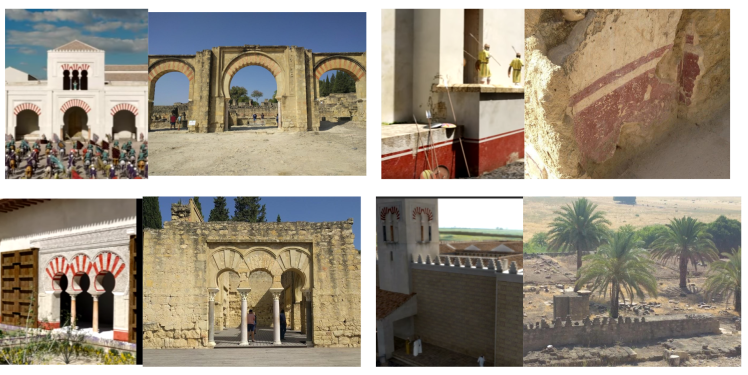 All that’s left now are large walls and a bit of plaster. In doorways you can see some original marble flooring. It’s extremely difficult to picture what it would’ve looked like – even having seen many alcazars, alhambras and alcazabas. It’s a huge mess – it’s on many tiers and there’s nothing left but doorways and a couple latrines to give you any clue what you’re looking at. The poor museum signs even say “we’re not fully sure what this room was for.” That history is lost.

Honestly Mesa Verde is easier to look at and imagine (Pueblo 1 period is actually the same age as the Medina Azahara). This has only been getting 33 years of TLC from archaeologists. It goes to show what archaeology is good for – both to keep it in good shape and to give visitors some context.

It was only a 27 minute drive to the next city – Almodovar del Rio. This is an old little city with a massive castle perched above it. This was the most concerning drive for us – it has extremely tight medieval city streets and we needed to find parking. There isn’t any parking, because, again, it’s a medieval city. They didn’t have city planners or, you know, cars, back then. We wanted parking because there was no way we were going to drive around a mini-village all day. We were going to go on foot, so we wanted to abandon the car overnight.

We drove down the steepest, tightest little roads and made it to a parking garage.

We did a thousand-point-stop to get a parking spot between two sideways-poorly-parked-cars. There are only 2 public parking lots in town so we had to take what we could get. As soon as we were parked (a 5 minute ordeal), another family got in and left. So we did another thousand point maneuvering into their better spot. The car had a built-in proximity alarm and needless to say it sounded like the world was ending inside of the car. BEEP! BEEP!! BEEP!!!! The spot was so tight it was alarming on both the front and the back of the car – but what else can you do? I got out and guided Chris in, we were finally ready to abandon the car until the next morning annnnndddd a tiny little sign behind a wall said “all cars must be removed by 9 pm. No overnight parking.” F word. We maneuvered out of that tight little space and on the way out of the parking garage – oops.

We heard the scraping but there was nothing else to do but power through. There isn’t anywhere to back up (you’ll hit cars) or go forward (you’ll drive into someone’s living room.)–  You can’t make a 90 degree angle turn on a dime, so you just have to push through the turn. And if pushing through that turn means scraping the side of your car against someone’s home- then that’s what you’re gonna do.

That’s why we paid for insurance.

We found a more primitive parking place further away that was actually just an abandoned lot. Hooray.

We checked into our hotel. It was a refurbished old home – all traditional with restored tiles, walls and decor. Everything was original from the 1800s. The couple who owned it was very proud (deservedly so) and gave us a very grand tour of everything. Funnily enough we were the only people in the whole hotel that night.

We went out for lunch and had the best salmorejo we have ever had. Salmorejo is like the best tomato-garlic soup you’ve ever had in your life except it’s cold and thickened with bread. We feasted on our favorite things ever – the salmorejo, berenjenas con miel (fried eggplant with molasses), and some of the most tender, delicate and fatty pieces of grilled pork you’ve ever had in your life. It was some pitiful little dive bar (called “Bar Izquierdo”) but it had the best food we’ve had in Spain.

Funny thing was their tapa (free food for buying a drink) was just a toothpick shoved in a chicken nugget. Initially you would’ve thought they had terrible food.

The whole reason we came to Almodovar del Rio was because of the castle. Every time you’re in or near Cordoba you can see it. You can’t just pass by such a majestic castle so many times without finally going. 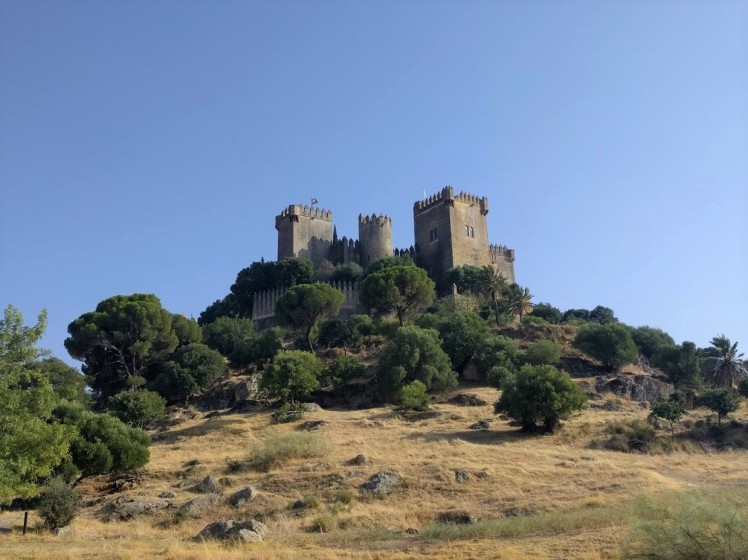 Oh, and what’s that? It was another Game of Thrones filming location!? Here are the relevant clips from the show. 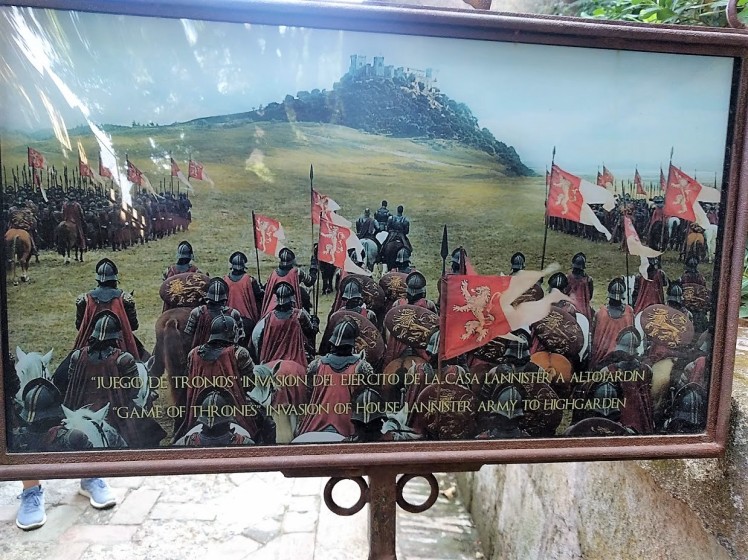 Like everything else in Andalusia – Romans and ancient local people have always built there, then the Moors built a nice castle on top of all their stuff. Then the Christians inevitably took the castle and now here it is. This castle was actually terribly decayed until the man who inherited it fixed it up.

The man was actually the rightful owner, the Count of Torravala. The castle is actually still in his family. This is not a government owned castle but his pet project. He also built in some living quarters the family might still use.

It’s too big to accurately show in pictures or to even talk about. It is huge. We spent maybe 3 hours walking into every tower and seeing everything. It has some kitschy stuff like a replica sword museum and some silly videos about the place. But it’s overall very well done.

The Count, A Game of Thrones Scene, and then us in the same place.It was a really unreal place to explore. You never knew what the next tower was going to bring – a legend, a diagram of the battles it had been in, more Game of Thrones filming locations, a ghost story. Seriously some Moorish princess lady was imprisoned in a tower (god, how much more Disney can this castle get!?) and died. So she haunts everything and everyone forever because she just wanted to marry a guy who rode on a white pony.

We pretty much closed this castle down. No joke they stopped piping in medieval music (they actually do keep medieval music playing over the speakers the whole time) to announce it would close soon. How many people can say they’ve closed a castle down? 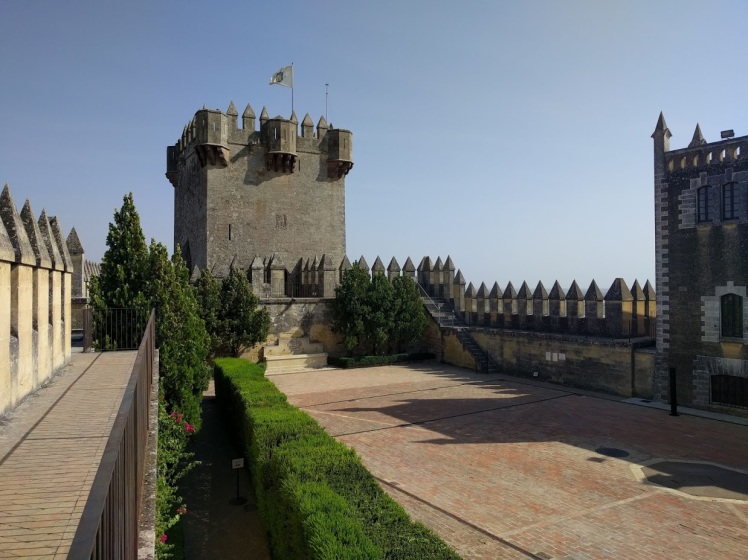 We went to a strange restaurant that gave us free shots (and fruit juice) in test tubes (the photo above). Almodovar was a very silly but fantastic place.

One thought on “Andalucian Road Trip: Day 2 – Archaeology and Almodovar”