If we had had a car, it would have taken just about 50 minutes to get to Segovia from Avila.

But we didn’t have a car, so we had to rely on the train network. In some ways, it was nice to be on trains again. It felt kind of like the first time we came to Europe when we were in university. But in other ways it was a huge pain in the ass.

This 50 minute journey ended up taking 5 hours, mostly because the trains in Spain suck. We ended up having to transfer trains in Villalba, a little town with a dog park and nothing else, which we waited in for over two hours.

But in the end it was all worth it, because Segovia is seriously cool. 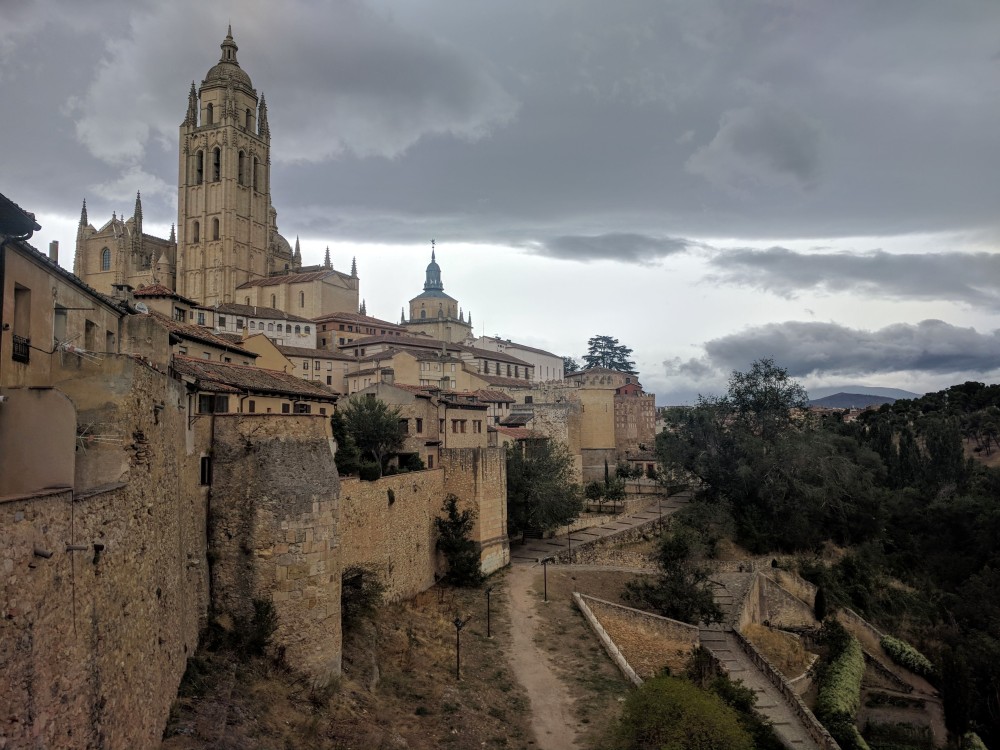 There are two things in Segovia that attract visitors from all over the world.

We’ve seen tons of Alcazars. Alcazar is just the Arabic word for “castle”, but as the years have progressed these castles were turned into crazy opulent palaces.

This particular Alcazar most likely inspired the castle at Disneyland, and once you see it it’s easy to see why.

It sits on top of a huge triangle shaped promentory in the middle of a large valley with two different rivers coming together at the point. The Alcazar shared the top of the promontory with the old medieval town, which is also a serious treasure to behold.

The history of the castle is interesting enough, but nothing super special. You can pay to go in and tour the rooms of the palace, but it’s not as interesting as…say the Alhambra in Granada. There is also a small museum dedicated to the artillery academy that was located in the palace back in the 1800s, but it’s all in Spanish (we did enjoy learning some weird vocabulary there though).

We spent most of our time in this town climbing up and down the steep hills trying to get to all of the different overlooks to get the best view of the alcazar, and it was totally worth it.

#2 The Aqueduct of Segovia

We’ve seen aquededucts before (mostly in Almuñecar, but this one is considered to be one of the best preserved in Europe.

This 1,907 year old aqueduct was built by the Romans and used to be 11 miles long, drawing water from a river way up in the mountains. It brought water all that way, right through the old town, and straight into the alcazar. There were even filtering stations that would take out all the mud and whatnot.

A lot of the aqueduct was actually underground, but to allow the water to flow into the elevated old town a massive aqueduct bridge was built right in the middle of town.

It was so useful that every group of people that conquered Segovia ended up maintaining it. It was actually still in use up to the 1800s.

All that stone is unmortared, and still it’s lasted this long.

Parts of it were destroyed back in the day, probably whenever the city was under siege, but like I mentioned it was always put back together because it worked so well.

So obviously, those are the two big landmarks that Segovia has, but what else did we do?

Our hotel was in the old Real Casa de La Moneda, or the Royal Mint. This is where the Spanish crown minted most of their coins. The site was abandoned until recently when it was restored by the city of Segovia to (almost) working order. The city included a hostel, a restaurant, a museum for the mint, and an interpretation center for the aqueduct. It was seriously cool.

All of the machines we built according to the original designs. They were powered by water wheels, and they all worked perfectly well.

Segovia was probably one of the prettiest towns we’ve seen in Europe, right next to Avila.

One thought on “Segovia”